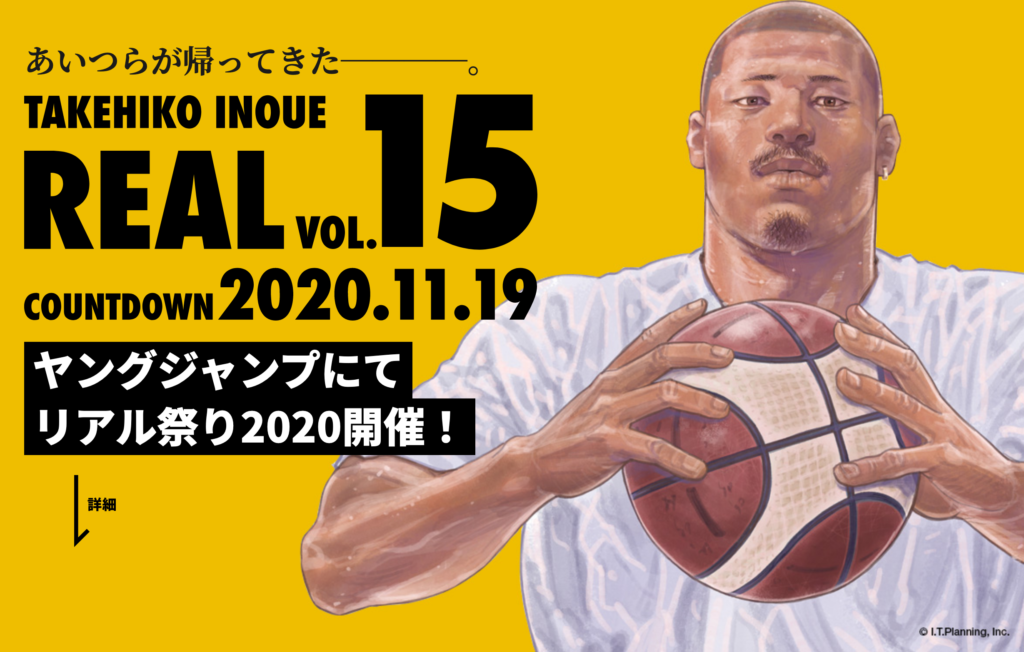 Takehiko Inoue surprised us all when he came back to Weekly Young Jump last year to continue his excellent wheelchair basketball manga Real. Alongside Vagabond, the series had been on hiatus for much of the past decade and released its last collected volume in 2014, but it seems as if Inoue is more or less back in action: Real volume 15 releases next week, constituting its first collected volume in six years.

Shueisha knows full well how big of a deal this is and is planning to hold a “Real Festival” in the pages of Weekly Young Jump leading up to the release of volume 15 and beyond. In issue no. 48 (goes on sale October 29), there will be a series of interviews with real-life professional wheelchair basketball athletes; in no. 49 (November 5), there will be a special feature on the characters of the series as well as messages of support from fans; and, starting in no. 50 (November 12), Real will begin an uninterrupted two weeks of serialization. A “guidebook” will also be published.

Following Real volume 15’s release on November 19, there then will be a special “present” to celebrate as well as an interview with Yuta Tabuse, the so-called “Jordan of Japan,” in numbers 51 and 52 respectively. They go on sale November 19 and November 26. Phew.

That’s a lot of content planned to mark the release of Real volume 15, but more eagle-eyed viewers may be wondering: how come it took them so long? Surely, if Real has published since last year in a weekly magazine, then it would have taken less than fifteen months to gather enough material for a new volume.

The answer, unfortunately, lies in the fact that Real has not been serialized on a regular basis. That much can be gleaned from the fact that publishing two chapters back to back is part of Real volume 15’s “celebration”; still, it seems as Inoue isn’t going to abandon Tomomi and friends any time soon – there may still be hope for Hunter x Hunter yet.