The collaborations with Evangelion are non-stop recently. It seems like every other day, there is something new announced. This time, as a celebration of Bikkuriman Day on April 1st, which is an actual registered memorial day with the Japanese Memorial Bureau, Korean snack manufacturer LOTTE is collaborating with Khara on a limited-time exclusive Bikkuriman x Evangelion seal set. Earlier in the year, Japanese 7-11 locations had an exclusive series of Bikkuriman with Evangelion which sold like hotcakes and this collaboration is looking to be equally as impressive.

Whereas the previous campaign had individually packed Bikkuriman snacks with Evangelion seals featuring official character artwork from Studio Khara, this time it’s being handled a little differently. Not only do these new seals feature artwork from the official Bikkuriman design team at GREENHOUSE, fans who purchase more than ¥1000 of goods from the official LOTTE online shop, will be entered into a drawing where 41 people will be chosen across three months to win a specific prize. The contest will be running from today, April 1st until June 30th, with each month having a different prize.

The prize for the month of April features Super Zeus and Shinji Ikari, the prize for May features Herachrist and Eva Unit 01 and the June prize is a poster featuring all of the characters. 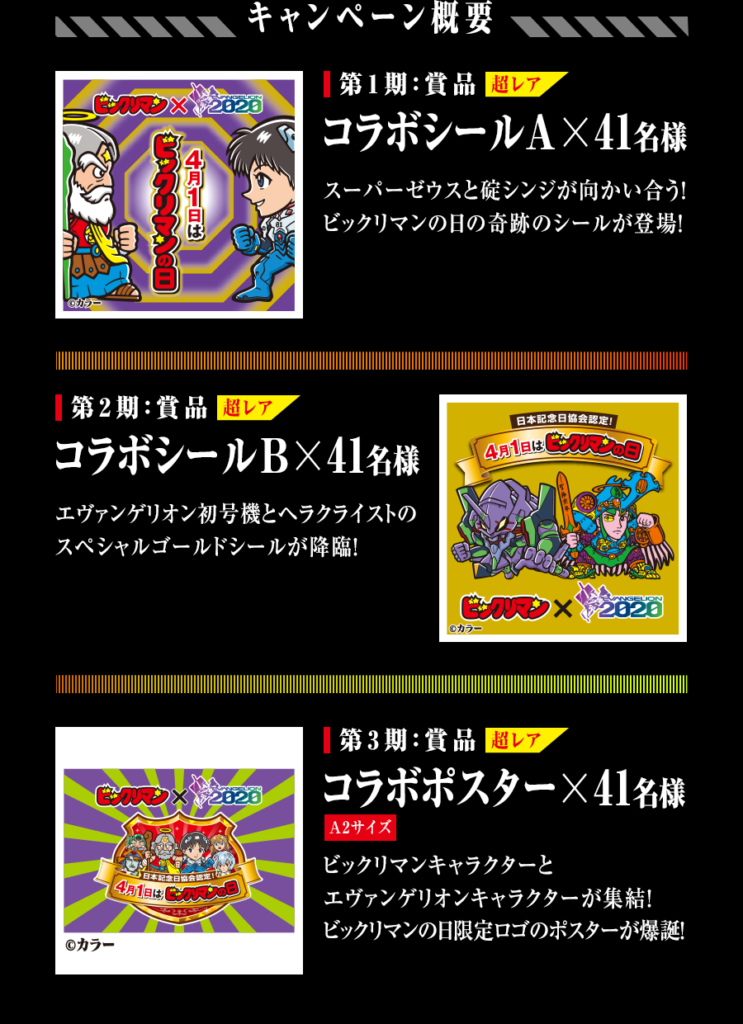 For those of you who aren’t familiar with Bikkuriman, they are a single package wafer cookie with chocolate & peanuts in the middle that comes packaged with a randomly selected seal (sticker). The series as we know it today got its start in 1985 with the introduction of the Devil vs Angels series, an ongoing collection of seals featuring whimsical creatures based on mythology with an interconnected story across each set. The mainline series is now up to #34, and a subseries called Bikkuriman Legend had its 11th entry released a couple of years ago with an official collaboration from Fragment Design. Many of the older seals, especially the more popular characters, can fetch a pretty penny (we’re talking upwards of $1000) on the second-hand market due to their rarity. The Bikkuriman franchise has a large fanbase in Japan, even going as far as spawning several anime & video game adaptations over the years. In addition to the original characters & stories that regularly get released, LOTTE often collaborates with popular franchises such as Dragon Ball, One Piece, Gundam, and even pop acts like AKB48 or Hatsune Miku. The seals have even spun off its own subculture of unofficial seals made by independent artists, and bootleg seals which are so rare that they fetch insane prices in the second-hand market as well.

For those of you who want to get in on this limited Bikkuriman Evangelion collaboration, you’ll need to try to find a proxy or a friend to order from the Japanese LOTTE store. Remember that you need to spend a minimum of ¥1000 ($10) and that only 41 people per month will be chosen as a winner each of the three months. The store is low in stock on Bikkuriman related items as of the publishing of this article, but a few sets are still available to scoop up if you’re interested in getting into this collecting hobby!