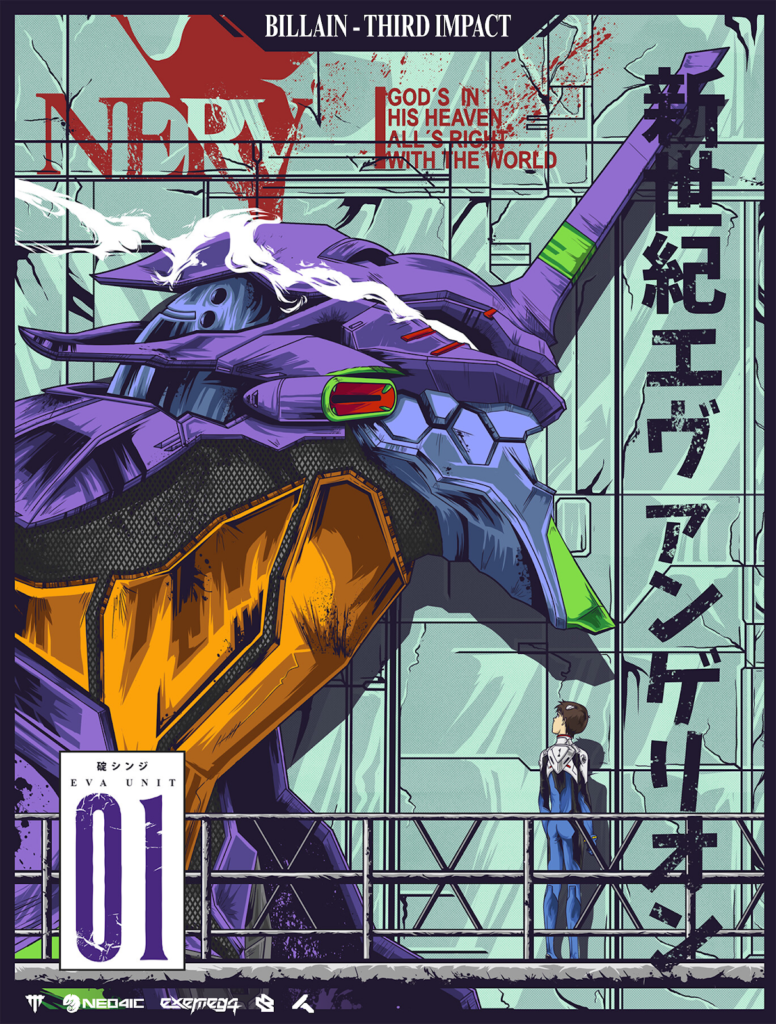 Sarajevo-based producer Billain has never hidden how much Japan has inspired him in his works. Whether it be with his tributes to Ghost In The Shell, Aethek 2501, or Akira, with ‘Tetsuo’s Revenge,’ his sound design efforts on Pacific Rim 2, or his work with 1000 Toys, the influence of Japan is always there. But now, EXEMEG4 and Billain are ready to pay their respects to one of the great classics of anime with Billain’s 9-minute tribute to Neon Genesis Evangelion titled ‘Third Impact.’ Without a doubt, this track is all about making an impact, with Billain’s signature neuro sound and haunting vocals by the late Eri Kawai, this definitely has some love behind it as the first ‘cyberneuro’ release by Billain. I could go into detail about what makes this ‘cyberneuro’ project work so well, but I think Billain can explain it better.

“Third Impact is my most ambitious attempt to reinvent/reconstruct and pay homage to the Evangelion story and transform it into a new media. It is a respectful tribute to the amazing world of Hideaki Anno and his amazing science fiction story. To try to be a more respectful tribute, I have utilized the late Eri Kawai’s acapella vocal of “Cruel Angel’s Thesis,” wrote music around her vocal, and the combination gave birth to an ever-morphing project inspired by the captivating world and realities of Evangelion.”

Check the track below.

Accompanying the tribute track is artwork provided by Jhony Caballero, and an AMV project that cuts together events of the show to sync with the music. From start to finish this video is firing on all cylinders, the production quality and usage of select scenes shows that Billain has done his homework and created a project that shows an utmost respect for Hideaki Anno’s genre-defining work.

A term that encapsulates this entire work is best described by Billain himself.

“Cyberneuro.
This is the next phase of Billain, the birth of the Cybrerneuro genre. Because it simply works. It does not have restrictions, covers more genres, connects audio and visual elements, and speaks in new ways, pushes the science fiction part of the brain, speaks to intelligence and sophistication, and encourages all younger experimentalists that there is a home for them.”

Within this Cyberneuro realm, it’ll be interesting to see what Billain pays homage to next.

About EXEMEG4:
From the same primordial ooze that all life climbs from comes Exemeg4 – Who seamlessly have entered into the creative audio space in 2020. Their goals are simple: To showcase the worlds’ relentless creators they feel have stepped away from today’s regularities, and to empower the rightful through creative collaboration and focused business strategy.