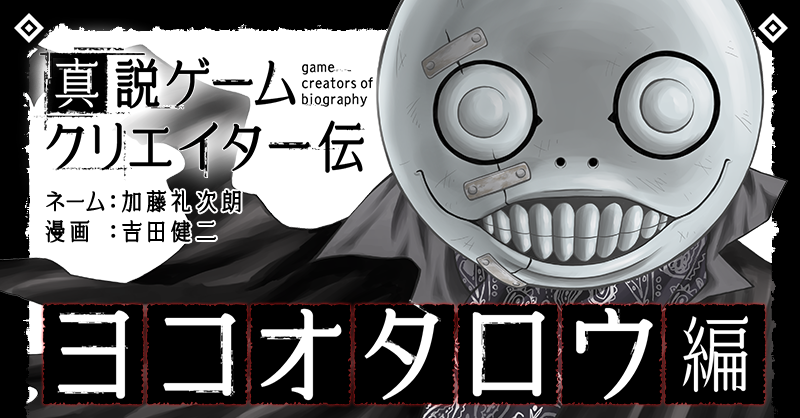 The secretive video game director Yoko Taro will be featured in an upcoming biographical manga story, which will begin on 21 February.

Reijiro Kato and Kenji Yoshida created Game Creators of Biography, aka The True Story of Game Creators (Shinsetsu Game Creator-den), which was first published online at Cycomics in 2019.

Their first story was a biography of video game artist Akihiko Yoshida. Among other things, Yoshida designed characters for Nier: Automata, which was directed by none other than Yoko Taro. So, there’s sort of a connection between the two stories. Incidentally, Akihiko Yoshida is also currently company director of CyDirection, a subsidiary of Cygames, which owns the Cycomics website and app.

Taro is famously known for not liking interviews. In his public appearances, he often wears a gray mask which bears a vague resemblance to Korosensei from Assassination Classroom. The promo for the Yoko Taro manga story would seem to respect that life decision, as it features Taro’s creepy smiling head. (I wonder if the head will speak in the manga? It’s not ‘real’ …)

Yoko Taro doesn’t seem to mind the manga, as the director quote re-tweeted Cycomics’ announcement on Twitter with the comment, ‘It seems that my life will become a manga.’

Taro directed Drakengard and Nier. He is also the creative director for Nier Re[in]carnation, which releases this week in Japan.

You can find Game Creators of Biography at the Cycomics (or Cycomi) website.