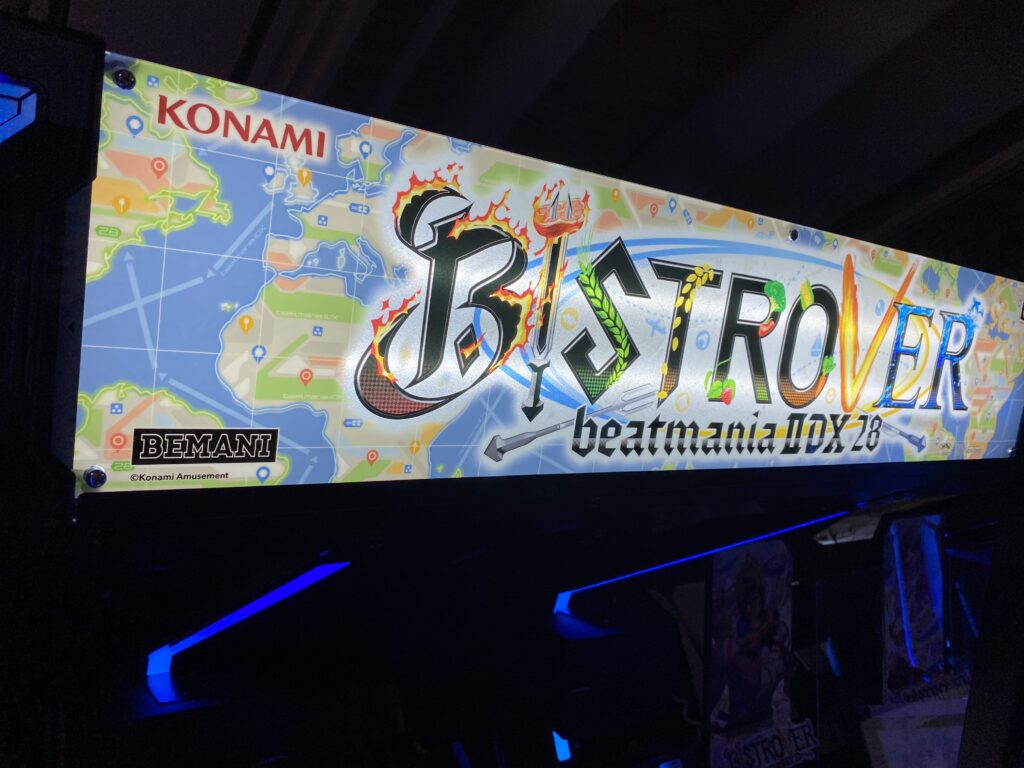 With beatmania IIDX 28 BISTROVER just 2 days away, Konami has shared two videos on YouTube overviewing some of the new songs that we’ll come to get familiar with in BISTROVER. The first video was uploaded to Konami’s official YouTube channel on Friday October 23rd and the second video was uploaded today. Needless to say, the songs that we’ll be playing in beatmania IIDX 28 BISTROVER seem to have a diversity that hasn’t been seen in a version of beatmania IIDX for quite some time which makes me very happy as a player. I have been playing beatmania IIDX since 3rd style on the PS2 and 4th Style in the arcades and have come to really appreciate some of the songs that have been in the game these past 20 years. 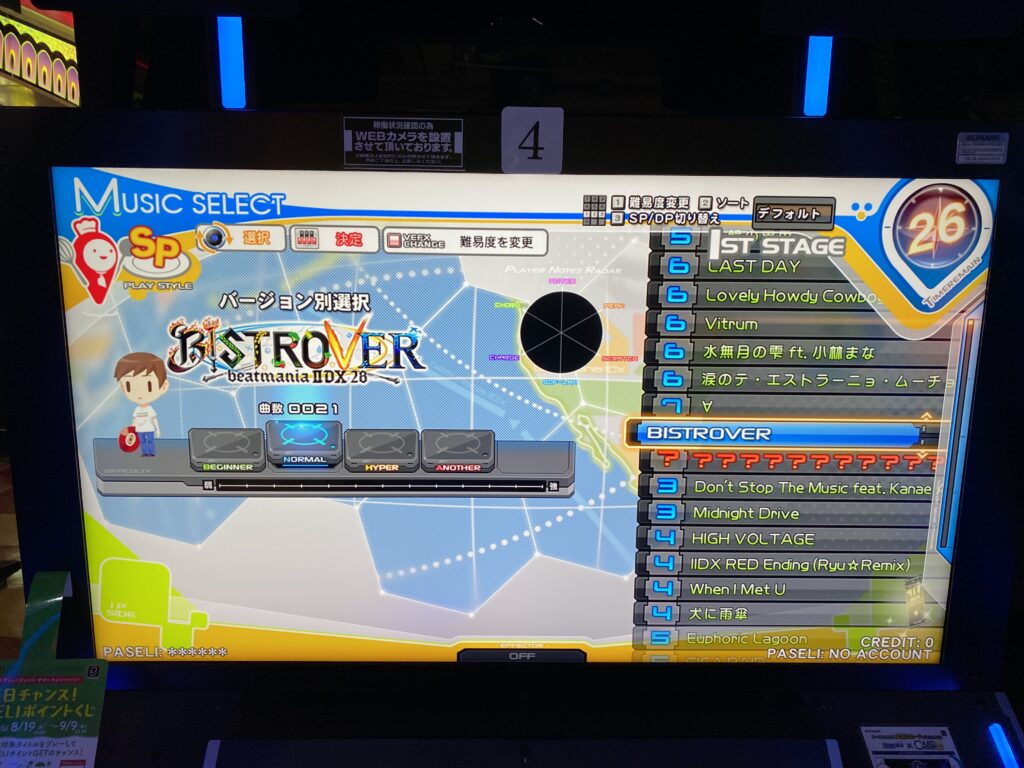 On Friday of last week, Konami uploaded the first BISTROVER crossfade video of some of the songs that we’ll be playing in beatmania IIDX 28 BISTROVER. So let’s take a look at what we have in store.

The video kicks off with the theme to beatmania IIDX 28 BISTROVER, which if you read my previous article about my impressions of the location test, I mentioned that the BISTROVER theme sounds very reminiscent to Camellia’s “Routing” song, definitely a good start.

Next, we’re given the opportunity to hear a clip of “∀” which is a remix of DJ Amuro’s “A”, “AA”, and Wac’s “Shonen A” being remixed by BEMANI Sound Team “HuΣer”. The song was one of my favorites from the location test and look forward to being able to play it more once the game hits on October 28th.

After this, we’re given another location test track which is “HIGH VOLTAGE” by Yuta Imai. Yuta Imai is a new-comer to beatmania IIDX with this being his first original track to the game. He previously had a crossover from Sound Voltex that was implanted into beatmania IIDX 27 HEROIC VERSE, but “HIGH VOLTAGE” is a brand new track which allows players to see what this new artist is all about.

After “HIGH VOLTAGE” we are presented with the first new track that wasn’t present in the location test which is “Breakin’ Rules” by BEMANI Sound Team “Sota Fujimori.” “Breakin’ Rules” is a very nice throwback to the traditional Sota Fujimori sound that we’ve come to love with the acid lines that sound like they’re coming straight from a 303.

After this, we have the second new song which wasn’t present in the location test “Minazuki no Shizuku feat. Kobayashi Mana” by Xceon. If you’ve heard any Xceon track in the past, you’re very aware of what you’re getting into here, very reminiscent of the “Hyper J-Pop” series from Pop’n Music and tracks like DoLL and EDEN from previous IIDX versions.

Next, we have what I feel is the biggest surprise of this crossfade video and that is “Overslept” by none other than PARKGOLF. PARKGOLF is a track maker from the Japanese underground scene and this track is really a good first track for him to be part of IIDX. It’s traditional drum’n bass sound complete with the traditional rave piano stabs make it one track that I think will certainly stand out with the player base once the game drops this Wednesday. It’s really been quite some time since we’ve had a song like this in IIDX.

Following “Overslept” we have the return of Dirty Androids with “Farewell to Marrakech” a track that deviates very far from what we normally would expect from Dirty Androids. The track has a very Latin inspired main lead with a drum track that seems to be on quite the swing. Definitely, a unique track to be on BISTROVER.

Next, we have a crossbreed style track from none other than Masayoshi Iimori. Masayoshi Iimori has been tearing up the club scene in Japan and shows no sign of slowing down with his new track in beatmania IIDX 28 BISTROVER “Ah Hah Yeah” complete with heavy-hitting gabber kicks and super distorted kicks as well. Not to mention the video for the track is downright amazing.

Following “Ah Hah Yeah” we have a new track from recent beatmania IIDX main stay Ajurika with the track “BIG SOMATAMU.” For a fun fact for those of you who don’t know “somatamu” is a Green Papaya salad that originated in Laos. “BIG SOMATAMU” is probably my favorite track of the first part of the crossfade video with it’s super heavy drum’n bass sound complete with super-compressed growls and wobbles.

Last but not least for Part One, we have “Mahou no Kakurenbo” from the musical genius “Snail’s House.” The song features the hybrid future bass sound you’d come to expect from Snail’s House complete with a super wicked piano line and some awesome synth arpeggios. This track is for sure going to be a fan favorite of not only the artist but of IIDX 28 BISTROVER as a whole.

Next up we have Part Two of the BISTROVER crossfade video which dropped today on October 26th. Let’s take a look at what this video has in store for us as well.

Part Two kicks off with a song that we got to hear not only at the location test but as a preview track in beatmania IIDX Ultimate Mobile. “Euphoric Lagoon” by BEMANI Sound Team “TAG” is one of the songs that I would have expected came from IIDX 18 Resort Anthem with it’s tropical and kind of retro sound. It certainly fits in the mosh-posh of BISTROVER.

Next on the list, we have “Para siempre” by 削除 feat. 削除. There have only been a couple of artists who have featured themselves, and now we can add Sakujyo to that list. The song is quite catchy with its heavy synth stabs separated by an arpeggiated scale.

Next is “Namida no Te Estranjo Mucho” by LA BAILARINA☆PRIM which for better or for worse sounds like every other PRIM song.

Oster Project is also back with a new track called “Inu ni Amegasa”. The track has a female vocalist by the name of Sorako who’s voice really fits the aesthetic of the track. The overall sound of this song really gives me some IIDX 8th Style vibes for some reason.

TORIENA is now in IIDX. This is one of the biggest surprises that came from this release. TORIENA is an absolutely amazing artist and I’m excited that she’s now in IIDX. Her song is called “Chewingood!!” and I don’t even know what genre I would be able to label the song as. It’s definitely one of the top songs so far with this release.

Next up we have “Lovely Howdy Cowboy!!” by Maron from IOSYS. The song is a typical denpa style song which means high pitched voices and super up-tempo music. Hopefully, the chart is as good as Kneesocks Princess from Lincle.

“POLꓘAMAИIA” is a song that I really liked from the location test. It starts out with some Russian / Czech style sounds and then goes directly into what we’d expect from Camellia. I see this one getting played a lot once the game gets released.

Finally, we have “Midnight Drive” by Rap Bito prod. uno. Uno is another alias of RoughSketch, which focuses on less hard sounding tracks. “Midnight Drive” is a full-on rap track which is something we haven’t seen in IIDX for quite some time. I’m very excited about this song.

So there you have it, the handful of songs that Konami introduced from beatmania IIDX 28 BISTROVER through two separate crossfade videos most of which were part of the location test. Beatmania IIDX 28 BISTROVER comes out on October 28th and you better believe that we will be at the game center at opening to get our impressions about the final build of the game and what other surprises might be hiding within the game.