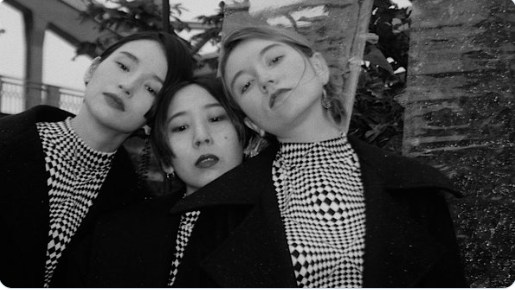 One of the better electronic numbers to pop up in Japan so far in 2019 has been millenium parade’s “Veil.” That uneasy cut by King Gnu member Daiki Tsuneta’s side project featured vocals courtesy of ermhoi, a member of a trio called Black Boboi. That unit has mostly existed in a fog far away from the mainstream, but her inclusion on the buzzed-about “Veil” sparked plenty of curiosity. Digging deeper reveals an extremely promising act.

The group consists of ermhoi, Julia Shortreed and Utena Kobayashi (the latter putting out some incredible music on her own over the last few years). Together, they’ve released a trickle of singles over the last year, leading to this January’s Agate. That set features a constant unease delivered via music using space as a way to raise tension, made all the more clear by subdued beats and the trio’s vocals. For all the moments of prettiness sprouting up, something sinister lurks in the dirt too.

Black Boboi’s latest release, a pair of songs, finds them building even more on this foundation. Listen below.

The standout goes to the first number, “Red Mind.” Black Boboi take steel drum percussion and warp it from tropical delight to shadowy force, letting the beat move alongside their own stretched-out vocals and eventual counter rhythms adding more intimidation to the number. “Red Mind” frequently morphs from there, keeping one engaged while maintaining the central hair-raised-on-neck feeling that makes it stand out. Second number “4hours” is a bit more traditional in how it aims to rattle listeners. It uses lots of room, rattling percussion and synthesizer to create a more haunted atmosphere. Effective and capped off by a great outri that amps up the drama, but “Red Mind” offers a more exciting move forward for the trio.

Expect to hear more from the group later this summer, and if you happen to find yourself at the Fuji Rock Festival this July in Naeba, Niigata Prefecture, catch them on Sunday.