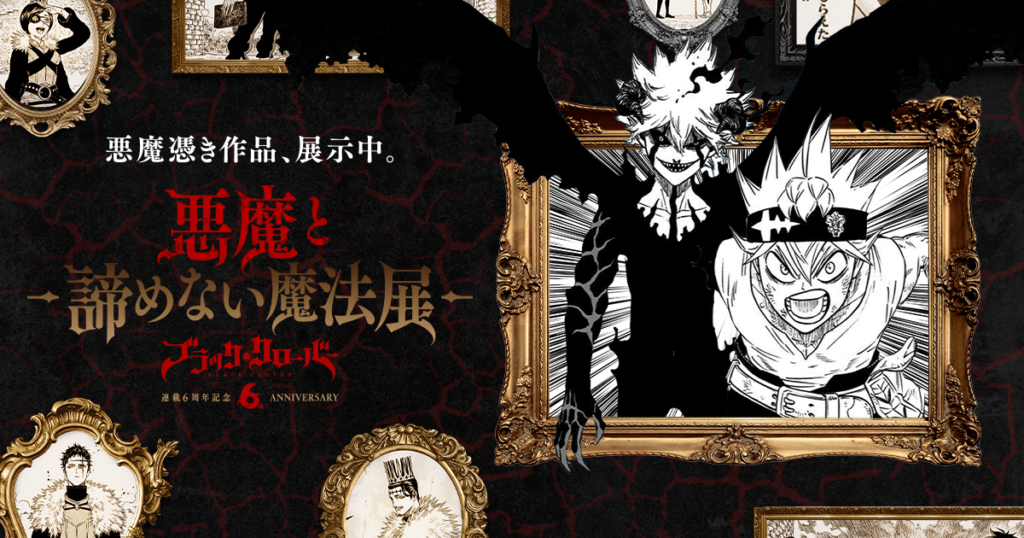 Black Clover is reviving the online ‘Akiramenai Mahou’ exhibition for its sixth anniversary, adding content to reflect some of the latest story developments. Covering this requires discussing a fairly large amount of spoilers, so consider not reading ahead unless you’re fully caught up with either the anime or the manga.

The ‘Akiramenai Mahou’ exhibition was originally held last year to mark Black Clover’s fifth anniversary, referencing in its title protagonist Asta’s iconic catchphrase ‘Not giving up is my magic!’ Shueisha have since brought it back for this year’s sixth anniversary, but with a twist: the devilish Dark Triad behind the Spade Kingdom are the focus here. New content has been added about them and their backstories, but the original is also still available to access.

Entering the ‘Akiramenai Mahou’ exhibition requires accessing the special website via mobile, which is a bit of a pain. Nevertheless, this is because the interface requires touch, and what’s there is worth the effort: although this is ostensibly an ‘exhibition,’ Yuuki Tabata’s original art from the Black Clover manga has been brought to life through animated videos. It’s more like watching a series of really awesome AMVs, to be honest.

Four new sections have been added to the ‘Akiramenai Mahou’ exhibition to reflect Black Story’s latest story developments, including one focused on Zenon and his devil (as of yet unknown); Dante and Lucifero; Vanica and Megicula; and Asta and Liebe. This compliments the five sections that were created for the fifth anniversary, recapping the story up until that point.

Holding an online exhibition is one thing, but updating it to reflect the latest story developments? That’s actually pretty cool, and should serve to entertain Black Clover fans, both new and old. Just don’t click on the stuff about the devils unless you’re up to date, because there’s some major spoilers in there… I learned the hard way!

You can read Black Clover for free via VIZ Media.