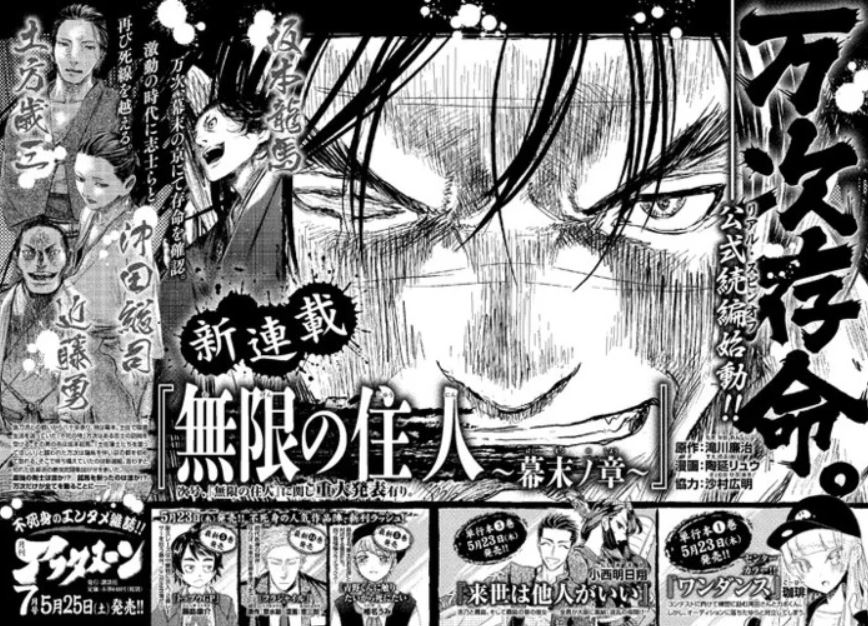 Hiroaki Samura’s classic samurai manga Blade Of The Immortal is getting a sequel series that will launch in the May 25 issue of Kodansha’s Monthly Afternoon. The sequel comic is simply titled Blade Of The Immortal – Bakumatsu Arc and as the title suggests the new story will take place in the Bakumatsu era of Japan, which marked the end of the Edo period. While Samura’s credited with story creation and input, the manga will be illustrated Ryu Suenobu and written by Kenji Takigawa. Thankfully the art looks similar enough to Samura’s, but this may discourage some longtime fans Some preview pages are currently available on Mantan.

The original Blade Of The Immortal launched in 1994 and wrapped up in 2013. Critically acclaimed from the start, the manga won an award at the 1st ever Japanese Media Arts Festival Awards as well as an American based Eisner Award; One of the highest honors a comic can achieve. Years later, a TV adaption aired in 2008. In 2017 the eclectic and prolific Takashi Miike, most famous for Ichi The Killer but has done adaptions of Terraformars, Yatterman, and Jojo Part 4, directed a live-action Blade Of The Immortal. Needless to say, the franchise carries a lot of weight so a sequel manga isn’t super surprising.

Blade Of The Immortal follows an immortal samurai named Manji who’s been cursed with immortal. Living what one may call a chaotic neutral life, he sets out on an adventure to kill one evil man for every good one he’s slain to become mortal once again. The manga often depicted him battling real-life historical samurai figures and will continue to do so in Blade Of The Immortal – Bakumatsu Arc. Yesterday, I touched upon how so many sequels and spin-offs are coming out in manga now. Is there really a need to continue a beloved story especially when its original author isn’t heavily involved? It’s hard to imagine this living up to its original counterpart, but I look forward to being pleasantly surprised.

Blade Of The Immortal – Bakumatsu Arc will premiere at the end of next month in Kodansha Monthly Afternoon. Dark Horse Comics has recently re-released the original manga in omnibus editions.