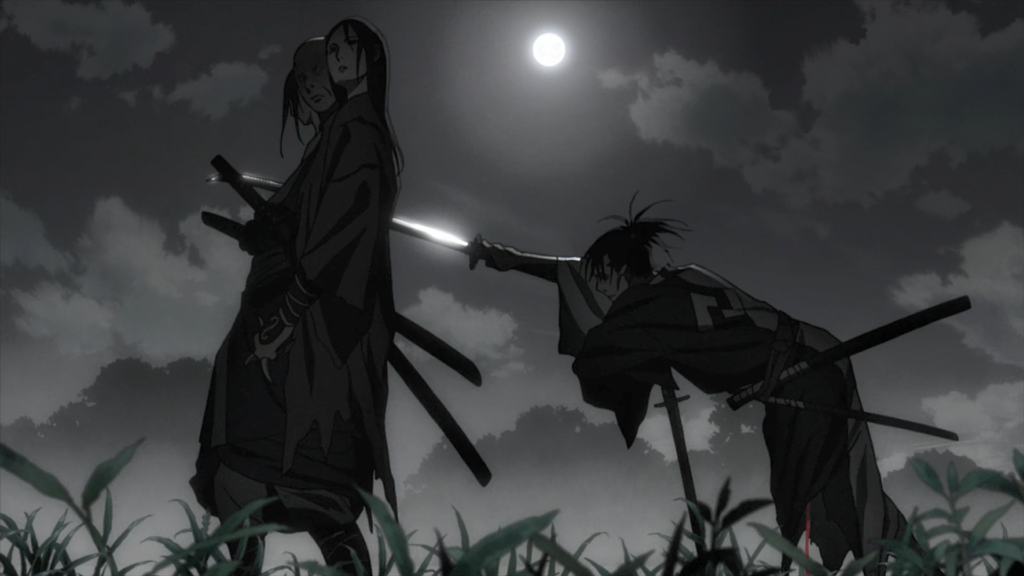 One of the anime I had been most excited for this fall season was the new adaptation of Blade Of The Immortal. The show’s based an iconic Eisner award-winning manga by Hiroaki Samurai that previously had a thirteen-episode series created in 2008. Unfortunately, the show didn’t generate much enthusiasm and it never got more than it’s initial run which got nowhere close to covering the manga’s 30 volume run. Sixth months ago a sequel manga series had been announced and shortly after that a brand spanking new Amazon Prime exclusive adaptation that promised to cover the entire manga was unveiled; Some production committee powers at be decided to give the franchise a new push and while it’s hard to say why, we’re excited they did. Now that it’s October and the first couple episodes are out we gotta say so far, so good!

Let’s give a general recap of what the series is! We won’t spoil any big plot points but this is more a summary of the general plot opposed to these two episodes alone. After all, the manga’s nearly 30 years old and is renowned enough to have won an American Eisner which are the comic book equivalent of the Oscars. Blade Of The Immortal follows one Manji, a talented samurai who’s on a quest to rid himself of the immortality he’s been cursed with. At the beginning of the series, he meets Rin Asano. A young woman who’s family has been brutally murdered by the Anotsu who was to inherit her father’s sword instruction dojo. He saves her ass and she hires him as a body-guard as they start journeying together to accomplishment their goals.

One benefit of being a streaming service worldwide exclusive is that the show doesn’t have to meet any TV broadcast restrictions. It could be as gory and off-center as it likes and, as long as it keeps people interested, the show’s creators can do exactly as they like. The 2019 Prime-exclusive Blade Of The Immortal takes full advantage of that. I don’t mean to imply that show enters any gore-porn or shock-value territory but there’s plenty of blood splatter, separated limbs, and general gruesomeness to go around. Admittedly, this show’s not for the faint of heart but those who don’t mind a little or a lot of violence have reason to check this out. 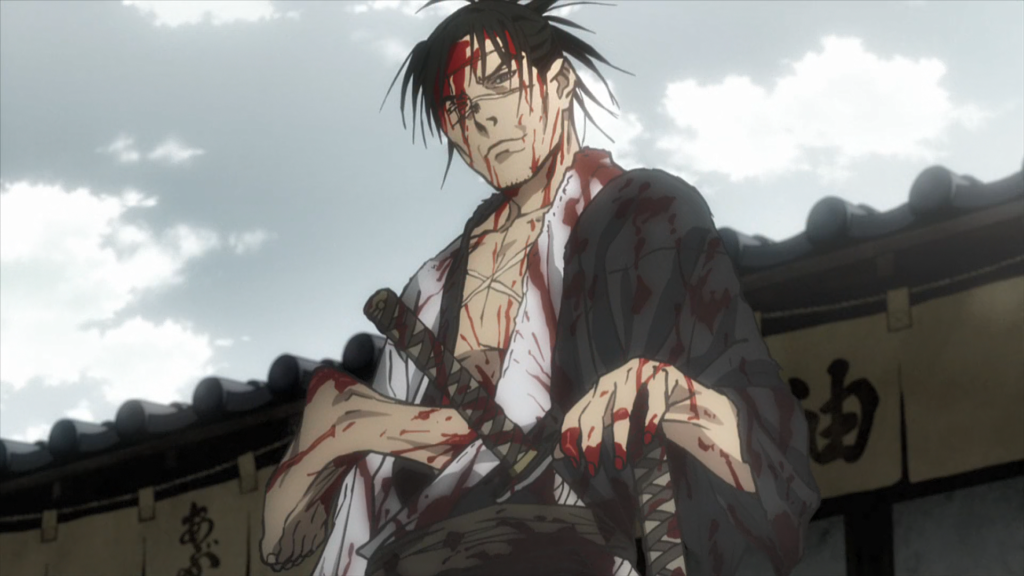 Thankfully, the show doesn’t exist just an excuse to animate one excessively bloody samurai battle after another. The extreme measures and depictions this anime showcases truly are in service to a greater whole. In between the fights, the show’s actually a bleak, atmospheric, and slow burn. For lack of a better phrase, it’s apparent in the first couple episodes alone that there’s a lot of ‘direction’ in the show. Muted colors (crimson red aside), cloudy skies, and an intentional oppressive monotony, the entire vibe of the show is extremely intentional. After all, our lead character Manji is immortal after all and maybe that’s just what life looks like when it goes on and on and on.

The contrast between this bleak world and these forays into hyper-violence is rather stunning. I’m going to make a bad, hack comparison that I’ll hate myself for but it’s in some ways… like Dark Souls. You have a desolate setting where life’s more miserable qualities have exploding onto the surface and yet just to nail in that ‘yeah, it could be worse’ you have enemies who are grafting the heads of their victims onto their bodies for hyucks and giggles. It’s all played seriously enough that you’re drawn into the horror yet it doesn’t come off as so rigid that you feel like you’re being bludgeoned over the head with something too up its ass for its own good. 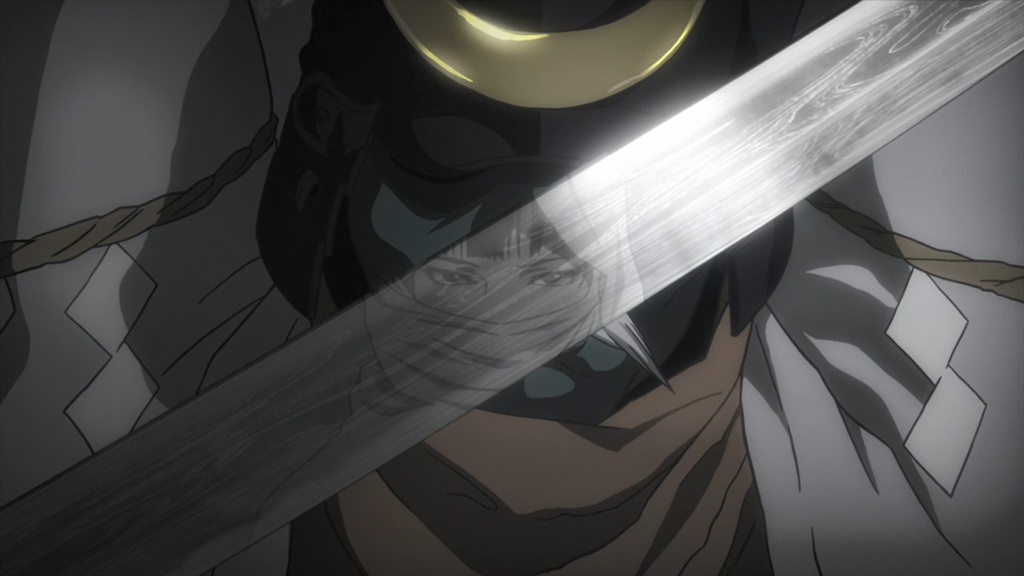 Hiroaki Samura’s original Blade Of The Immortal comic isn’t a legacy manga for nothing, and I think the animation team over at Liden Films has strived to accurately portray not just the action but the feeling of the manga. It looks great in terms of both the animation quality itself and how the whole thing’s illustrated, lots of unique composition and intensity to the art. The director Hiroshi Hamazaki also did the headed the animated version of Shigurui: The Death Frenzy which is another excellent Samurai comic with incredible nuance that its anime successful recreates. Going by that and these first few episodes here, the production committee made the right decision with their director this time around. For the record, he also directed the anime for the original Steins;Gate which to this day still has more than its fair share of fans.

Another thing to note, this is the second Samurai anime based off an older manga to hit Amazon Prime exclusively this year. I’d be remiss if I didn’t mention the excellent Dororo which aired on the streaming service earlier this year. While that’s another must watch, I’d say subject material aside these shows have enough to set them apart that I don’t just feel one is riding on the other’s coat tails. Dororo similarly depicted a world with visible misfortune and some of its battles got gnarly, but there’s a lot of charm and warmth within the characters. Here? Well, I’m sure at some point through the show’s run it’ll have some upbeat moments but this anime really asks you to savor the misery and accept its unfair life or death world.

We’re only a few episodes in so far but I think we may have something special on our hands with Blade Of The Immortal. If you’re just looking for a cool, slick action show this isn’t it; Or rather it is in bite-sized portions. You really have to savor the melancholic world and dry tone of the show if you want to get something out of it. It demands your attention but does a pretty good job of getting it. As the final anime season of the decade starts, I’m glad we at least have one real deal show to ride it out with.

You can watch Blade Of The Immortal on Amazon Prime now.