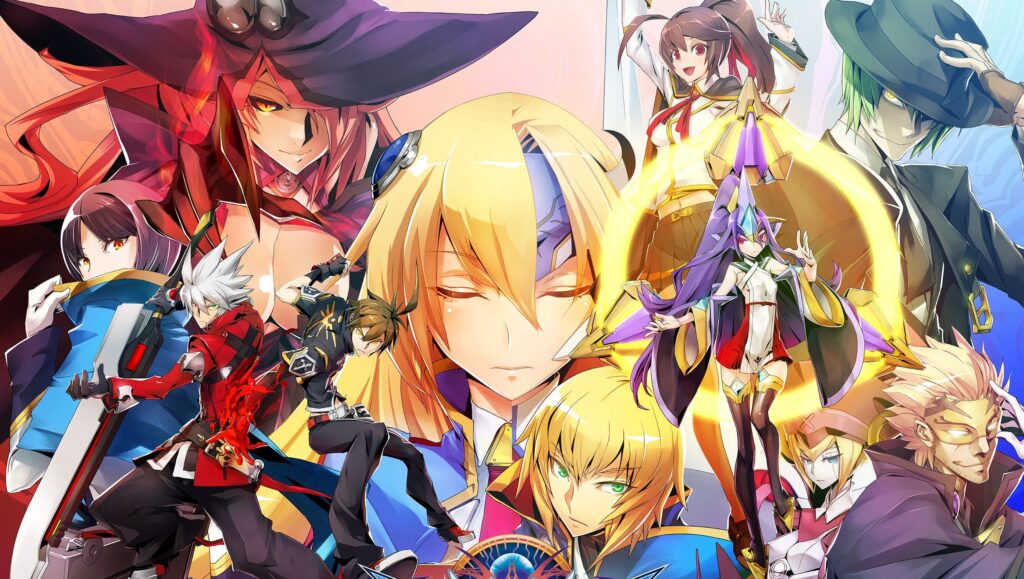 I still remember the day: one seemingly like any other during a hot summer of 2009. With boredom at home and the money our parents had given us burning in our pockets, my friends and I decided to walk over to the local Golfland Arcade (a ritual that’d become more common in the years to come thanks to a wonderful selection of arcade cabinets on the west coast of North America).

Even with the latest selection of Street Fighter and Tekken arcade cabinets and the availability of older classics such as Marvel vs Capcom 2, nothing quite looked like the machine in the corner that boasted anime-like characters and beautiful backgrounds that were just as fun to stare at as the fights themselves… BlazBlue: Calamity Trigger.

The 2D fighting game was the newest title from Arc Systems Works, a studio with a lot of work under their belt but most known for their Guilty Gear series of fighting games. After the studio lost the rights to the Guilty Gear IP (but eventually retained them in 2011 and went on to make Guilty Gear Xrd in 2014) they sought to create a spiritual successor. This would come to be BlazBlue: Calamity Trigger.

Eleven years later and the series has four main entries, an anime adaptation, visual novel prequels, light novels, and a crossover fighting game in-between seven different franchises. Needless to say, it’s pretty popular and at the time we had no idea how much this 2D fighter would amount to.

The Main Games up to Central Fiction

BlazBlue stands out from many fighting games just for featuring a strong narrative. You can certainly enjoy the gameplay of each entry on their own, but it’s possible you might be lost in the story by jumping directly into the latest entry. To provide a better understanding and advice on how to approach the series, the list of games in the main BlazBlue series are as follows:

If you’re interested in the story, there’s always the option of playing through the story mode for each game. It’s certainly the best way to understand character motivations and see the multiple endings for each character’s story. The obvious drawback to this is having to play through the stories of the growing roster of characters across four games that each add on and tweak their gameplay mechanics. 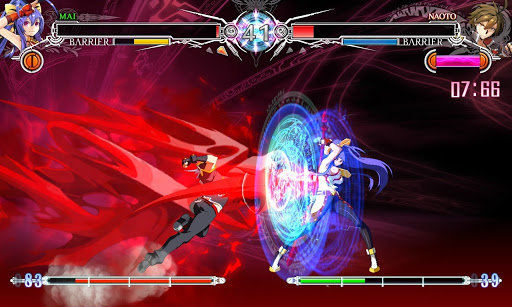 My personal advice is to start with Chrono Phantasma Extend, play through the recaps and history lessons within, and then move on to Central Fiction. You’ll have a decent understanding of the events that occurred, and the gameplay between the last two entries is easier to jump between. 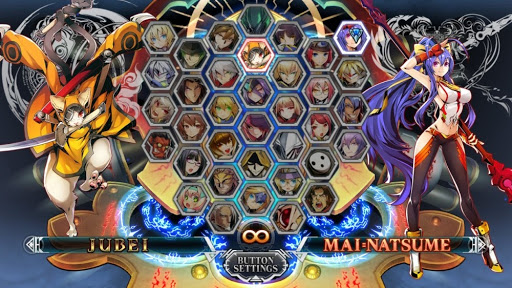 There are a lot of characters in the BlazBlue universe. Central Fiction has compiled 35 total (after DLC characters) and sorry, but I’m not going to go over all of them. I will go over some of the most prominent ones, though!

Ragna the Bloodedge: The male protagonist of the series. We’re introduced to him as a wanted criminal known as the ‘Grim Reaper’, who apparently has the largest bounty of all time placed on him. He uses the Azure Grimoire (alternately called Blazblue). He’s the brother of Jin Kisaragi. 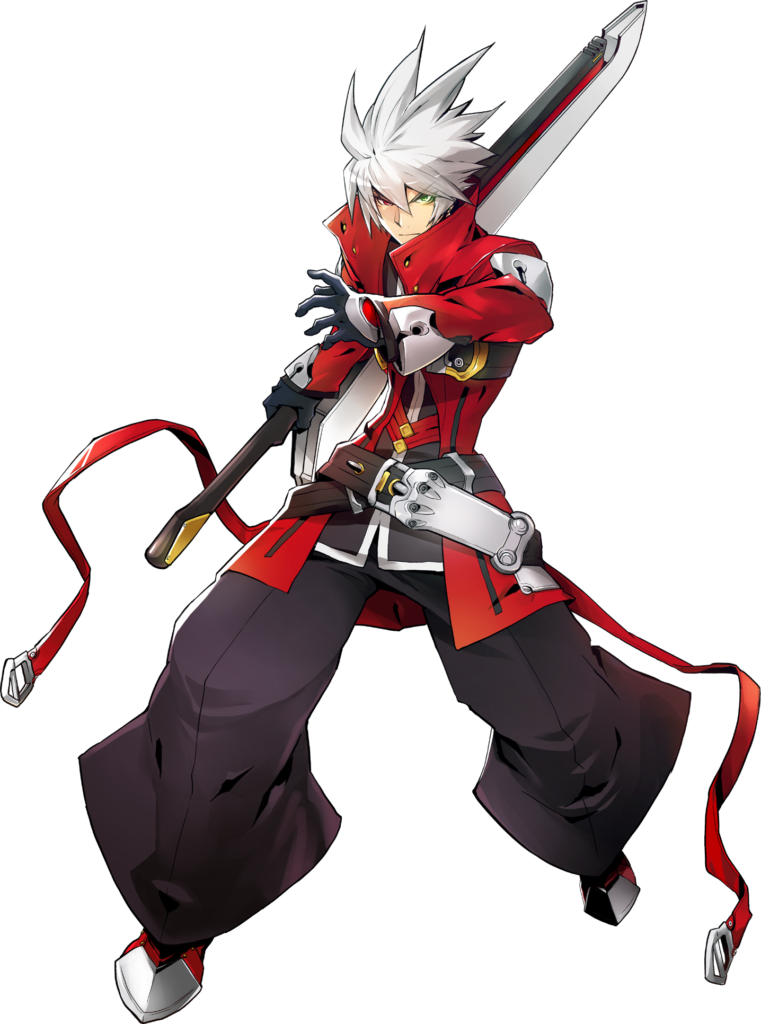 Noel Vermilion: The main heroine and a lieutenant within the NOL. With her commanding officer’s sudden disappearance, she’s sent out to find him. Her weapon is the Demon Guns: Bolverk. 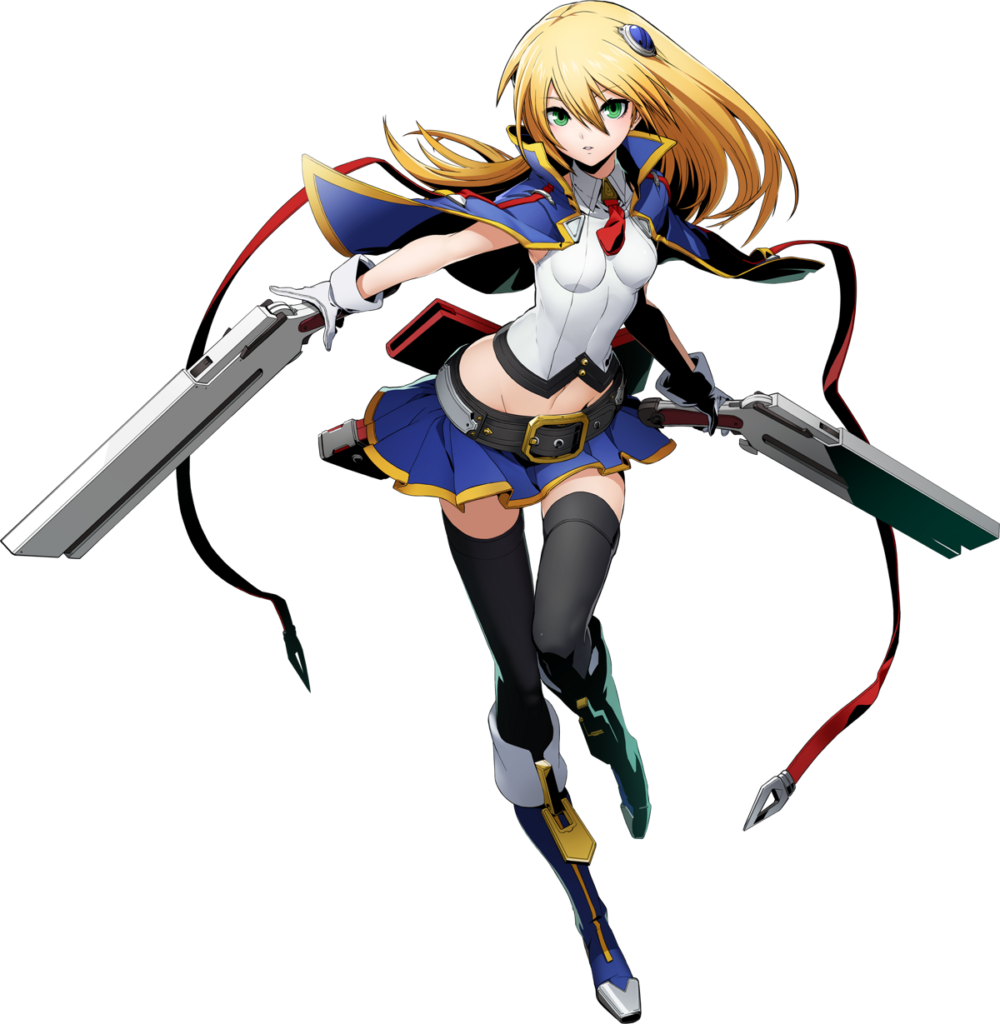 Jin Kisaragi: A recently departed major in the NOL and the commanding officer of Noel. He’s famous for heroic actions in the Ikaruga War. Emotionally unstable and seemingly insane, he’s left his post to search for his estranged brother Ragna. He uses the Ice Sword: Yukianesa. 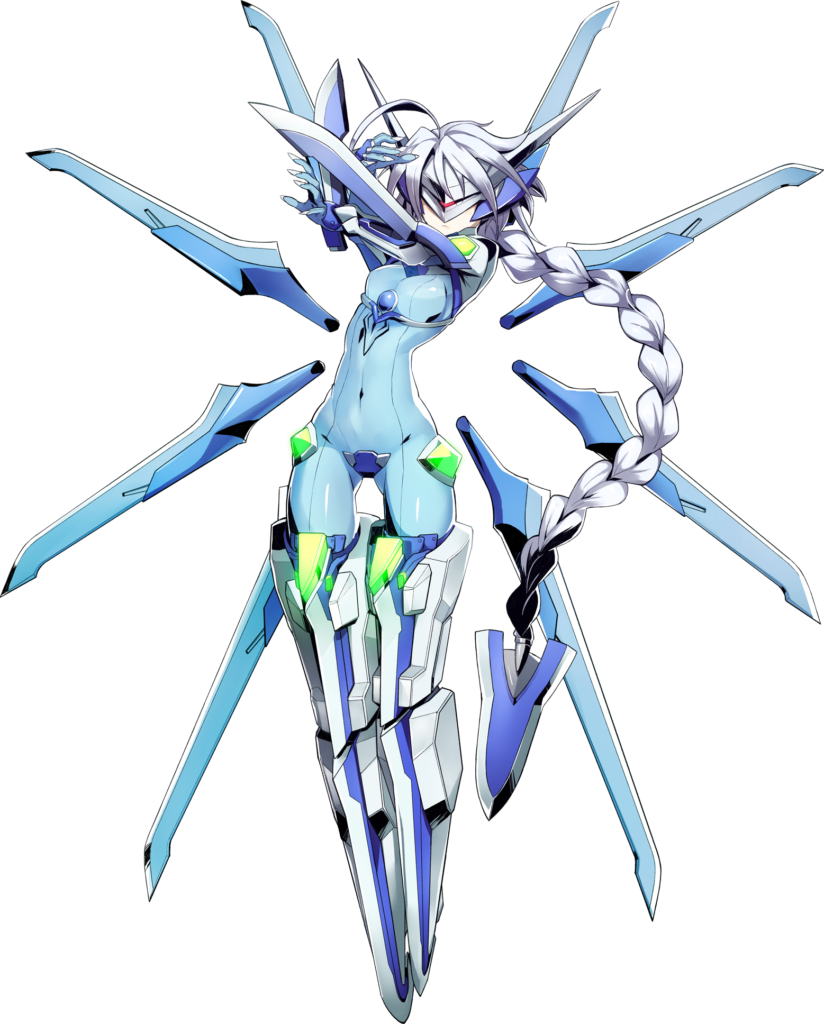 Hazama: An NPC in Calamity Trigger and a playable character from Continuum Shift on, he’s typically seen with his signature creepy smile. He’s revealed to be the main antagonist of the later title. His weapon is the Snake Pair: Ouroboros. 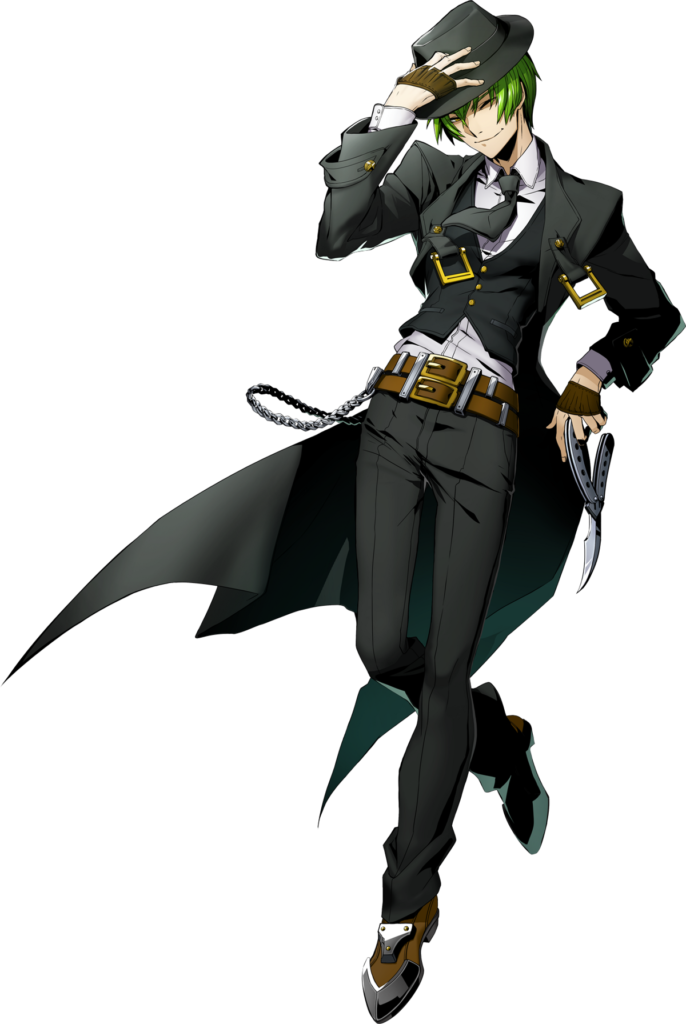 Rachel Alucard: The current head of the Alucard family. If the name isn’t enough to give it up, one of her defining characteristics is that she is a vampire. She watches over many characters and the events of the series, but is particularly tied to Ragna. 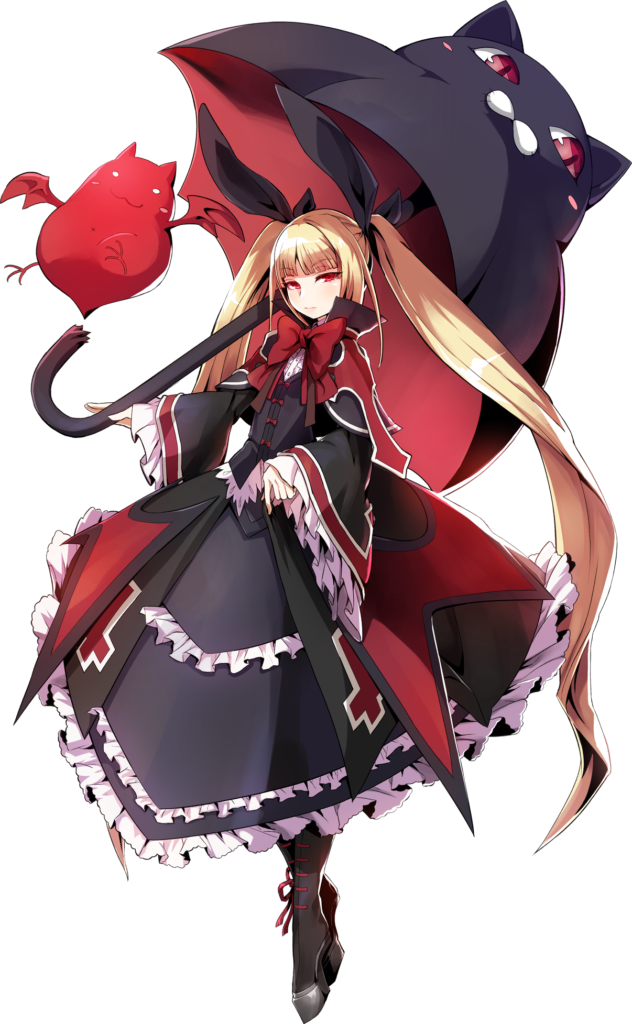 Hakumen: One of the legendary Six Heroes who fought against the Black Beast. He seems to have an intertwining fate with Ragna. His weapon is the Slaying Demon: Okami. 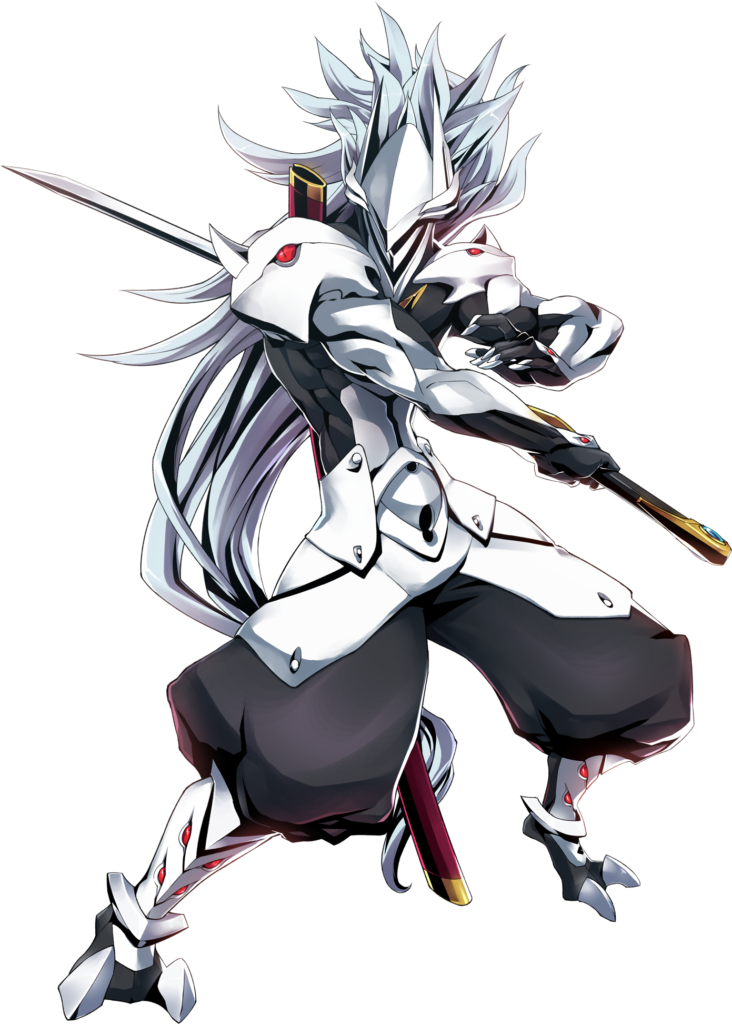 The series has expanded into various different works. Many of these spin-offs are entirely separate from the main story, so there isn’t a necessity to play or read through them (although the protagonists from the light novel and manga spinoff do appear in Central Fiction).

I’m not going to go over every single spin-off, but instead the two that newcomers will likely run into.

First is the anime adaptation BlazBlue: Alter Memory, which serves as a retelling of the first two entries of the series. It attempts to cram a lot into twelve episodes and fails to explain important plot details and lore which leaves you with more questions than answers. The animation leaves a lot to be desired as well, which is why my personal recommendation is to avoid it entirely. 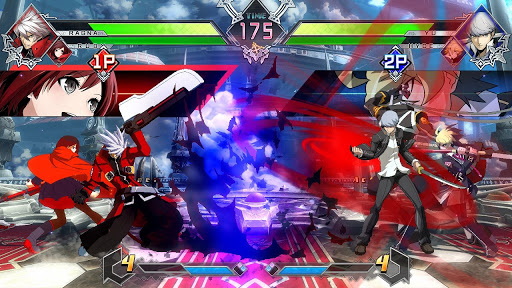 On the other hand, Blazblue: Cross Tag Battle is absolutely worth a look into! Initially announced at EVO 2017, the crossover fighter pits teams of two against each other from the BlazBlue, Persona 4 Arena, and Under Night In-Birth fighting game series, as well as the popular American CG show RWBY.

It has since been updated with characters from the Arcana Heart, Senran Kagura, and Akatsuki Blitzkampf series. The gameplay is simpler than other BlazBlue games, but the response to it (bar the heavy criticism it received for its initial DLC practices) has been positive.

While the director of the BlazBlue series said that Ragna’s story ends with Central Fiction, he also pointed out that this doesn’t mean the series itself is over. With the team currently working on Guilty Gear: Strive, it’s possible their next project could be BlazBlue related. No matter how the series proceeds, you can be sure there’ll be more BlazBlue to come.

Make Sure to Catch the ‘BlazBlue: Cross Tag Battle’ Beta This Weekend