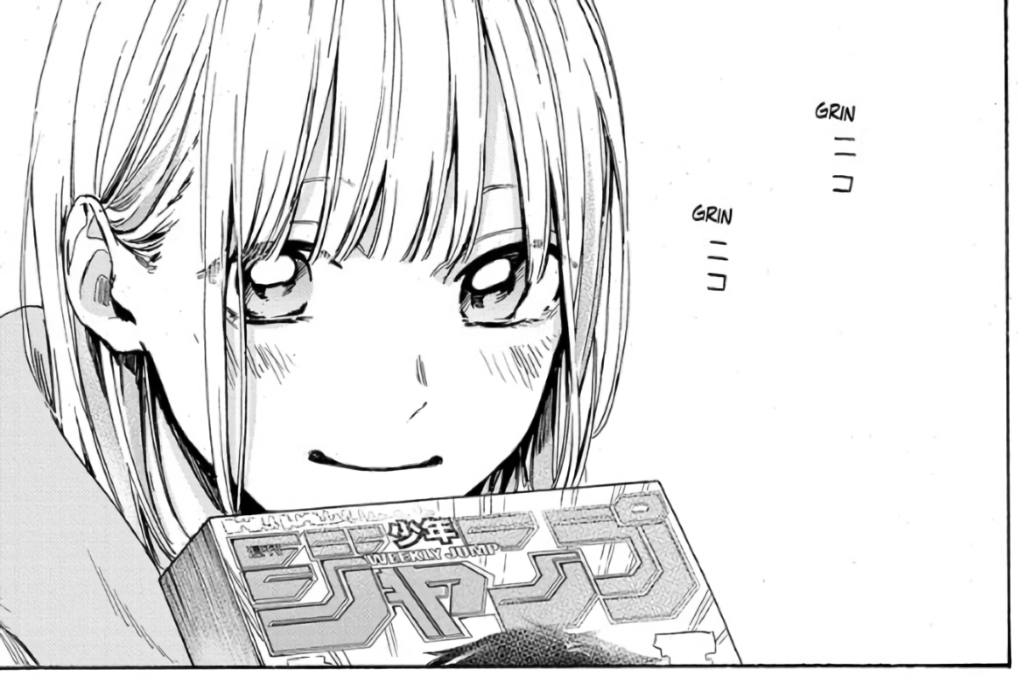 The beginning of a new week can only mean one thing: time for new Weekly Shonen Jump! This is where Jacob investigates the latest and greatest in the magazine, telling you what’s worth your time and what’s not. You can find coverage of other series under the tag Jump Time. Here’s Blue Box chapter 2.

I’ll be honest and say that chapter 1 of this series didn’t rock my world. Another love comedy where the two protagonists end up living together? Hmm, yeah, I think I got my fill of that with The Cuckoo’s Fiancee and I didn’t like that. Even so, I did say that I was willing to be convinced otherwise, and Blue Box chapter 2 does make some steps towards doing that.

Simply put, Blue Box chapter 2 has two aims: one, to set up protagonist Taiki Inomata’s goal of making it to badminton nationals, and two, to make you (the reader) fall in love with his love interest, Chinatsu Kano. Whether that second goal succeeds will be in the eye of the beholder, but the former has very interesting implications for the Jump line-up.

To start off with the first aim, when chapter 1 first launched, we didn’t know just how integral the sports element of the series was going to be. Was the two characters playing for two different teams simply a plot vehicle for getting them to meet and fall in love? Was this going to be more of a love comedy with a sports element, or a sports manga with a love comedy element? Blue Box chapter 2 pretty much definitely says the latter, because Taiki’s goal of making it to nationals is going to require one hell of a lot of work.

With any luck, this might take some of the pressure off of Nine Dragons’ Ball Parade as the sole straight sports manga in the roster, as well as High School Family, which has quite a strong sports storyline (when it’s not promoting weird fetishes). That much was already said last week, so we should talk about the idea of getting the reader to fall in love with Chinatsu.

How does series author Kouji Miura do this? Well, just like all the best love comedies out there, by depicting Chinatsu in the cutest and most attractive way. This ultimately requires a strong grasp of composition and character design, both of which Miura luckily has: even the opening color page for this chapter should be enough to make your heart skip a beat. There’s also multiple other moments in Blue Box chapter 2 where Chinatsu’s cuteness is on full display, such as when she takes Taiki’s issue of Jump. That’s sure to strike at the heart of most readers.

Am I a weak-hearted man for falling for such overt overtures? Probably, but at least Blue Box chapter 2 left me feeling more positive about the series’ future than the first one. If Chinatsu can keep being cute and Miura can put together a decent sports storyline, then… maybe things aren’t so bad, after all.

You can read Blue Box chapter 2 for free via VIZ Media.