Bobobo-bo-bo-bobo is a gag comedy manga series that was originally published on March 5, 2001 in Weekly Shonen Jump and ended on November 14th, 2005. It was adapted to animation on November 8, 2003 by Toei Animation, running a total of 76 episodes, and ran until October 29, 2005. It’s a relatively short manga, coming out to only 7 volumes.

Bobobo-bo-bo-bobo is the perfect series to watch if you don’t want to think too hard, and resign yourself to laughing at crazy random occurrences, or enjoy tons of gags and references to other series. Fans of the usual tsukkomi/boke dynamic from manzai standup will also enjoy this, as well as a dominant sense of confusion.

Bobobo-bo-bo-bobo opens with probably the most nonsensical plot – in the year 300X, a tyrant by the name of Baldy Bald the 4th tries to expand his Chrome Dome Empire (yes, that’s the actual name) by ambushing villages and bystanders and shaving their heads and decimating entire villages.

Our hero, Bobobo-bo-bo-bobo (Bo-bobo for short, but DON’T call him Bo) stands stalwart in the path of the regime, boldly rebelling with his Fist of the Nose Hair in his quest to see justice for all.

As you can see, it takes common story and anime tropes and turns them upside down for the sake of humor. There’s a sense of never knowing how the show will turn out, as it’s constantly throwing new surprises, visual gags, and references at you.

And speaking of references, this is a show that has no shortage of them.

It can be hard to say exactly what characterization Bobobo-bo-bo-bobo has, as his and many other character’s actions and personality traits are largely dependent on what the plot demands.

This, of course, is custom for such a gag-heavy series that is reliant on references to other shows, such as Fist of the North Star, Shaman King, and famously, DragonBall Z.

The show is also heavily reliant on breaking the 4th wall with commentary on the plot, characters, or life at large. He has a strong sense of justice, which is the driving force behind why he rebels against the Chrome Dome Empire.

We also see in a flashback episode that his hair-related abilities started very young. Around the age of 7, he discovered he had the ability to ‘hear the voices of everybody’s hair.’

The series’ self-awareness and humor show when he asks his own hair why he can hear it, to which his hair replies, “How should I know, you freak!” Needless to say, this does not inspire confidence in young Bobo. Even finding someone else who has the same ability doesn’t help, as he also calls him a freak.

Bobobo-bo-bo-bobo is a strange character, and that’s putting it very very lightly. 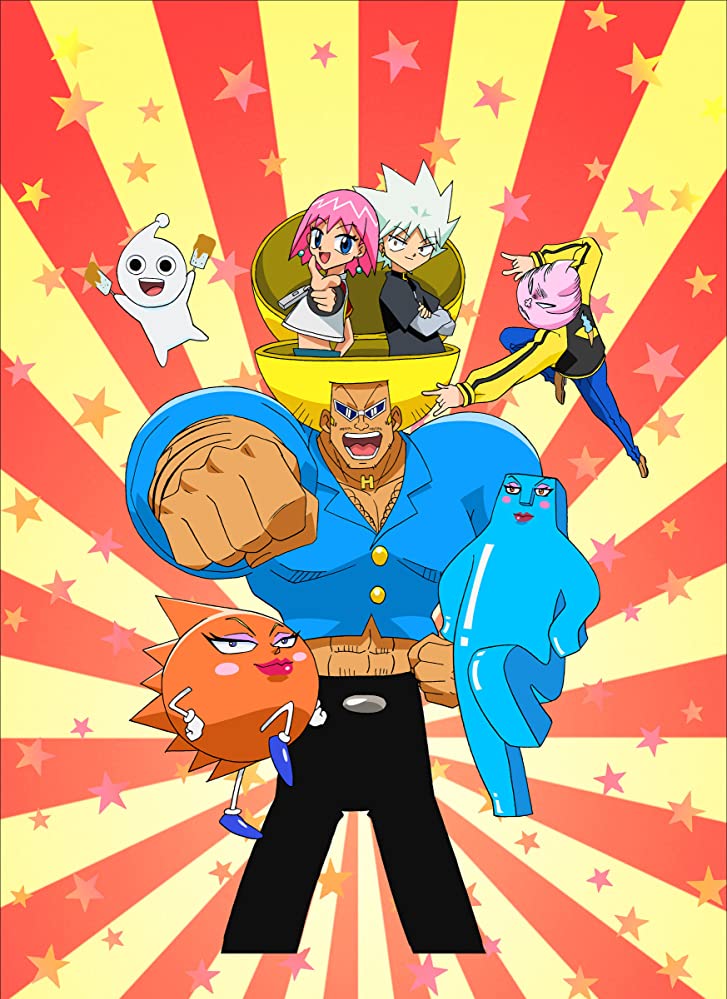 His odd, tanned, sunglasses-wearing, body-builder appearance and blond perfect spherical ‘fro aside, he’s known to possess the fabled Fist of the Nose Hair (or Snot Fo-You), an obvious reference to Fist of the North Star, in which his nose hairs emerge as long black tendrils he uses in combat.

His very appearance, as well as his speech patterns, seem to clearly be meant to evoke the image of the Blaxploitation films of the 70s. The second anime opening has a visual and musical style that reflects the musical style of the 70s in a nod to this.

Bobobo-bo-bo-bobo is far from the strangest character, and as like attracts like, he soon surrounds himself with similarly strange characters with similar abilities:

Due to the nature of the show, there are tons of characters, many of them one-note and one-shot, though some certainly recur. Even the inside of Bo-bobo’s body is not safe from invaders.