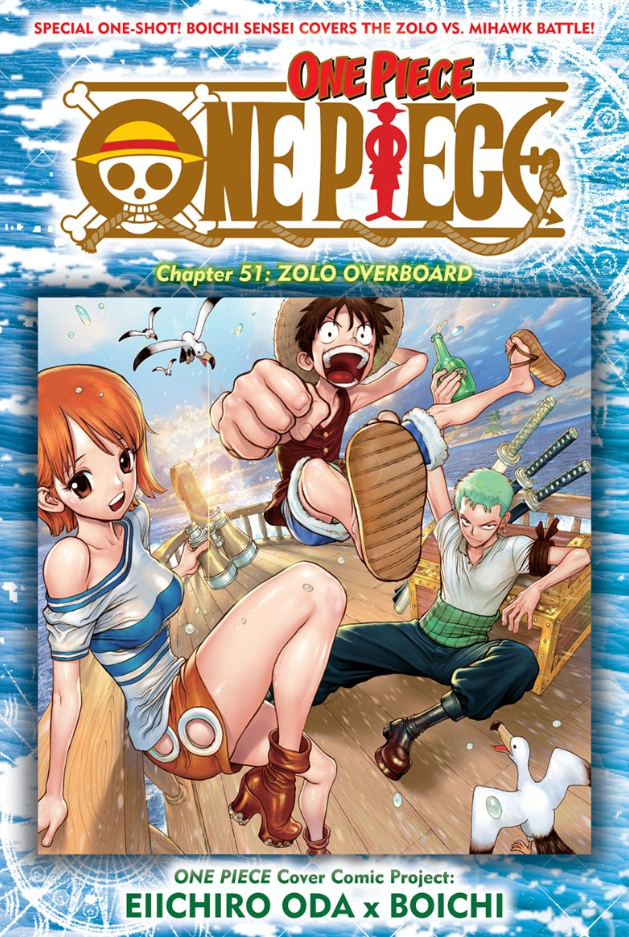 What a pleasant surprise! It turns out that Boichi’s Zoro one-shot wasn’t to be so singular after all, as it was revealed in this week’s issue no. 34 of Weekly Shonen Jump that Boichi will be kicking off the One Piece “cover comics project,” where different mangaka will be invited to present their take on Eiichiro Oda’s seminal shonen series.

Much like Boichi’s own Zoro one-shot, these One Piece “cover” comics will take the story and dialogue directly from Oda’s original story, but will be free to change up the composition and paneling as they see fit.

This certainly does invoke the action of “covers” in a musical sense, where artists will take a song and add their own style and flair to the original composition.

The incredible effects of this project can already be felt when reading Boichi’s one-shot take on the Zoro vs. Mihawk fight. Not only is it strange to re-experience a classic piece of One Piece in a different way, but there are some ways in which Boichi has improved on the original.

Boichi’s wide, expressive paneling that uses both horizontal and vertical orientation along with iconic splash pages – already seen in Dr. STONE as well as Sun Ken Rock, ORIGIN, create a more fluid sense of dynamic action that brings this early part of the series up to the standard of expression that Eiichiro Oda has only achieved now, after 22 years of constant serialization.

Issue no. 34 of Weekly Shonen Jump also carried with it the latest information on the live-action Hollywood One Piece TV series. Matt Owens, screenwriter for Marvel’s Luke Cage and Agents of Shield TV series, will be tackling the project and stated that “One Piece is my all-time favorite story.”

In some respects, the live-action Hollywood One Piece TV series could also be seen as yet another “cover,” as a separate, western studio will be interpreting Eiichiro Oda’s original story.

However, I’m that I’ll be forgiven in saying that I’m more excited to see what comes out of the One Piece cover comics project. The prospect of the multitude of talented artists associated with Shueisha’s Weekly Shonen Jump getting a chance to reinterpret the iconic story is definitely an enticing one. Hirohiko Araki, anyone?