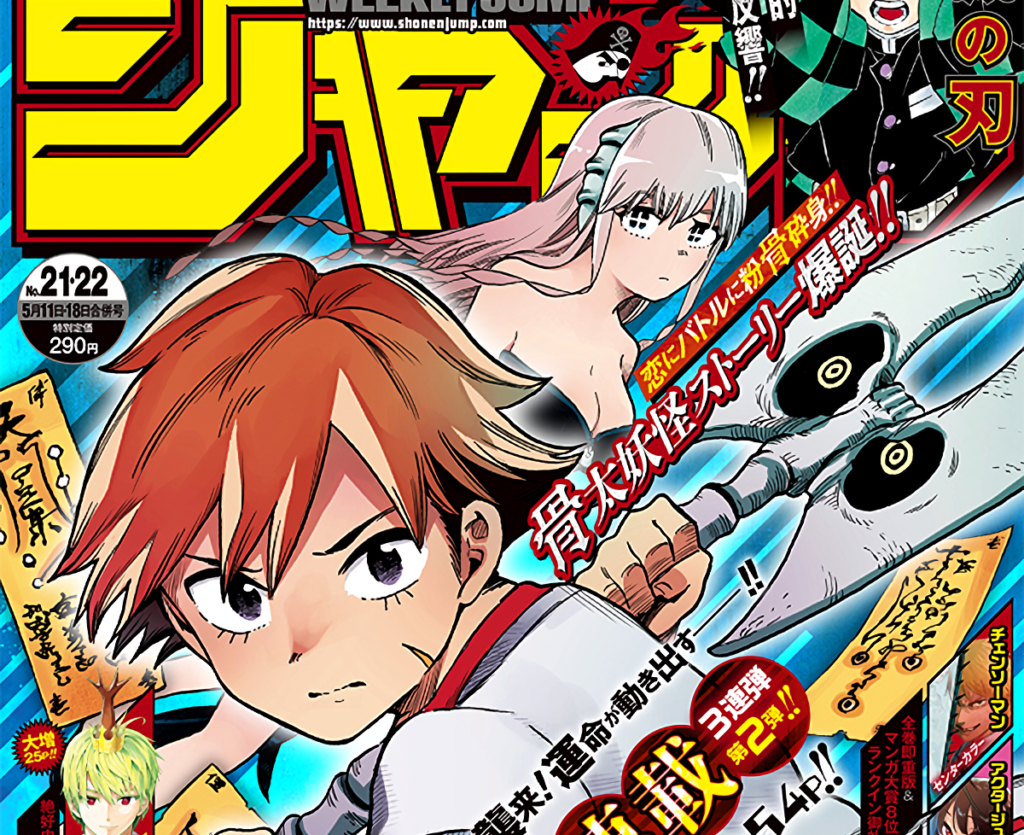 Hello there and welcome to Your Manga Week. Finding time to keep up with all the manga that releases on a weekly basis can be difficult, so I’m here to tell you what’s worth your time and what’s not. We’ll also be discussing the story and arc developments as they come. This week, we’re talking Bone Collection chapter 1, Moriking chapter 2, and Dr. STONE chapter 148.

Welcome back! It’s been two weeks since our last column – how have you been? Managing to keep it together during these stressful times? Good, because Weekly Shonen Jump isn’t slowing down one bit – not only do we have a new series debuting this week in the form of Bone Collection, next time will also see Time Paradox Ghostwriter join the line-up. I say next time because the effects of the Coronavirus have forced Shueisha to push through several delays, including pushing back the next issue of Jump another week. As a result, the next edition of this column will not come for another two weeks, so make sure to keep it together until then.

Starting a new series in the midst of such disconcerting circumstances must be strange for author Jun Kirarazaka, who joined the Weekly Shonen Jump lineup with Bone Collection this week. Luckily, with everyone having so much free time, the prospects for this relatively unknown author (he was apparently an assistant to Daijirou Nonoue, author of The Last Saiyuki, before this) to make a good first impression were potentially quite high. Bone Collection chapter 1, however, is decisively mixed.

The best way to explain Bone Collection is to draw comparisons between it and other series. Kazami is an exorcist, born to one of the great families and balancing yokai-extermination duties alongside his studies. In this sense, it’s a little bit like Twin Star Exorcists. But then, one day, his status quo is broken by the appearance of a beautiful young woman named Paira, who turns out to be an SSS-class youkai with a soft spot for the young man. In this sense, it’s a little bit like Urusei Yatsura.

Drawing comparisons, however, doesn’t help us to get the actual meat of Bone Collection chapter 1. As usual, this first chapter is mostly dedicated to setting up the basic premise of the series: Kazami is an ineffectual exorcist, only enjoying his position on account of the prestige of his family, and only demonstrates his true potential when he uses the forbidden “yokai spell” – a spell that allows the user to borrow the power of a yokai. The only problem is that it often ends up turning the user into a yokai themselves. 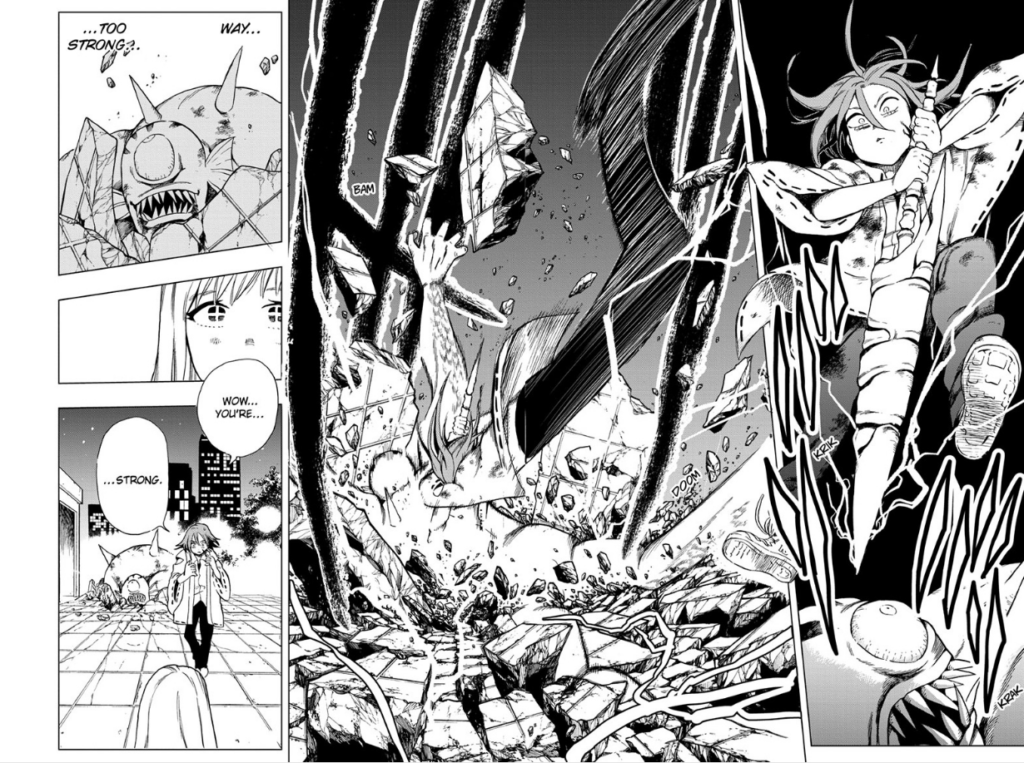 This forbidden technique then gives way to the climax of Bone Collection chapter 1, as Kazami uses the power of Paira to defeat a yokai. It is also easily the most interesting thing about the series yet, creating tension by virtue of its forbidden nature while also posing the question of what might happen to Kazami if he uses it, as well as why it was banned in the first place (I smell a conspiracy). Kazami’s tragic past, too, shows how much trouble he would be in if anyone found out that he used it – which his childhood friend Rino does, leading in nicely to the series’ second chapter.

Nevertheless, there were several aspects to Bone Collection chapter 1 that do not have me confident about the series’ future. Firstly, the art is pretty bad. It’s certainly better than anything I could draw, but the character designs seem particularly rough and undefined. At least its panelling and overall visual presentation is solid, which is more than you can say for MASHLE, which has exactly the opposite problem – interesting character designs but static presentation. 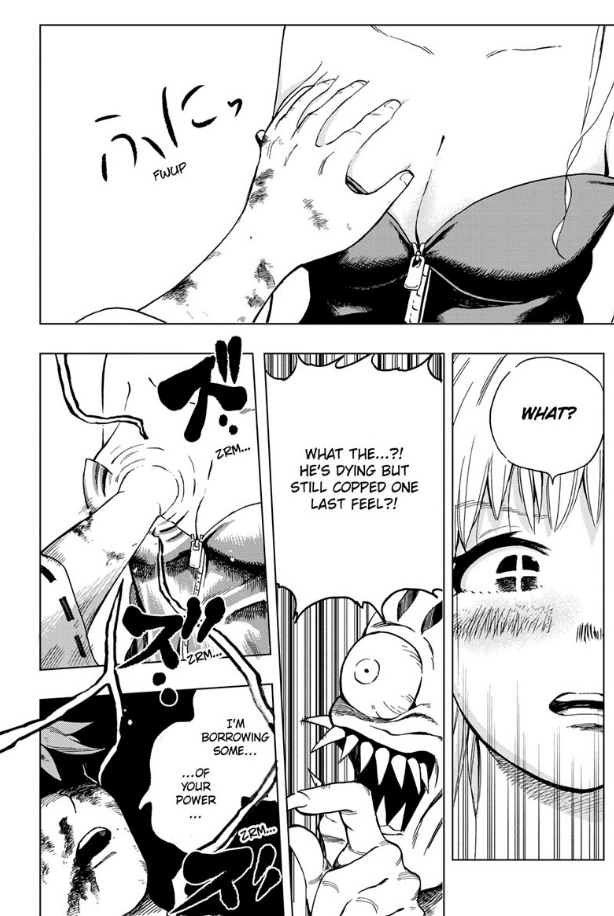 In any case, there’s also a little bit of a disconnect in the tone put forward by Bone Collection chapter 1. In one moment, Kazami is recounting the tragic fate of childhood yokai friend, while in another he’s copping a feel of Paira. A little bit of comedy is obviously always needed to keep things from getting too serious, and the balance between comedy and drama is something that can be improved upon going forward, but that mismatch in tone nevertheless serves to further sour that all-important first impression.

Even so, I do think that there is potential in Bone Collection. Some aspects of the narrative presented in chapter 1 have me asking important questions, and the mish-mash of different elements from different series may combine to make an explosive concoction. My only wish would be that Kirarazaka firm up his art and tone, which would make this series truly one to look out for – especially given its decisively more conventional nature compared to, say, Moriking.

Speaking of Moriking, I ended my review of chapter 1 by saying that I had confidence in the series going forward. This was because of the relative experience of its author, Tomohiro Hasegawa. Moriking chapter 2 proves, in turn, that this confidence wasn’t misplaced. Not only does it lay some important groundwork for the series going forward, it also delivers just enough effective gag to make it worth anyone’s time to read. Things are looking up.

The majority of Moriking chapter 2 is dedicated to the issue of convincing Shota’s parents to let him keep Moriking around, but that doesn’t mean that Hasegawa focuses on this conflict and this conflict alone. In fact, the very beginning of this chapter sees some exposition from the titular insect that clearly sets up the structure of the series going forward. 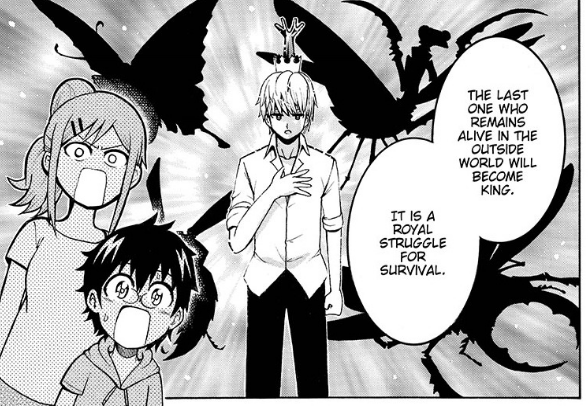 This clearly lays the groundwork for a whole host of future conflicts, which may end up pushing Moriking away from its comedic roots and further towards the standards of a battle manga. On the whole, this is clever work by Hasegawa, as action always tends to sell well and provides easier frameworks for storytelling, but only time will tell if this transformation truly takes place, and to what extent.

In any case, the rest of Moriking chapter 2 is made up of relatively normal comedic shenanigans as Shota tries to convince his parents to let him keep Moriking. Despite being very over-the-top and also very loud – which was something that bugged me about the first chapter – Shota’s eccentric parents and the Evangelion references were enough to soften up my heart just a little bit and find some enjoyment in the exchanges. There’s also a nice moment between Moriking and Shota’s dad, where the former reminds the latter that he told him to be a good friend to his kids because he is often away for work, which is surprisingly touching.

All in all, things are looking up for Moriking. Not only is the future course of the series more or less plain to see, the chapter-by-chapter shenanigans are working mostly as intended. If Moriking chapter 2 proves anything, it’s that all that’s left for Tomohiro Hasegawa to do is to keep up the good work – as much as he can in these tough circumstances, that is.

Bringing up the rear end of this week’s column after Bone Collection chapter 1 and Moriking chapter 2 is Dr. STONE chapter 148, which is delivering on a question that has plagued the series since the very beginning: what about the rest of the world? In other words, Senku and crew finally make landfall in America and set about discovering just what has happened across the pond over the course of several millennia.

For starters, Dr. STONE chapter 148 confirms that the petrification was indeed global. This was a presumption both we, the readers, and the characters had long held despite the lack of any concrete evidence, so there’s that. Gen is slightly disappointed that his bold proclamation at the end of the Stone Wars arc didn’t turn out to be true, but at least we get this magnificent moment as Senku and crew realize exactly where they are sailing. 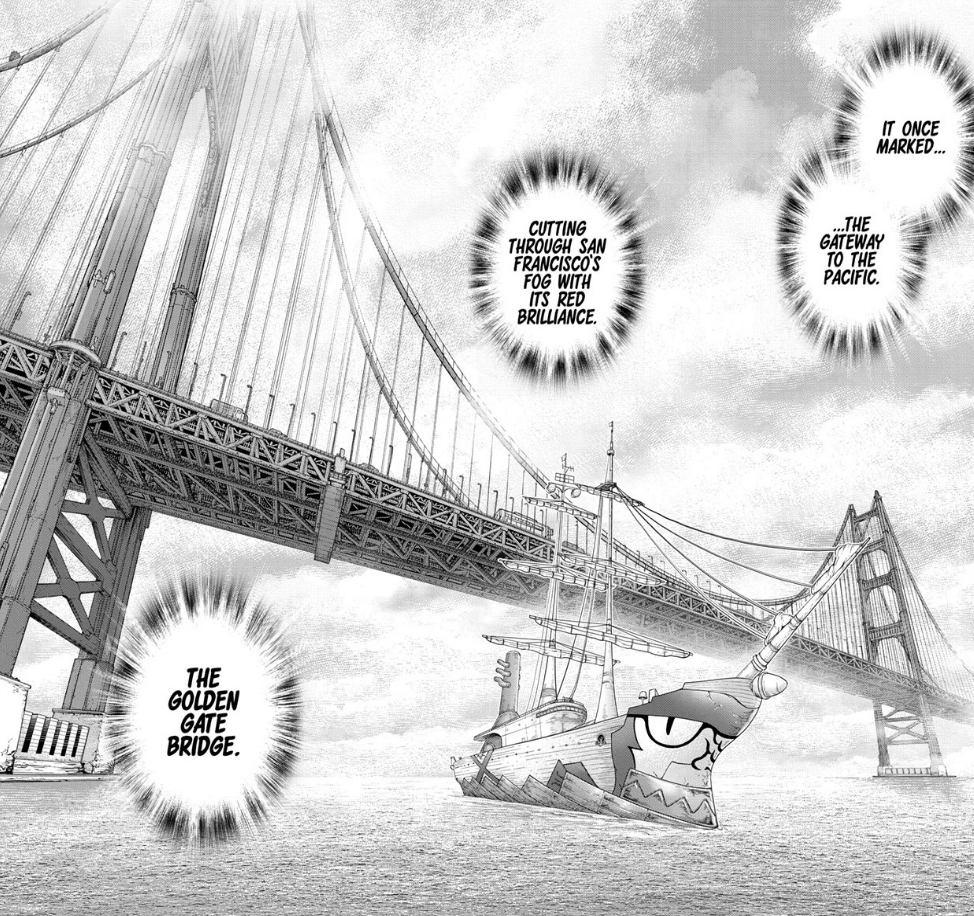 This moment honestly rivals the moment at the very beginning of the series where Senku, Taiju and Yuzuriha stumble upon the Kamakura Daibutsu in terms of demonstrating the effects of time and the great sadness that comes with the collapse of modern human civilization. Only, in the case of the Daibutsu, it’s all about the fact that it has remained despite everything, whereas the Golden Gate Bridge is only awe-inspiring in its absence. Plus, it helps that I have actually been there!

In any case, once Senku and crew make landfall in Dr. STONE chapter 148, things very quickly start to fall into place. They make their way up the Sacramento river, split into two teams: one for reconnaissance and one for resource replenishment. An encounter with some crocodiles also confirms that there is indeed corn to be found, which was the reason why the Kingdom of Science made the voyage across the Pacific in the first place.

But before that truth can be unearthed, it is up to Tsukasa and the warrior team – including Kohaku, Hyoga, and others – to defeat the killer crocs. It is worth noting that this is actually the first time that Tsukasa has used his might to help the Kingdom of Science since being revived, and it is glorious – showing just how far the series has come from the beginning of its story.

All in all, reading Dr. STONE chapter 148 was an entirely different experience from other chapters in the past. Not only are we exploring completely new geographical and narrative territory, almost every page has the potential to reveal some sort of essential plot point or narrative detail. In this sense, as Senku and crew make their way through the rest of the continent, you can be sure that I’ll be hanging on their every word.