The editorial team over at Weekly Shonen Jump seem to be on the warpath at the moment. Just last week, we got the news that Jimoto ga Japan would be transferred to Saikyo Jump, condemning it to a slow death, and similar news has surfaced this week. According to a leaked image from next week’s Weekly Shonen Jump, the NARUTO sequel manga BORUTO: NARUTO NEXT GENERATIONS will be moving to V Jump. 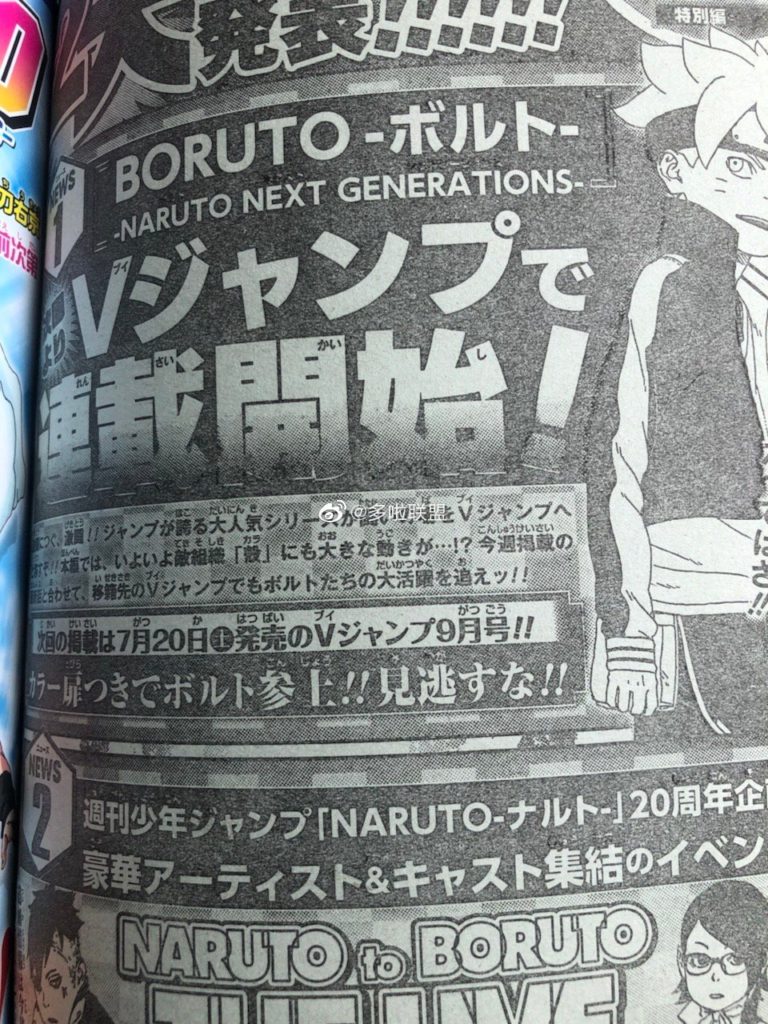 V Jump certainly isn’t as much of a death sentence as Saikyo Jump, that’s for sure, but it’s still a relegation for BORUTO. The monthly magazine carries manga attached to popular video game, anime or trading card franchises such as Digimon World Re:Digitize Encode, Dragon Quest: Souten no Sora and Dragon Ball Super. BORUTO certainly won’t be out of place in such a line-up, being a sequel manga to NARUTO.

That being said, it’s worth taking this news with a pinch of salt. The source here is a “leaked” image from Weekly Shonen Jump, judging by its resemblance to the news pages that often come in the magazine. None of the official Shueisha websites or social media outlets have confirmed this news, either.

Even so, if you look at the performance of BORUTO over the years, this relegation certainly comes as no surprise. Volume sales for the series have been dropping steadily since the solid performance of the first volume, with the seventh volume only selling around 150,000 units. It also never ranks particularly high in the weekly readership polls that have an effect on the Weekly Shonen Jump table of contents.

On a conceptual level, I’ve also always struggled to see BORUTO catching on. The sequel series retreads a lot of the same ground as NARUTO, making it unattractive for established fans of Kishimoto’s franchise, but in a much more drawn out, slow-paced fashion – making it hard, in turn, to pull in new fans who have yet to experience Kishimoto’s ninja universe.

Hence why I’m willing to believe this supposed BORUTO leak, where I would usually wait for official sources to confirm such information. The BORUTO V Jump move also seems to underline a recent trend on the editorial side of Weekly Shonen Jump, where series with popular franchises attached to them are relegated to lesser magazines instead of outright cancelled.

I suppose that’s a win-win for both the author and the magazine, as the author gets to continue on with their series (albeit in a magazine that has less clout) and the magazine gets more room for new serializations. The BORUTO V Jump move alongside the Jimoto ga Japan Saikyo Jump move leaves two slots open for fresh blood – and I can’t wait to see what the magazine has in store for us.