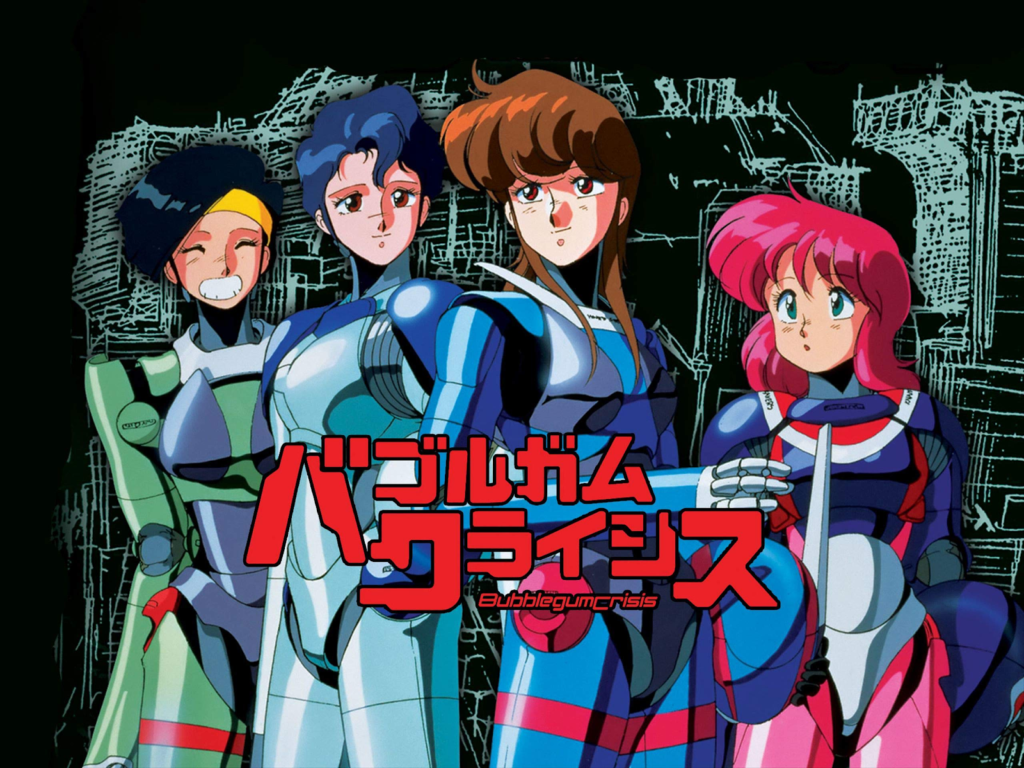 There’s a lot of anime out there that have cutesy names in order to accentuate the kawaii aspects of the show, but Bubblegum Crisis does sort of a bait-and-switch with that idea. Instead of a cute, silly show like the name may suggest, Bubblegum Crisis takes place in a futuristic, cyberpunk Tokyo.

While not quite dystopic, this Tokyo (Sometimes referred to as Mega Tokyo) has been subject to a massive earthquake that split the Kanto region in two, somewhat stratifying the two resulting regions into upper-class and lower-class regions.

In this future, human androids known as Boomers are running amok on the streets of Tokyo. In order to stop them, a vigilante group of women known as the Knight Sabers dons special armor known as “Hardsuits” to fight back against Boomers that have gone berserk.

The Historic Origin of the Term “Bubblegum Crisis”

Bubblegum Crisis is a slick and stylish cyberpunk anime with mecha elements, and isn’t afraid to deal with sex and violence, so to paraphrase a poet, “What’s in a name?” Series writer and co-creator Toshimichi Suzuki explained that a bubblegum crisis is analogous to blowing a large bubblegum bubble, and while it’s neat and fun to blow a bubble, it eventually pops all over your face.

That sense of precarity in the face of what seems like a good time is what the anime is supposed to capture. Series director Katsuhito Akiyama concurred in an interview, speculating that because the anime was developed at the peak of an event known as the Japanese asset price bubble, or “Bubble Economy” (The Bubble Economy lasted from around 1986 to 1991, and Bubblegum Crisis was released in 1987), Suzuki had a lot of foresight in creating a world that seems bright and cheerful until it very much isn’t.

The anime series draws on quite a few influences in order to bring its world to life. The world itself is very reminiscent of the film Blade Runner, and the opening sequence in the first episode is strikingly similar to that of the film Streets of Fire, where a concert is being performed as part of a montage.

In fact, one of the main characters Priss is in a band called Priss and the Replicants. The humanoid androids in Blade Runner were also called Replicants.

The story in Bubblegum Crisis focuses on the Knight Sabers and how their individual lives intersect with their time spent fighting Boomers. The character design for the Knight Sabers was done by Kenichi Sonoda, who was also working on the design for the sci-fi anime Gall Force at the time. Animator and later anime director Shinji Aramaki assisted with the design of the power armor.

The leader of the Knight Sabers is Sylia Stingray, a businesswoman, and heiress. Her father originally created the Boomers but was killed in a suspicious accident when Sylia was a child. At the time she was sent a data pack that filled her in on the incident, as well as the plans of the company that functions as the series’ antagonistic force, the Genom Corporation.

The Genom Corporation is one of the leading producers of Boomers, but Sylia was also given specifications for the suits that the members of the Knight Sabers wear. Sylia also runs a lingerie shop out of her building, which functions as the Knight Sabers’ headquarters.

Priss, short for Priscilla, Asagiri is the lead singer of Priss and the Replicants and is usually seen driving around on a cyberbike and acting tough when she’s not in her alter-ego for her band. 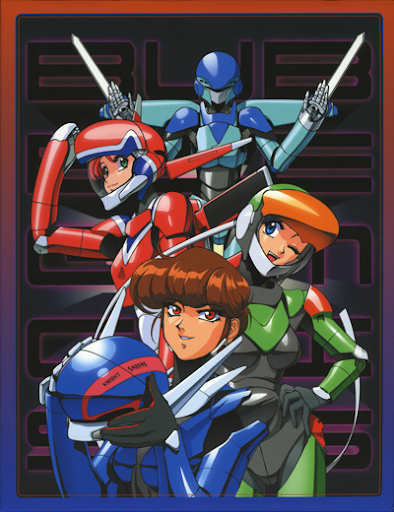 Priss is usually the muscle of the group, and in combat her bike can actually transform into a mech or even an exo-suit for even more added muscle. Priss’ suit has a unique set of weapons, as do all of the Knight Sabers.

Out of all the Knight Sabers, Linna Yamazaki is probably the most down-to-earth. She often functions as a sense of empathy and decency when dealing with problems the Knight Sabers run into.

Nene Romanova functions as the gang’s kawaii element. Despite working for the local police force, the AD Police, she’s often very bubbly and loud, with a penchant for sweets. She operates as the Sabers’ mole within the ADP, feeding Sylia information about cases and goings-on. She also assists the group by hacking into servers and other technology.

The Knight Sabers are also assisted by Sylia’s brother Mackie. He can operate one of the suits but usually drives around a special van owned by Sylia’s lingerie company that contains the girls’ suits and bikes.

Mackie is actually the jumping-off point for the Tenchi Muyo! franchise. One of the series directors, Hiroki Hayashi, described his initial thoughts for the harem anime series in an interview, wondering what it would be like if Mackie was the main character surrounded by women.

This series ran for about three episodes before it was canceled and follows Leon McNichols, a regular character in Bubblegum Crisis, during his early days at the ADP before running into the Knight Sabers. This eventually was built out into a series known as AD Police Files: To Protect and Serve.

Released in 1999, this spin-off is also a prequel but reimagines certain elements of the Bubblegum universe. Another three-part OVA, Parasite Dolls, was released in 2003 and follows a specific branch of the APD known as The Branch as they track down terrorists and particularly dangerous rogue boomers.

In 1999 Bubblegum Crisis Tokyo 2040 was released, and rebooted the original series. The series focuses much more on Linna, who in this version has just moved to Tokyo to work in an office building. While those around her are dismissive of the Knight Sabers, she’s enamored with the idea of fighting with them and presses Priss to let her become one.

Once she does her focus is on becoming the best out of the Knight Sabers. There are other adjustments to characters and stories as well; Mackie is more reserved, Leon is older and gruffer, and everyone’s character model has been adjusted somewhat.

There were also a variety of comic books written about the world of Bubblegum Crisis. Several artists wrote their own, even original character designer Kenichi Sonoda.

Judging by the spin-offs and continuations in the Bubblegum universe it seems more often than not one of its greatest assets was the world it created. Papers could and probably have been written about worlds in which not-quite-human robots are replacing humans, with most unaware that they’re actually robots such as in Parasite Dolls, Ghost in the Shell, and even movies like Perfect Blue.

Bubblegum Crisis influenced a generation of hard sci-fi, and all with a name that suggested a much cuter world.