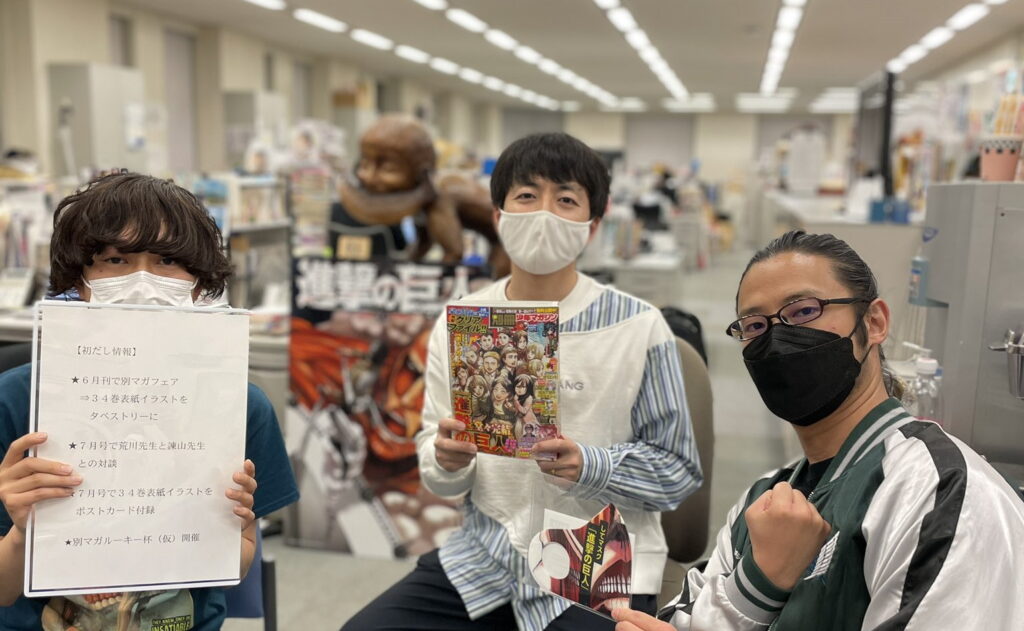 A bumper Attack on Titan livestream revealed a bunch of exciting projects over the weekend, including a new, free online exhibition and a sit-down conversation between series creator Hajime Isayama and Hiromu Arakawa (Fullmetal Alchemist, Silver Spoon).

We already knew that this event, streamed live via the official Weekly Shonen Magazine YouTube channel, would bring together several of the editors that worked on the series behind the scenes to commemorate the series’ ending. What we didn’t know, however, was that there would also be so many exciting announcements!

First, the livestream announced that there would be a free, online Attack on Titan exhibition starting 9 June, showing off key scenes from the series. A final character book will also be released on that same day, alongside the first of four full-color Attack on Titan volumes consisting of chapters previously published in Bessatsu Shonen Magazine.

The June issue of Bessatsu (9 May) will also contain a long interview with Attack on Titan creator Hajime Isayama, taken from over three hours of conversation.

Probably the most exciting announcement to come out of this Attack on Titan livestream was the fact that Isayama would be sitting down with Fullmetal Alchemist creator Hiromu Arakawa for an interview/conversation.

What these two legendary creators talked about exactly, I can’t even begin to fathom. The gravity of their meeting is summed up, however, if we understand Fullmetal Alchemist and Attack on Titan to be the two defining series of the 2000s and 2010s, respectively. Those interested should pick up the July issue of Bessatsu when it goes on sale this June.

All the announcements coming from this Attack on Titan livestream show that while the manga is over, the series as a whole isn’t yet: not only do we have the second part of Studio MAPPA’s anime to look forward to, we’re also getting a bunch of stuff in the coming months.