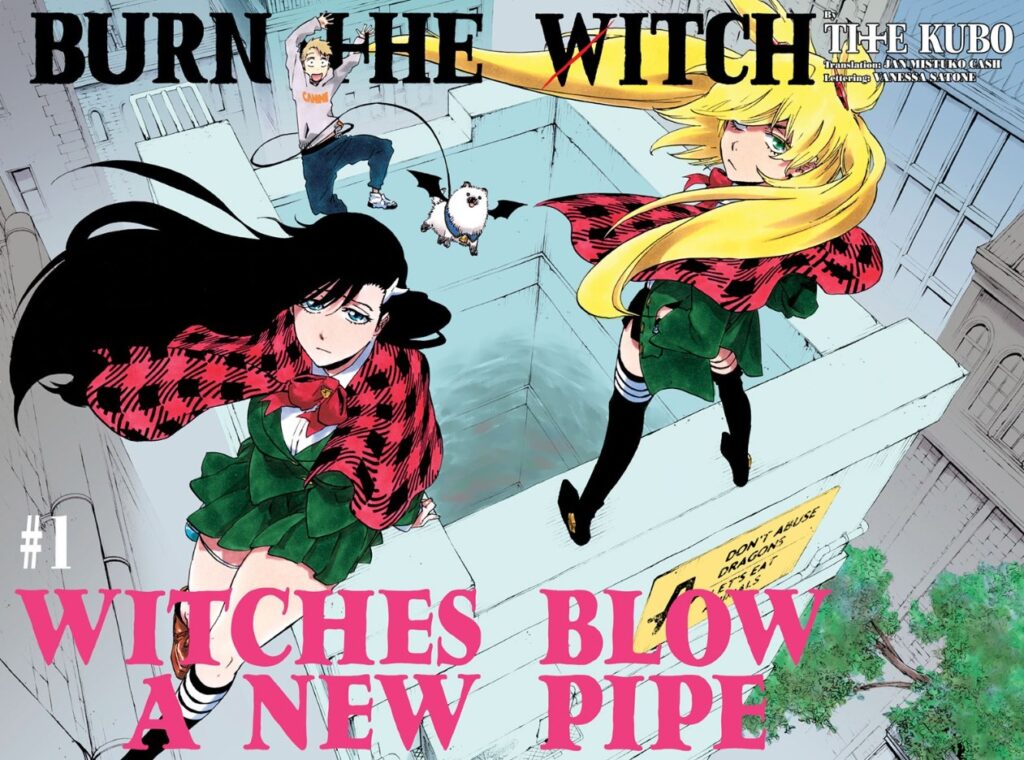 The beginning of a new week can only mean one thing: time for new Weekly Shonen Jump! Shueisha’s legendary manga magazine has been releasing every week for over 50 years at this point, and it still has enough exciting series in its roster to justify its hallowed status. Plus, with VIZ Media now publishing the entire thing in English, there’s never been a better time to dive in. In this column, Jacob investigates the latest and greatest in the world of Weekly Shonen Jump, telling you what’s worth your time and what’s not. This week, we’re chatting Burn the Witch chapter 1, My Hero Academia chapter 281, and Agravity Boys chapter 32.

Welcome back! Weekly Shonen Jump was on break last week, so we took one as well. To be honest, that was sorely needed, as Act-Age’s cancelation really hampered my enjoyment of the latest chapters last time. Still, we did get a little bit of Jump goodness on Sunday, as The Promised Neverland duo’s latest one-shot was published via VIZ Media. Even though it came a week after its initial, Japanese release, I still enjoyed it – a very competent mystery story that shows that the pair have more than enough potential to come back and create another hit in the pages of Weekly Shonen Jump. Anyway, on with the manga.

Burn the Witch is finally here! It’s been over two years since Tite Kubo published his initial one-shot at this point, meaning that the excitement for this series has been building for a long time. Nevertheless, temper your expectations. Burn the Witch chapter 1 is the first in a series of four chapters that will see Kubo’s latest creation stick around until only the end of September, which is hardly the glorious return that many people were hoping for. Furthermore, it seems as if the links between this manga and the upcoming anime movie are stronger than we once thought, casting doubt on whether or not this limited series can stand on its own two feet.

One of the first things that stood out to me about Burn the Witch chapter 1 was its slick presentation. Tite Kubo’s art style has always been something that I’ve respected, but he is going all out with his presentation this time around: opening on a bold full page spread, it transitions bombastically into the story surrounding Ninny and Noel. 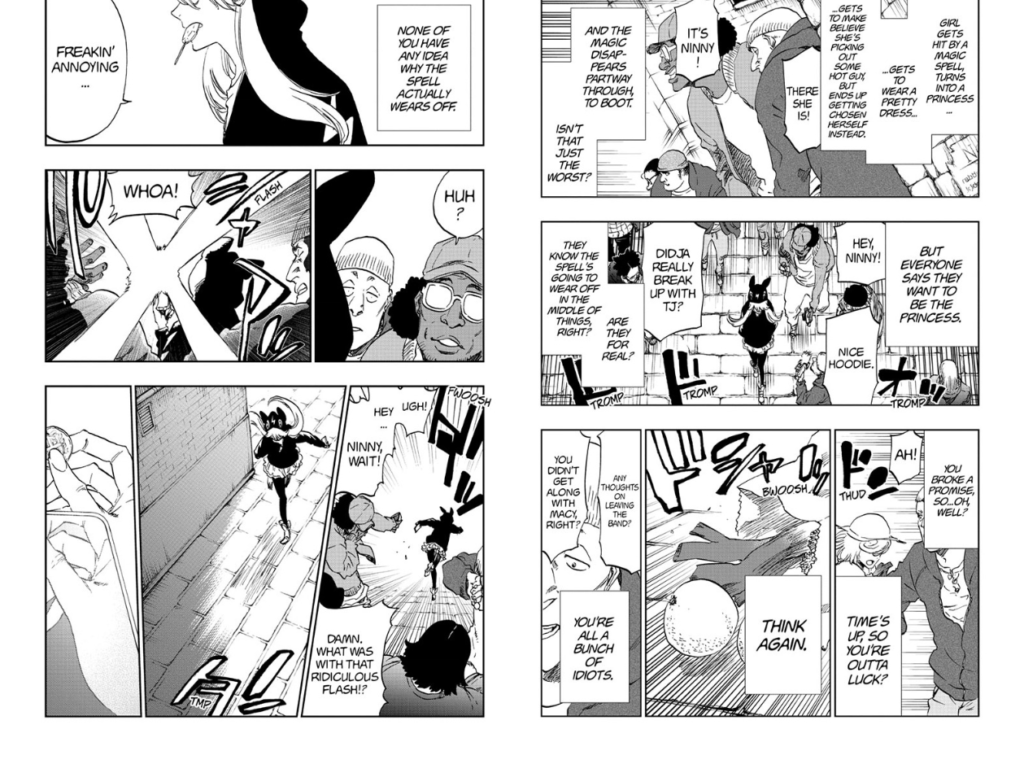 This is something that continues throughout Burn the Witch chapter 1, with hardly an idle moment wasted. Yet, I have a theory. Part of the reason why Burn the Witch chapter 1 feels so cinematic may be because it is, in fact, based on the movie screenplay – something which isn’t so unthinkable considering that the limited series and movie were announced at the same time.

Furthermore, the layering of dialogue and narration at many points throughout Burn the Witch chapter 1 very much feels like Kubo’s way of representing voiceover in the medium of manga. That’s not to say that it doesn’t work – it does make reading this opening chapter a breeze – but it has me worried that reading this manga might end up being the same experience as watching the film. And if push comes to shove, I think I’d rather watch the film.

Burn the Witch chapter 1 doesn’t progress much beyond the initial one-shot, either. Instead of treating that story as a sort of ‘test run’ as many authors do, Kubo has decided to continue on the same path – following the conflict surrounding Balgo and Osushi as they threaten to bring chaos to Reverse London. 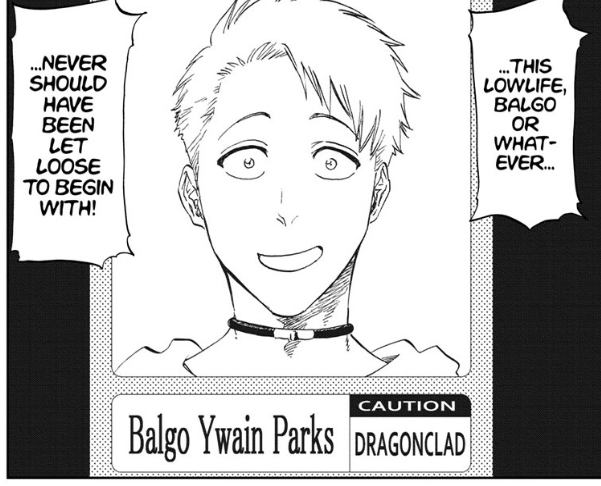 Balgo was hardly the best part of the initial Burn the Witch one-shot, and if I am honest, I probably would have preferred to have seen him cut. His obsession with Ninny is a little grating, and any time spent focusing on him is ultimately time taken away from our leads – without a doubt the best part of the series.

All in all, Burn the Witch chapter 1 wasn’t really as triumphant of a return as I think Shueisha and Weekly Shonen Jump wanted it to be. True, it did generate a lot of conversation and bring in a lot of eyeballs, but it’s mixed reception hardly makes it feel like the crowning glory of the Bleach 20th anniversary that it was supposed to be. At least we still have the continuation of the TV anime to look forward to, but in terms of original content, we’re stuck with this.

Worth the wait, right?

Luckily, Bleach’s successors in the realm of Weekly Shonen Jump battle manga had an incredibly solid set of chapters this week. MASHLE continues to demonstrate why its shift to action is proving so popular, and Jujutsu Kaisen has straight up made the antagonist the main character. Gege Akutami has got some gonads.

Nevertheless, I chose to feature My Hero Academia chapter 281 this week for a couple of reasons. Firstly, I don’t think I’ve covered the series’ current war arc nearly as much as I should have done, so I am trying to make up for that going forward. What’s more, My Hero Academia chapter 281 is full of moments that had me gawking at the quality of Horikoshi’s writing, which doesn’t seem to have been hampered one bit by the shift to digital. 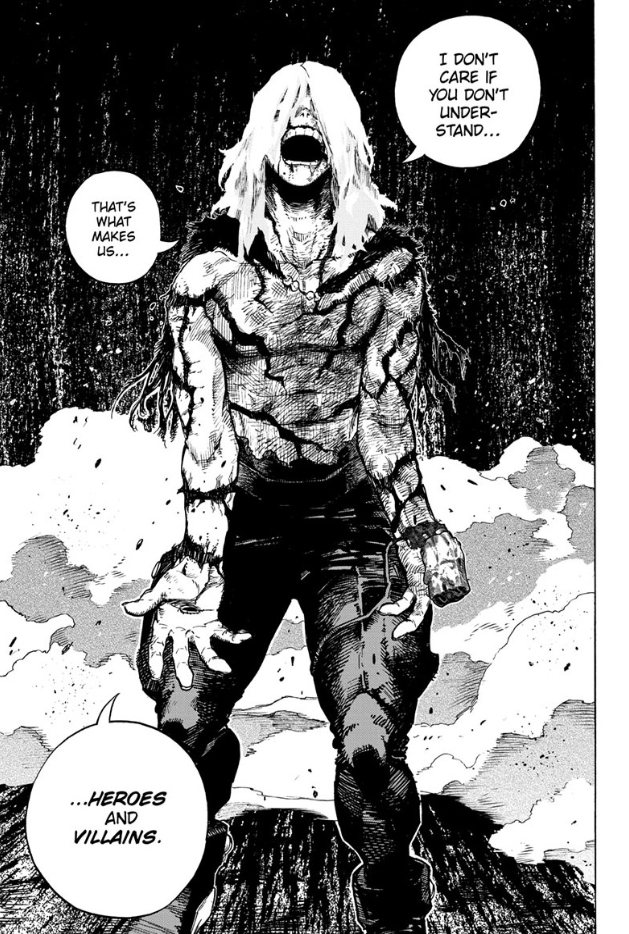 The first thing that we should get out of the way is the absolute beast that is Tomura Shigaraki. I already realised back in chapter 270 how much he had improved as a villain, but My Hero Academia chapter 281 makes this even clearer: the shifts in his design as well as overall presence are making him into one of the best villains in Weekly Shonen Jump right now, possibly only beaten out by Chainsaw Man’s Makima.

There are more subtle moments in My Hero Academia chapter 281, however, that I would like to focus on. The first comes when Gran Torino is grabbed by Tomura, possibly signalling his demise: Horikoshi delivers to us a flashback detailing Nana Shimura’s struggles with her family, having to give up her own son to protect him from All for One. Given that Tomura turned evil directly as a result of this decision, it feels like the old hero is coming face to face with his past mistakes – lending credence to the villain’s declaration that “You heroes hurt your own families just to help complete strangers.” 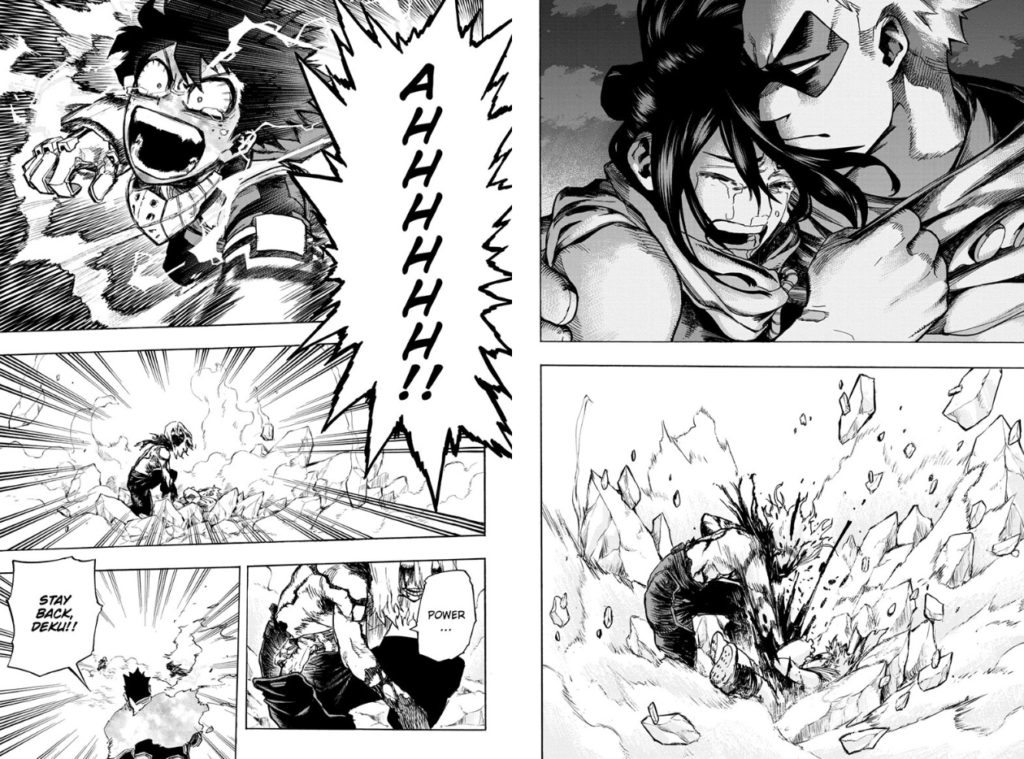 Watching Horikoshi’s approach to the idea of a hero change and evolve over the course of the series has been a joy to see, and so has watching the character development of one Izuku Midoriya. Starting life as a very weak wannabe hero, the series protagonist is showing off all of his newly obtained powers in My Hero Academia chapter 281 as he uses Blackwhip to restrain Tomura. This comes after being held back for many chapters by such characters as Endeavor and Gran Torino, but now he is in full force.

Speaking of Endeavor, the current number one hero’s desperate attack at the end of My Hero Academia chapter 281 leaves off on an uncertain note. Despite being restrained by Deku, Tomura manages to fish out what appears to be one of Overhaul’s Quirk-erasing bullets from his pocket, hinting that something terrible is about to happen.

Could this be the moment where the number one hero loses his powers for good? And what if it is Deku? This arc has been crazy enough so far, but it’s about to get a whole lot crazier.

Finally, we come to Agravity Boys chapter 32. After all of that heavy-hitting battle manga discussion, you’d be forgiven for wanting a palette cleanser – that is, after all, the beauty of an anthology magazine. There were a couple of more light-hearted series that I thought had good chapters this week – Magu-chan, Hard-Boiled Cop and Dolphin, and Moriking all impressed me – but I ended up going for Agravity Boys chapter 32 for the simple reason that it proved me right.

Back in my initial review of the series, I noted that Atsushi Nakamura’s approach to writing gags had shifted for the better away from the objectification of Chris and towards a more equitable approach. The fruits of that shift are plain to see in Agravity Boys chapter 32: while Chris is the butt of one of the jokes, he is not the only butt that the reader is invited to laugh at. 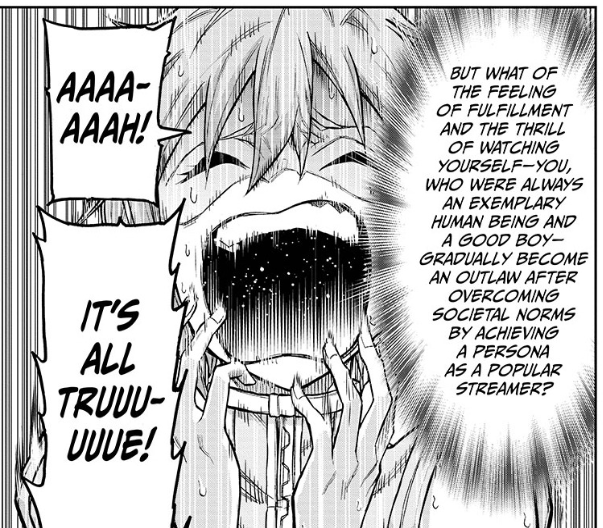 Agravity Boys chapter 32 starts off on a bit of a sketchy note. We are suddenly introduced to the concept of an ‘Omo’ card, a type of points card that our characters use to ask favors from the Higher Being (H.B.) in exchange for entertaining it. While Agravity Boys has never had the strongest of narratives – relying more as it does on chapter-by-chapter comedy – it does at least have one, making the concept of retroactively adding something to the story slightly worrying.

Nevertheless, Agravity Boys chapter 32 somehow makes it work. Perhaps it is because of how aware the chapter is of its own hypocrisy – addressing the reader at the very beginning, saying “I’m sure you’re all a little confused about the sudden appearance of this point card” – but I think the moment where I became convinced was when kamura used it to make a hilarious gacha gag. 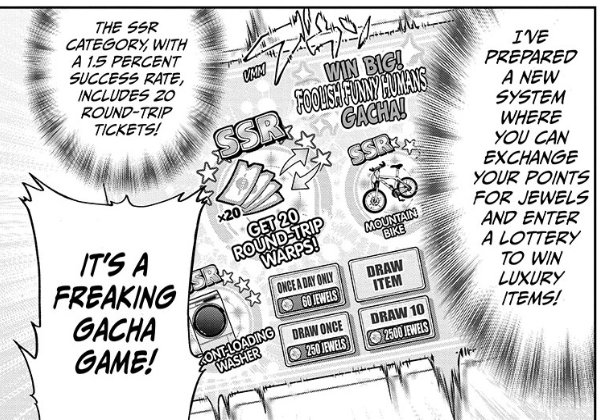 The meat of Agravity Boys chapter 32, then, is all about how the different characters use and abuse the points they have racked up in exchange for entertaining H.B. As mentioned, there is a significant portion focused on the character of Chris, but the final gag of the chapter – where they all meet inadvertently in embarrassing costumes on the planet of Alesta – spreads the joke out a little more evenly among the cast and makes it much more palatable. Many laughs were had, which makes Agravity Boys chapter 32 a good one in my book.

On a final note, this chapter was the chapter that finally convinced me to start collecting Atsushi Nakamura’s series as physical volumes. I’ve started to do this a little more as of late, and I am in the process of writing something about it, but I’m trying to only collect those series that mean a lot to me. And given the journey that I have gone on with Agravity Boys, I think it deserves a place on my bookshelf.

You can read Burn the Witch chapter 1, My Hero Academia chapter 281, and Agravity Boys chapter 32 for free via VIZ Media’s Shonen Jump.