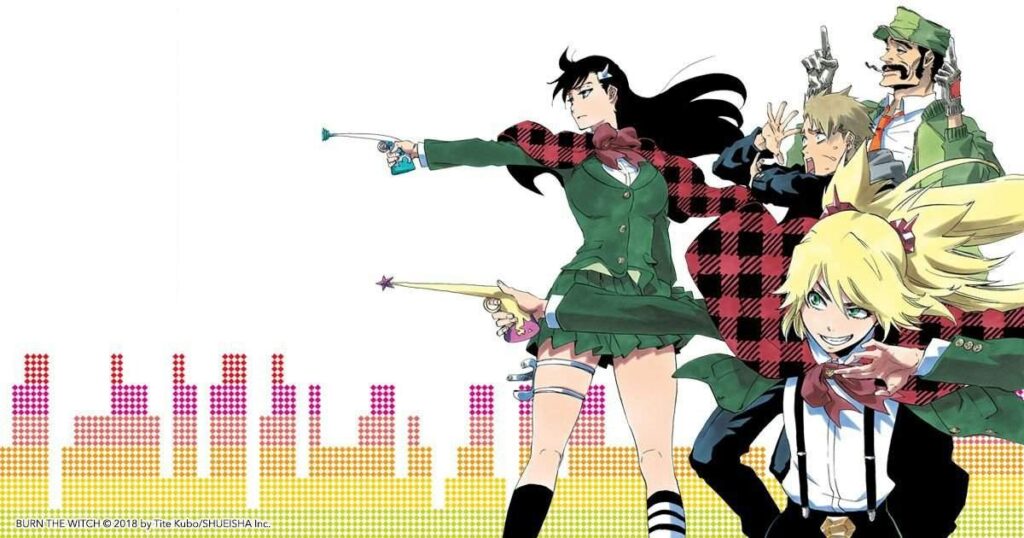 Tite Kubo’s one-shot manga, Burn the Witch has gained a lot of attention as of late. This one-shot is being produced into a film by Studio Colorido. While we have talked about the one-shot in general, we have not done a review of it.

This one-shot is set two years after the end of Bleach, and we get to see the inner workings of the Western Branch of Soul Society in Reverse London which protects people from supernatural creatures. While the shinigami protect Japan, London has witches protecting the people from dragons. In this case, dragon is an umbrella term for uncontrollable supernatural forces. This one-shot follows an average day of work for two witches, Noel and Nini.

This one-shot focuses on Noel Niihashi, a witch who works for the agency, Wing Bind. Noel’s pretty stoic for the most part, but she does have a silly side that comes out in snarky remarks. She resembles Byakuya from Bleach, but there’s no relation between the two that we know of.

Nini Spangle is Noel’s partner, and she also works as a model. As Noel’s foil, she’s extremely rude and temperamental, but depending on the situation, she can also be kind. She resembles Mary Saotome from Kakegurui in her demeanor and appearance.

Balgo is a human who constantly harasses Noel on her way to work. His main motivation is that he wants to look at her underwear, and he goes through great lengths to do so. However, when his friends are in danger, he grows up and won’t hesitate to put his life on the line.

This one-shot is interesting, and it has a lot of potential to be something amazing if it becomes a full-length series. Kubo set a great foundation in terms of characters, creatures, and story. While the world and the characters have the potential to grow to become larger than life, there are some things I could’ve done without.

The story’s premise has the potential to become a fantastic adventure series if it is turned into a manga. The idea of a society of witches going around London neutralizing creatures is pretty whimsical. It also sets the stage to introduce villains based on British icons, both fictional and real.

For a one-shot, the world-building was done well. 60 pages isn’t a lot of time to get in a lot of details in terms of world-building, but the little nuggets here and there do show that Kubo put some thought into possibly continuing the series. In the one-shot, Nini mentions wanting to be promoted to be a part of the Sabre Squad that protects London showing that Kubo probably has the inner workings and the hierarchies of Reverse London’s witch society.

Noel and Nini are a fun duo, Noel’s stoic disposition and Nini’s very reactive one are a classic recipe for quick-witted banter and overall laughs. While their clashing personalities makes it easy to set up a lot of comedic relief, they know when to get down to business. When they do, they have each other’s backs, and they trust each other to do so. It’s very nice to see that kind of dynamic in any situation.

First impressions are important. In a lot of cases, they make or break your interest in whatever it is you’re watching or reading. In this case, the first few pages of the manga almost broke my interest.

The first page starts with Noel stating that she likes uniforms since they let people know her credentials. I found this odd, but I figure she likes people knowing she’s capable and uniforms non-verbally let people know what you do for a living or in Noel’s case, where she goes to school. This then follows with people on the streets commenting on how sexy she looks.

After reading this, I thought it was going to go into some ecchi territory given on how much of an emphasis there was on Noel’s looks. Thankfully it didn’t, but that fear was present until I finished reading.

My main issue with this isn’t the emphasis on Noel’s looks or the story in general; it was Balgo. First impressions are important, and when it comes to Balgo, my first impression of this character is a poor one. Right off that bat, Balgo’s perverted stalker antics are unamusing. His

obsessing with seeing Noel’s underwear leads him to concoct elaborate schemes to get a peek which shows that he can only be motivated to do great things if they align with his perverted desires. This behavior is continued throughout the one-shot as a running gag, and it gets old really quickly.

Of course, this is my personal opinion based on the facts. I generally do find these kinds of characters very tacky, and overall, I don’t like them. A prime example of this type of character in recent times is Mineta from My Hero Academia.

However, Balgo does have one redeeming quality: his loyalty to his friend. Balgo did what he could to try to save his best friend Selvie, who was a dragon disguised as a human, from eating Nini and giving in to his dragon urges. While it didn’t work out, it did make me respect him for a minute for his undying loyalty to his friend, but that quickly shattered afterwards because he reverted back to being a panty obsessed creep.

Given that my only big issue with the one-shot is Balgo and his questionable character, Burn the Witch is a pretty decent read that does leave you wanting more. The story itself is solid and most of the characters can come off as one dimensional, but given that it’s only a one-shot, this gets a pass. The one-shot is interesting to follow, and it introduces readers to a world of mythical possibilities. On a 5 point scale, I’m giving Burn the Witch a solid 4.

Read it For Yourself