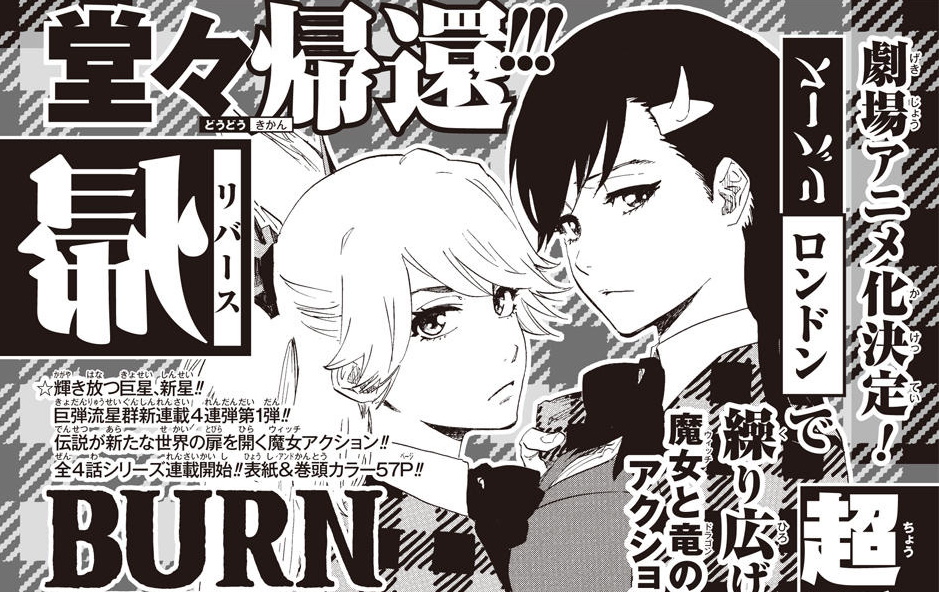 The wheels of fate have turned once again, bringing with them changes to the Weekly Shonen Jump line-up. While fans should already be more than used to the prospect of cancellation, the fact that these series are supposed to fill the holes left by the departure of Haruichi Furudate’s Haikyu!!, as well as Bone Collection (rumored) and Mitama Security, makes them noteworthy. That, along with the fact that Bleach author Tite Kubo is making his grand return.

That’s right: after months of speculation and a full two years since the initial one-shot, Burn the Witch is finally joining the Weekly Shonen Jump line-up as a proper series on August 24. That being said, it will only be sticking around for four chapters – we did know beforehand that it would be a limited-time series, but you may have been forgiven for thinking that it might stick around for more than a month. Let’s hope that it can live up to the hype. 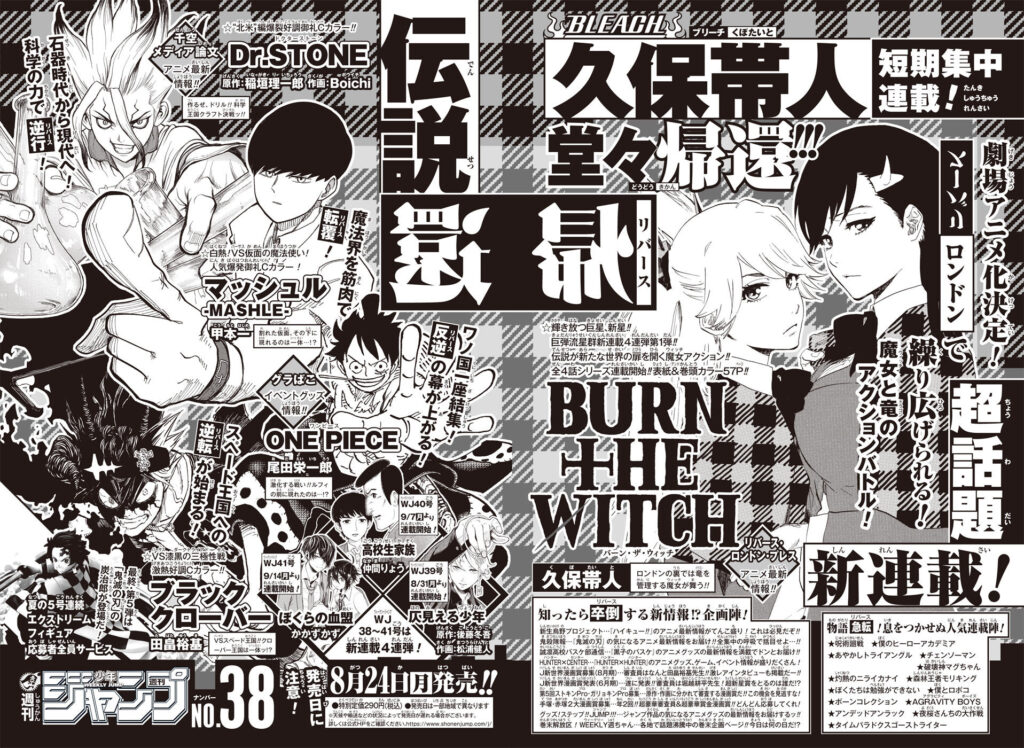 Coming the week after Burn the Witch will be Honomieru Shonen on August 31. Illustrated by Kento Matsuura and written by Tougo Gotou, this sees Kento’s excellent art break away from a terrible story in Tokyo Shinobi Squad to match something that is hopefully a lot better, especially given that it is based on the one-shot that won the 2018 Golden Future Cup.

Next up will be Koukousei Kazoku (High School Family) on September 9, acting as Ryo Nakama’s grand return to the Weekly Shonen Jump line-up after several years out of the game. Nakama made his debut in 2013 with Isobe Isobee Monogatari, which was only supposed to replace One Piece for a single issue but ended up proving so popular that it was brought back as a proper series. Here’s hoping that Nakama can recapture that magic.

Finally, we have another newbie entering the Weekly Shonen Jump line-up: Kakazukazu, who will be bringing back his 2019 Seiyaku no Aka (The Red Pledge) vampire one-shot as a full fledged series. Titled Bokura no Ketsumei (Our Blood Oath), it shows that someone is looking out for him – either at the Shonen Jump office or in the reader surveys.

All in all, these latest additions to the Weekly Shonen Jump line-up are a mixed bag. While Burn the Witch will no doubt prove popular, there are two more inexperienced authors making their entrance in the form of Honomieru Shonen and Bokura no Ketsumei. Nakama Ryou will no doubt benefit from his prior experience on Isobe, but I’m not sure how I feel about yet another gag manga.

What are your thoughts on the upcoming additions to the Weekly Shonen Jump line-up? Are you excited for Burn the Witch? Let us know via social media or our Discord server, linked below.