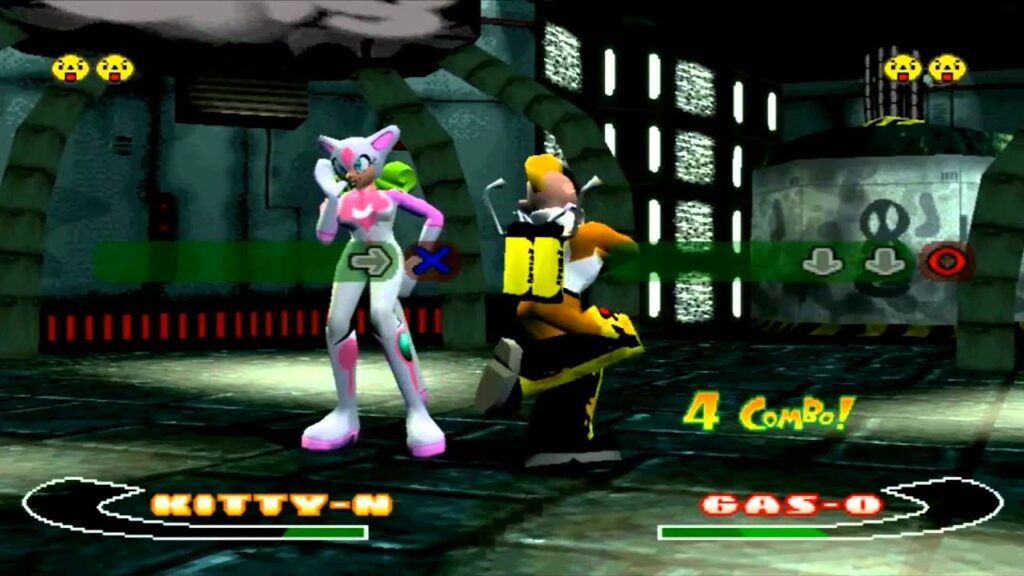 Ready to Bust a Groove?

Yep, I said “groove.” Cuz that’s exactly what you’ll be doing on the classic PlayStation game Bust A Groove.

There aren’t a lot of fight dancing  games out there, but Bust A Groove certainly made a valiant effort.

What is Bust A Groove?

Bust A Groove was a game released in 1998 on the Sony PlayStation. It takes a lot from rhythm-based gameplay and hip hop culture, kind of like pre-Tekken meets the hit rhythm-rap game PaRappa the Rapper. In Japan the franchise was known as Bust A Move, but the name was already taken for the US release of a puzzle series known as Puzzle Bobble in Japan.

The game follows a story, which the player progresses mostly through one-on-one battling.

The game got two sequels, Bust-A-Groove 2, and Dance Summit 2001, the latter of which never saw a release outside of Japan.

How Do You Play Bust A Groove?

Hit every fourth beat landing on an X or an O, and you’ll coast on by, if not, that’s a miss. Every once in a while you’ll get the chance to perform a special attack called a “Jammer,’ which does exactly what it says, “jams” the opponent’s flow.

If you’re on the receiving end, a timely press on the D-pad allows you to somersault out of trouble. Eventually, you get more arrows to press before the fourth beat, and as long as you press them in order and hit that beat, you’re in the clear.

The goal in competitive mode is to get more combos than your opponent.

There’s a solo dance mode, where you get your chance to shine on the floor, and then your opponent gets their turn. In the simultaneous play, you attempt to collect more combos and damage your opponent and their reputation on the dance floor.

If you get a high score, you can initiate “Fever Mode,” a solo dance play mode where you show off your moves.

As with any fighting game, part of the appeal is the roster of diverse characters and corresponding themes and dance styles.

A quick rundown of who’s who:

Gas-O – A 15-year-old break-dancing scientist working for NASA. Skilled in breaking and house dance. His “Jammer” is Gas Chamber

Hamm/Burger Dog – a controversial character due to his racist design, Hamm is a 30-year-old fast-food employee who specializes in Detroit Modern style. His “Jammer” is a Gigantic Hamburger. To avoid controversy in the United States, Hamm’s design was altered from a blackface caricature to a more white-looking appearance.

Heat – a 19-year-old former racer who has the ability to bend fire to his will who specializes in East-Coast hip hop and breakdancing. His “Jammer” is Pyrokinesis.

Hiro – a 20-year-old Disco-loving Playboy who computes by day and dances by night. He specializes in disco style, including flips and His “Jammer” is an autographed photo of himself.

Kelly – A 23-year-old banker who loves dressing up in different outfits who specializes in Modern Jazz with a side of Bump n Grind. Her “Jammer” is a Megaphone

Kitty N –  a TV star who dons a kitty suit to get down, Kitty N specializes in Vogue, Techno Jazz & Funk. Her “Jammer” is Energy Blast.

PinkyDiamond – Yet another unfortunate casualty of racist stereotypes, Pinky Diamond is a fortune-telling contract killer who does hair and stripping on the side. Unlike Hamm, Pinky had no adaptation to her character for US release. Her dance style is 1970s Motown and her “Jammer ” is Tarot Cards.

Shorty/Columbo – a 12-year-old with a ravenous mouse for a sidekick, she specializes in funkadelic and jazz dance. Her Jammer is a “Candy Meteor Shower.”

Strike – a 21-year-old gangster with a serious criminal past who specializes in Gangster style dance. His “Jammer” is Double Handguns

Capoeira – unlockable only on Medium mode, a pair of shiny extraterrestrials visiting earth to create a fan to display an invention called “Groovetron.” Predictably, their dance style is Capoeira and their “Jammer” is Dazing Energy.

Robo-Z – The Final Boss of Bust A Groove, he’s a giant bee-robot-looking enemy who specializes in voguing and African dance. His “Jammer” is Shockwave.

Bust A Groove hasn’t gotten an official remaster, but it’s a popular enough favorite to have been re-released on the PlayStation 3. I say update the troublesome and problematic racial stereotypes to something not terrible, and it’s prime reboot fodder.