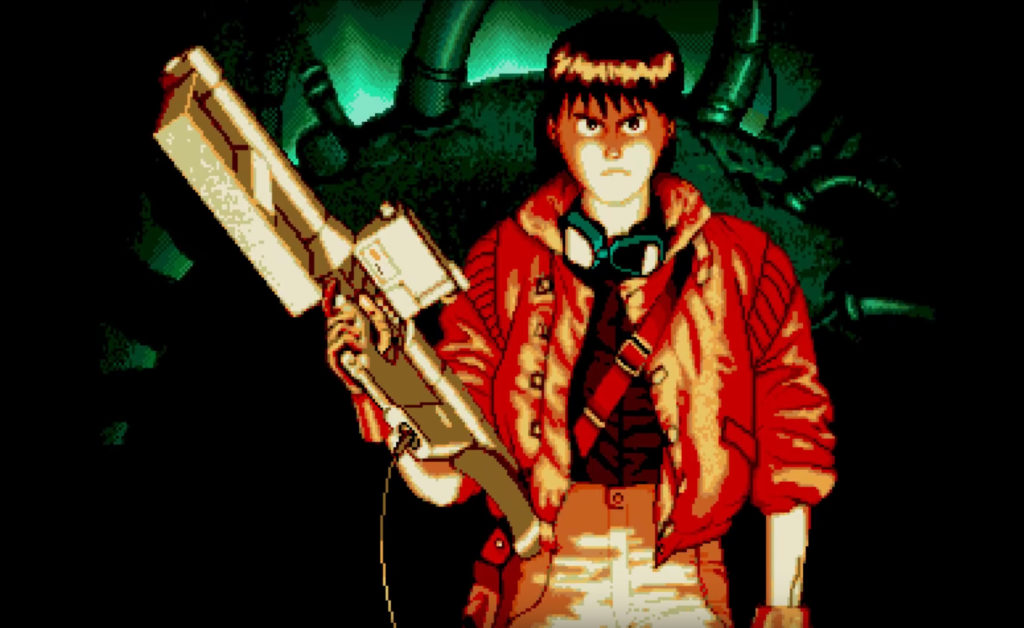 AKIRA is easily one of the most iconic Japanese media properties to be released in the last 40 years. Beginning life as a manga by Katsuhiro Otomo in the pages of Young Magazine, the story would make the leap to animation in 1988 as one of the most brilliantly crafted works ever conceived. It quickly gained international notoriety and began making its way to different multimedia mediums shortly after, including the recently resurrected video game market. While some may know of the Japan-only Famicom game released by Taito the same year the movie was released, most fans are unaware of the several canceled projects slated for other platforms in the early 1990s. One such project which held a significant amount of attention at the time was a title by Black Pearl Software for the Sega Genesis which was actually shown off in playable form at the 1994 Consumer Electronics Show in Las Vegas.

The game shown was an impressive feat at the time, running on multiple engines and faithfully re-creating many iconic scenes from the legendary anime. After a considerable amount of time where the game was being mentioned in gaming magazines around the US, it just disappeared one day never to be found, until now.

As a part of its holiday game coverage for this year, video game prototype wiki Hidden Palace shared with the world a number of never before seen bits of development artwork, assets, and even a running video of a rather far along version of the game that was unearthed. This incomplete, but playable, version of the game features many differences from the CES 94 build, insinuating that it’s from an earlier phase of development. Nonetheless, this version of the game features several different playable stages with a variety of gameplay styles for each along with some impressively animated cutscenes considering the hardware limitations at the time.

The prototype video released (which you can view below) starts off with a digitized version of Geinoh Yamashirogumi’s iconic song “Kaneda” from the film’s soundtrack, with a title screen that shows a 16-bit rendition of a recognizable piece of promotional art for the film. When the gameplay begins we’re greeted with a Hang-On style motorcycle racing stage where you play as Kaneda on his bike speeding towards Neo Tokyo. In the CES build of the game, this stage features enemy characters you’re intended to attack while maneuvering the road, but this early prototype features none.

Stage 2 sees the player taking control of Tetsuo in the hospital where he’s being held after his first psychic episode in the film. The gameplay is in a first-person perspective and the goal is to navigate the halls of the hospital while making nurses and security officers explode with Tetsuo’s power when they appear in your way. Food and pill power-ups are strewn throughout, and the same rendition of “Kaneda” plays in the background. The potential of this particular play-style in the game could have had a ton of application as much of Tetsuo’s story is focused on searching for a way to escape and then later looking for the remains of Akira, the powerful psychic who kicked off the events of the movie and plays a significant role in the original manga.

Stage 3 has the player take control of Kaneda once again but this time it’s a side-scrolling platformer. Out of all of the stages featured in the prototype, this is easily the blandest as it features some pretty unimpressive character sprites, looks like it has some clunky controls, and has a fairly mediocre maze-like level design. This side-scrolling style would also appear again in a later level where the player is controlling Kei & Kaneda as they fly around in one of the hover vehicles featured in the movie, taking out enemies as they traverse the level before taking over as Kaneda again in the same walk-punch-shoot-kick fashion.

Stage 4 puts Tetsuo in the spotlight again, this time with an isometric view where he’s walking the streets of Neo Tokyo and taking out the military getting in his way. This all eventually leads to the final stage, a face-off between Kaneda & Tetsuo in the Olympic stadium which unfortunately is completely unplayable and freezes the game upon access. This battle stage has the same relatively bland character graphics from the previous side-scrolling segment, but as it doesn’t load any real gameplay it’s hard to say how it would have played.

All in all, this is an incredibly impressive feat from a western developer which also had Otomo’s direct blessing when originally entering development. We unfortunately never saw the title as Black Pearl Software merged with THQ while the game was in the works and eventually, both THQ and members of the development team lost interest in the project. It’s a pretty huge shame too as this prototype seems incredibly close to completion all things considered, and even with the uninspired side-scrolling levels, it looked absolutely amazing. I’m beyond impressed at how faithful the majority of it looks, the detailed cutscene animations, and the use of so many play styles is something of a rarity for games of the time. This is something I would have absolutely loved to have played during that particular era, and it’s absolutely awesome that it now has a chance to be preserved so many years later.

A Lightning Fast Dive Into Pulseman