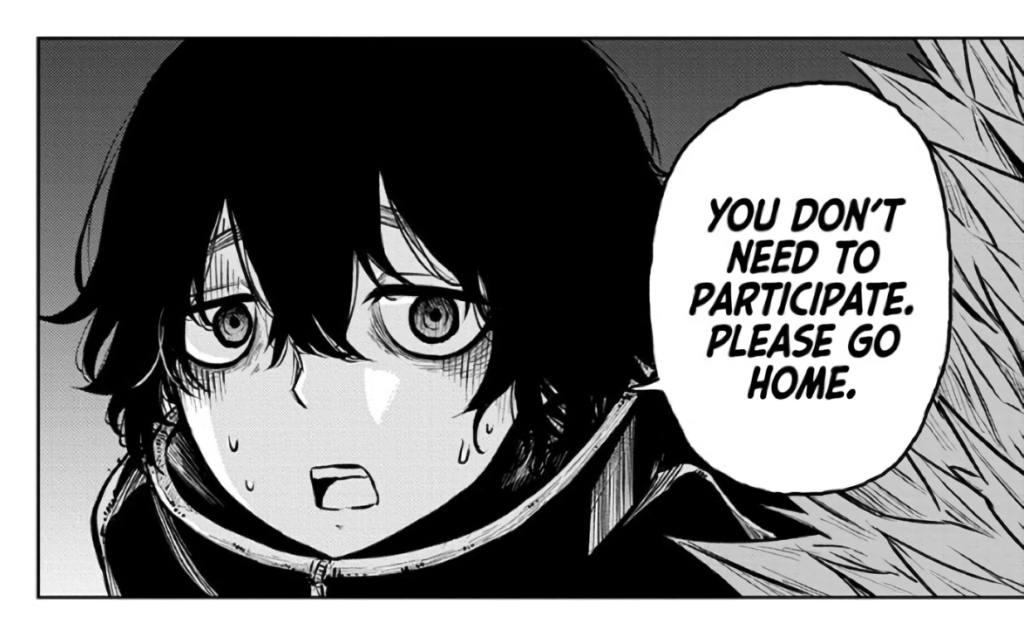 The beginning of a new week can only mean one thing: time for new Weekly Shonen Jump! This is where Jacob investigates the latest and greatest in the magazine, telling you what’s worth your time and what’s not. You can find coverage of other series under the tag Jump Time. Here’s Candy Flurry chapter 6.

Eyes rolled possibly worldwide when Tsumugi declared that she was going to join U.A. Hi- I mean Bord- I mean the Recette Agency back in chapter 3. Nevertheless, Candy Flurry chapter 6 might just overcome this overwhelming sense of déjà vu thanks to an interesting twist on an established formula.

After settling the score with Irie last week, this week’s Candy Flurry chapter 6 sees Tsumugi take on the Recette entrance exam. Presiding over it is Amenai: he seems weak and nervous at first, but quickly reveals his true colors when the agency director’s son enters late. Although you would expect him to give this very important person a pass, he outright refuses. As it turns out, he’s actually pretty strict.

The idea that there is more than meets the eye crops up again in Candy Flurry chapter 6 when the format of the exam is explained. Basically, it requires pairs of examinees to capture each other and earn points on that basis: the first thing that came to mind for me was the Battle Trial arc from all the way back at the beginning of My Hero Academia.

Even so, there’s a twist: any team that captures the reluctantly paired Tsumugi and Umino will not have to take the next test. This is in itself because of Umino’s desperation to take the exam no matter the cost, as well as Amenai’s strict personality. As a result, we have to commend series author Ippon Takegushi for his writing on this one: not only does he play around a lot with first impressions and reader expectations, he also manages to work plot setup into comedy.

If you’re anything like me, then you probably thought that Amenai and Umino’s shtick was just for laughs at first, but then it turns out that this was all meant to set up the reason behind this unique twist on the exam formula!

It’s far too early to say whether Candy Flurry truly is worth reading or not, but one thing’s for sure: I’d be willing to offer a definitive answer if there was more like chapter 6.

You can read Candy Flurry chapter 6 for free via VIZ Media.