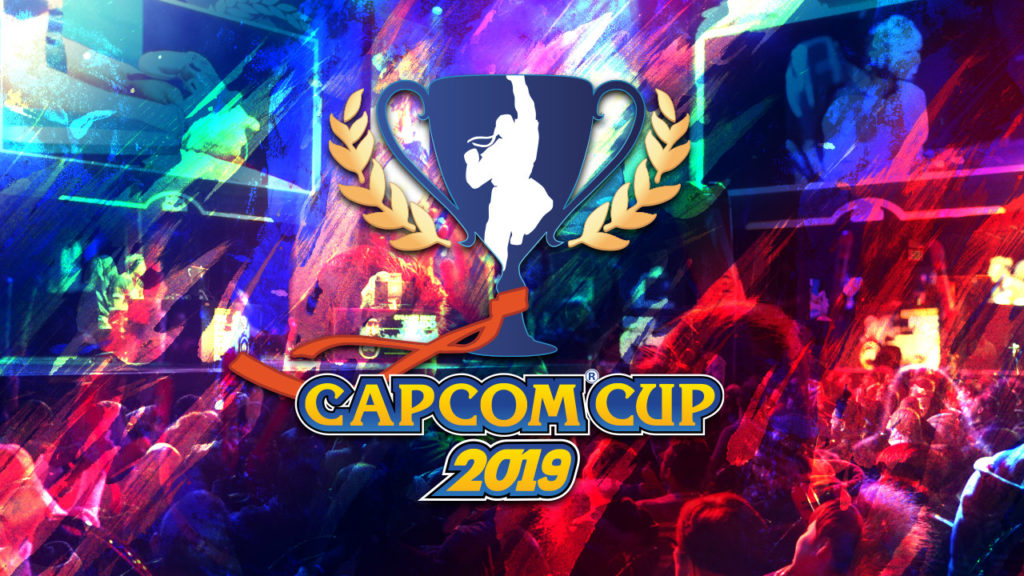 Many different storylines played out during the Sunday finals of Capcom Cup 2019. With a number of players vying for the $250,000 grand prize, there were a number of individuals who had a unique path to the championship. Punk – the most dominant player during this year’s Capcom Pro Tour finished with nearly 5,000 Capcom Tour Points – appeared poised to steamroll his way to the Finals. Appearing with him in the Winner’s Quarter Finals were Problem-X, Fuudo, Oil King, John Takeuchi, Phenom, Mago, and iDom. Meanwhile, in the Loser’s Bracket there were a number of high-level Japanese players, Nemo, Tokido, Machabo, and Last Chance Qualifier, Moke, along with other killers like Luffy, Xian, Infexious, and HotDog29.

Kicking off the days events, Punk continued his march through the Winner’s bracket after taking a solid match against Problem X who scored two matches with his Bison play that Punk had to grind out to win in dramatic fashion, as his critical art didn’t finish Problem X off, leaving him with a magic pixel of health to fight within the final round of the final match. Following that, there would be no more back and forth matches, with Fuudo defeating Oil King in three straight with his tricky Mika. Phenom used Karin to sweep John Takeuchi into Loser’s, taking out Takeuchi’s Rashid. Lastly, iDom demolished Mago with his Laura which would become a recurring theme throughout the day. 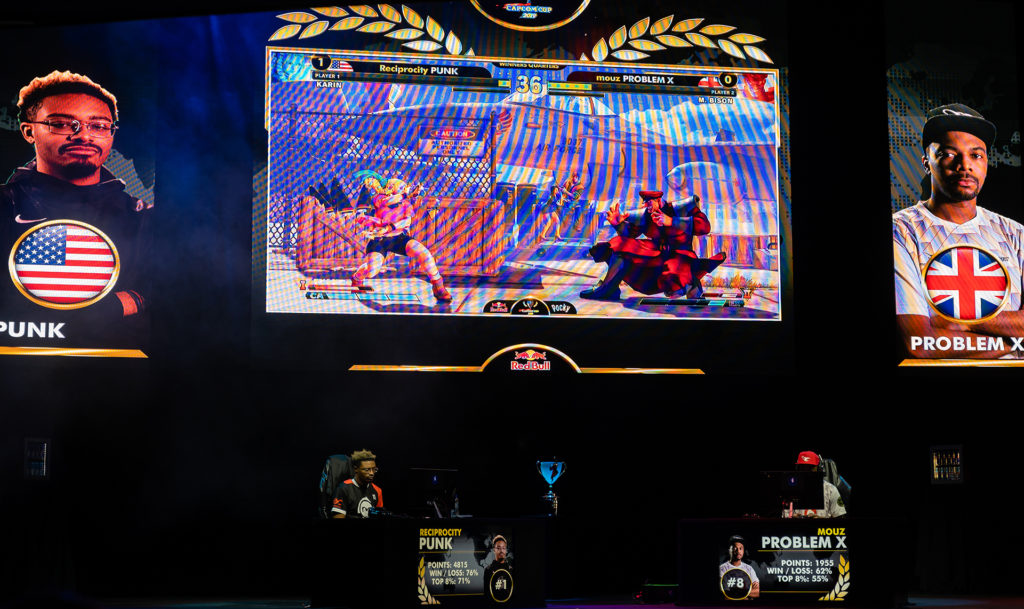 Moving over to Loser’s side, Infexious versus Tokido was going to be the last time we would see Zeku being used for the day, as Tokido ran right over Infexious with his infamous Akuma play. Another high profile match in the Loser’s side, Luffy versus Nemo resulted in Nemo sending Luffy packing with his bullying Urien play which left Luffy fighting from behind in almost every round. HotDog29 versus Xian wound up being a massacre as Xian’s incredibly technical Ibuki kept HotDog29 on lockdown in another three-match sweep. Machabo’s Necalli put an end to the surprise run that Moke made after getting in via the Last Chance Qualifier. The underdog story of Moke was an inspiration to many after his crowdfunded bid to get into Capcom Cup succeeded after a dramatic win on Friday night. From there, Tokido would eliminate Oil King, Nemo booked Problem X a flight back to the UK, Mago sent Xian home, and Machabo defeated John Takeuchi which set the stage for the Top 8.

A brief halftime show featured the Pocky Exhibition. Hosted by Tasty Steve and James Chen, the Pocky Challenge is based on a special build of Street Fighter V which in order to win requires players to defeat their opponent while their health is in the Pocky Chance Zone. Co-host Kenny Omega made an appearance in the challenge, taking on RobTV and in dramatic fashion and actually lost to RobTV despite tying for the same number of Pocky KO’s. Sorry Kenny, but you should have taken the DQ for hitting the home button. RobTV claimed victory and subsequently retired to bring the halftime event to a close. 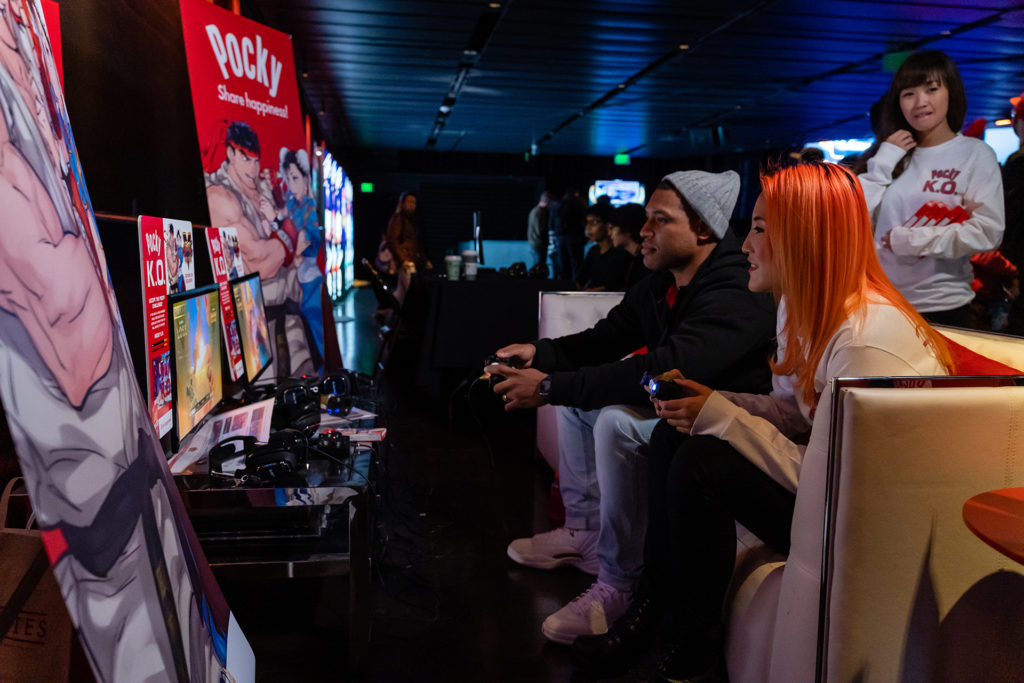 Resuming Capcom Cup and starting Top 8 from the Loser’s Bracket side, an epic match between Tokido and Nemo kicked things off. Tokido’s Akuma, and Nemo’s Urien had plenty of fireballs flying at the start to get things going. Nemo would take the first match, after that Tokido played some masterful defense against Nemo but also pulled off some amazing moves, like doing an EX Shoryuken through Aegis Reflector, and later taking advantage of Nemo’s Aegis Reflectors to setup a fireball trap that Nemo fell for. Next up was Mago versus Machabo, a Karin versus Necalli match-up that seemed to favor the ‘2D God’ as he quickly went up two games to one, appearing completely unfazed after Machabo took a round with a perfect win. Mago then used Karin’s full suite of tools and patience to let Machabo over-commit to wake-up EX attacks that left him wide open for Mago to exploit with an EX attack of his own.

Getting back to the Winner’s Semi-Finals, Punk versus Fuudo was a continuation of Punk’s dominant play, choosing a counter-pick of Chun-Li to take on Fuudo’s pick of Birdie. The range of Chun-Li’s normals just had Fuudo on lockdown for the majority of the first match. In response, Fuudo attempted to switch to R. Mika in match two, but Punk would not be deterred as he had plenty of tools to take care of R. Mika. Fuudo made one more trip to the character selection screen and went back to Birdie, and managed to take one round, but Punk just could not be stopped. The second match of the Winner’s Semi-Finals featured iDom facing off against Phenom, and a win here by iDom would mean two players from the US would face off in the Winner’s Finals. iDom’s familiarity with the Karin match-up would wind up being a factor here. A back and forth match from start to finish, Phenom’s Karin would struggle to take down iDom once his V-Trigger activates. In a dramatic finish, iDom took the win on a round with Perfect, resulting in a huge cheer from the crowd.

Loser’s Quarter-Finals looked absolutely terrifying, Phenom would face Tokido, and Fuudo would take on Mago. Mago versus Fuudo wound up being a very one-sided affair, as Mago’s Cammy just smothered Fuudo and his Birdie. Unfortunately, Fuudo would only get one round in the middle of the second match, and Mago’s Cammy was just too on point to be defeated, moving him to Loser’s Semi-Finals. Phenom versus Tokido also was looking like a quick three and out victory for Tokido, but a clutch switch by Phenom from Karin to Necalli wound up being the difference-maker. At the start, Tokido still looked to be in control, but Necalli’s V-Trigger wound up stymieing Tokido’s offense and Tokido lost in what looked like the most disappointing loss of the night, to a Time Over on the final round in the final match by just a few pixels of health.

Winner’s Finals featured the two remaining American players, Punk and iDom, with Punk’s ‘Alpha’ moniker on display from the get-go, earning a Perfect victory on the very first round of the match. iDom appeared lost in the first game, despite taking down another Karin player in Phenom just minutes earlier. The second and third matches went very much more in iDom’s favor after switching to Poison, as he locked down Punk and converted on a few of Punk’s mistakes. But Punk would make history as the very first number one seeded player to go from the start of the tournament all the way through to take the Winner’s Finals, winning the next two matches and advancing to Grand Finals.

The final player to reach Grand Finals would be either Phenom, iDom, or Mago. First Mago and Phenom would face off in a Karin mirror match that was a slow and tense slog from start to finish. Mago would only take the first match, and then Phenom would go on to sweep him in three straight matches, despite some strong rounds by Mago. Mago would finish in fourth place. Loser’s Finals would be a run-back from Winner’s Semi-Finals, Phenom versus iDom. Phenom looks strong at the start with his Necalli, taking advantage of iDom’s mistakes and making very liberal use of the V-Reversal. But after the first match, iDom would come storming back, using Laura’s three-frame jab to win a round. In a move of desperation, Phenom made the switch to Karin, but it was too little too late and iDom moved on to Grand Finals.

The Grand Finals run-back seemed like a foregone conclusion at the start. Punk quickly took a two-match lead over iDom using his Cammy to stifle iDom and his Laura, but iDom sees some weaknesses and scores a couple of stray rounds in the first two matches. However by the third match, Punk appears to have some execution issues which gave iDom the chance to snatch victory in the third match. Punk made the switch to his mainstay, Karin, but appeared lost once Laura’s V-Trigger activated. iDom would come storming back and reset the bracket after being down two matches. With a reset, we’re back to zero, and now the next player to take three matches would be the winner.

Punk’s decision to stick with Karin didn’t seem to make a difference as iDom’s Laura would continue to dominate, especially when the V-Trigger would activate. iDom’s use of projectiles completely stuffed Punk through the first two matches. Punk would not take a match until the third, which sealed his fate, as iDom made the switch to his final counter-pick, Poison, and iDom, with the crowd behind him, would take out the number-one seeded Punk. 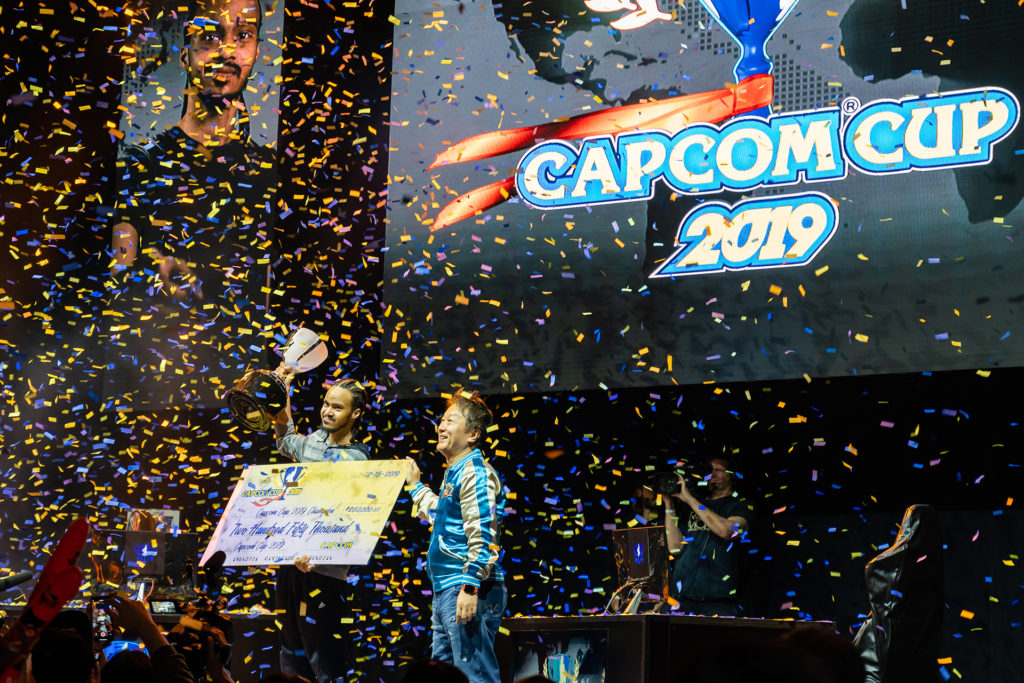 Following the award ceremony, with iDom taking home the $250,000 grand prize, Street Fighter V’s producer, Yoshinori Ono made his expected appearance, only to say that he had no new news for us? Kenny Omega was hearing none of that, laid out Ono-san, and ordered the crew in the back to play the trailer, revealing the return of Street Fighter 4’s main villain, Seth, who’s sporting a new look for Street Fighter V, and looks to have a lot of the same tools and shenanigans that made him a favorite of players like Poongko. In addition to that, a new update has been pushed live to Street Fighter V, unlocking Gill, and V-Skill II for each character in the game.