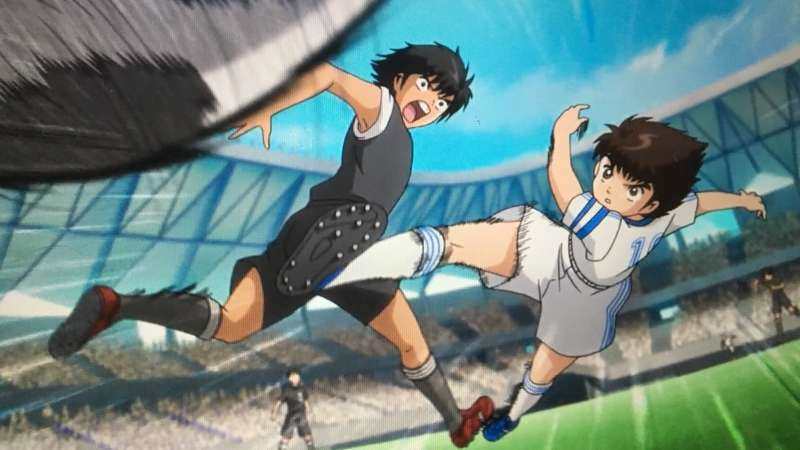 Captain Tsubasa started out in the 80’s, telling the story of young Tsubasa Oozora who has the lofty goal of representing Japan in the FIFA world cup. The original manga, by Yōichi Takahashi, was quickly adapted into a number of different anime series, OVAs, and movies over the following decades.

Then, in 2018 Captain Tsubasa was revamped as a new anime series with Viz Media handling the English language dub.

With four movies, 14 OVAs, and 227 episodes preceding the newest series, the 2018 version of Captain Tsubasa goes back to the beginning. With a total of 52 episodes, the first half of the series covers Tsubasa’s experience in elementary school, while the second half covers the arc of his middle school career.

In 2017 the mobile game Captain Tsubasa Dream Team was released for Android and IoS. Described as “An immersive football simulation game,” gamers can build their team up with various characters, utilizing the special skills exhibited in the anime such as Tsubasa’s famous Drive Shot. Aside from selecting which players are on their team, powering said players up, and competing against other teams, gamers can also play through the story arc of the anime in story mode.

The 2017 game was followed up with another mobile game, Captain Tsubasa ZERO: Miracle Shot in 2018, with a new mobile AR(augmented reality) game, Tsubasa Plus, set to come out in 2020.

Also scheduled for a 2020 release is the forthcoming PS4, PC, and Nintendo Switch game, Captain Tsubasa: Rise of New Champions.

Prior to the more recent video game incarnations of Captain Tsubasa a number of games were released dating as far back as 1992. In fact, prior to 2017 there were 15 different Captain Tsubasa video games. However, not all of these games were available outside of Japan and some that were had their names changed. For instance, the Western Region version of the first one, 1992’s Captain Tsubasa game, was released as Tecmo Cup Soccer Game in the U.S. and Tecmo Cup Football Game in Europe.

Extremely friendly, positive, and driven, titular character Tsubasa Oozora is determined to be a world-class soccer player. With the ultimate goal to play for Japan in the FIFA World Cup, he has a number of powerful techniques (like his “Drive Shot”) and a tendency to make friends due to his warm nature.

Upon moving to Nankatsu, Tsubasa meets Sanae Nakazawa, the pretty chief of the Nankatsu Elementary Cheerleaders. She and Tsubasa end up becoming friends, eventually forming a romantic relationship.

An extremely talented goalkeeper, before Tsubasa showed up, Genzo Wakabayashi tended to alienate his teammates with his cockiness. Forever comparing Japanese soccer to European soccer, it wasn’t until he met his match in Tsubasa that Genzo found someone he could open up to. Through playing with Tsubasa, Genzo was able to find a friend who could help him enjoy being a part of a team.

When Tsubasa first moves to Nankatsu, Ryo Ishizaki is the captain of the soccer team. Not very good at soccer, he and the rest of the team had a lot of room for improvement. Known for being clumsy, Ryo is also an extremely hard worker who trains hard enough to eventually become a great teammate and strategist.

Also known as “Fierce Tiger,” Kojiro Hyuga starts off as a rival to Tsubasa, though the two eventually become friends and teammates. Considered one of the best players, he is an amazing ace striker and is close with teammates Takeshi Sawada and Ken Wakashimazu. To others, he comes across as intimidating, at least to start with.

Known for being gentle and quiet, Taro Misaki was raised by his single father, a landscape painter who moved Taro around a lot as a kid. As a result, Taro didn’t have many friends growing up, forming a friendship with the soccer ball itself.  Aside from being a bit on the timid side, Taro is also optimistic and willing to work hard to achieve his goals. Eventually he and Tsubasa become best friends, earning the nickname of “The Golden Duo.”

Best friends with Kojiro since childhood, Ken Wakashimazu is the second best goalkeeper in Japan. His father runs a karate dojo and this has influenced his style of playing soccer. In fact, this leads to him being known as the “Karate Keeper.”

His father puts a lot of pressure on Ken to take over the family dojo, but comes to an agreement allowing him to pursue his soccer career if his team manages to win. Disciplined and reserved, he’s close friends with Kojiro and Takeshi.

While the plot of the manga spooled out over 37 tankōbon volumes, released from 1981 to 1988, the various anime series, movies, and OVAs broke Tsubasa Oozora’s soccer career into a number of more comprehensive arcs. Following those initial 37 volumes came a variety of sequels as well.

After the Captain Tsubasa J anime, the OVA Captain Tsubasa: Holland Youth was released in1994. This OVA was an adaptation of a manga by the same name that was released in 1993. When the All Japan Youth team suffers a series of losses against the Netherlands Youth team, Tsubasa is reunited with old teammates to win the final game.

In 2001 the series Captain Tsubasa: Road to 2002 was released. The 52 episode anime series was broken into three story arcs. The first: Road to Dream—retells the story covered in the original anime.

The second: Road to Sky—covers the story elements from the Battle of World Youth story arc previously adapted in Captain Tsubasa J.  The third story arc, called Road to Victory, adapts the new material that had just been released in the manga continuation also titled Captain Tsubasa: Road to 2002.

Aside from the rehashing of Tsubasa’s journey from child soccer player to professional athlete, Captain Tsubasa: Road to 2002 also follows his personal life. In the series, Tsubasa has married his childhood friend Sanae.

Then, in 2018, the series was rebooted in honor of the 2018 FIFA World Cup, which was held in Russia. Titled simply Captain Tsubasa, the series has two seasons and consists of 52 episodes total. The first season once again retells Tsubasa’s childhood as first seen in the original manga story arc, Kids’ Dream while the second season follows it up chronologically with the Boys’ Fight story arc.

At the time of Captain Tsubasa’s creation, soccer was hardly on the Japanese cultural landscape. Yet, inspired by the 1978 World Cup, hosted in Argentina, series creator Yōichi Takahashi ultimately changed that. Now, approximately 40 years since Captain Tsubasa’s start, Japan has had six appearances in the World Cup Tournament.

When Captain Tsubasa first began, sumo was Japan’s national sport, baseball was the nation’s most popular sport, and many people had no familiarity with the World Cup, let alone the world of professional soccer. Now, given the series massive success and popularity, real world soccer players—legends of the caliber Tsubasa dreamed of becoming—cite the fictional character as inspirations. Folks such as Hidetoshi Nakata and Fernando Torres talk about how the series fueled their love for the game.

While Nakata’s enthusiasm for Captain Tsubasa might be expected, the fact that Torres, hailing from Spain, also loved the series is potentially surprising. However, due to the anime’s popularity, it was translated to Spanish under the title Oliver y Benji. This led to the show also inspiring the legendary Argentinian soccer player, Lionel Messi.

It only makes sense that a series which has fueled a lasting passion for the sport of soccer, should also fuel the sort of enthusiasm that keeps fans returning to the saga of Captain Tsubasa decade after decade.