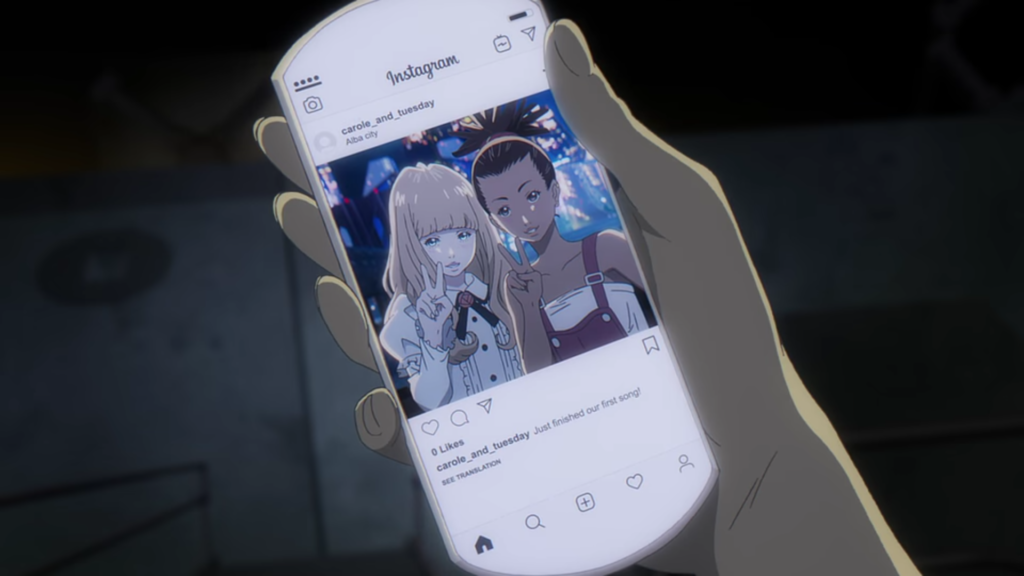 Director Shinichiro Watanabe’s latest anime project Carole & Tuesday has been airing for a couple of weeks now, and although the series’ provision on Netflix is region locked to Japan, for the time being, it’s had a fairly good reception so far. But there’s always room for the show to grow, especially as it continues to air over its planned two cours. That’s where the official Carole & Tuesday Instagram account comes in, which is a brilliant example of viral in-universe marketing.

The existence of an official Instagram account under the username “@carole_and_tuesday” is amazing in itself as this account actually exists in the universe of the show. Titular protagonists Carole and Tuesday created the account under that name in the show after making their first song, following their fateful first meeting. The account’s first post is even the exact one that they made in canon, that being the selfie below.

That first post is, however, the last of the true “canonical” posts on the account. While some of the photos below were taken by characters from the show, we never see them uploaded to Instagram in canon – although it’s entirely plausible that they do so off screen.

The Carole & Tuesday Instagram has been updating with new photos alongside the episodes as they air every week. Therefore, it’s probably best not to look at the account if you’re waiting for the official English subtitles to release, lest you get spoiled.

It’s also worth noting that Instagram does actually exist in the universe of the show. Yes, I mean the actual platform of Instagram appears in the show, logo and all – not some kind of knock-off platform to avoid copyright issues like “Wcdonalds” or “Oogle.” I don’t know what kind of magic the production team was able to perform in order to get Instagram to agree to have their platform be used in the show, but it’s a cool addition that really works in selling the realism of the setting.

Since all the posts are in English, I’d wager that the account is being run by someone on Netflix’s side. That being said, it could equally just be someone who is really good at English at Studio BONES, but I’d like to think that Netflix is taking charge of this one. So many of their original anime don’t get enough exposure or marketing to become the hits that they need to be – I’m thinking mostly of Masaaki Yuasa’s Devilman crybaby which, for all intents and purposes, should’ve had a huge marketing push given the renown of both its source material and director.

I really hope that this type of viral marketing for Carole & Tuesday is proof that Netflix is taking anime produced for their platform a bit more seriously. To show them that you appreciate this, why not give the official Carole & Tuesday Instagram account a follow? As of the time of writing, it’s 20k followers away from 100k, and I’d like to see the account break that number by the end of its first cour at least. We can do that much, right?