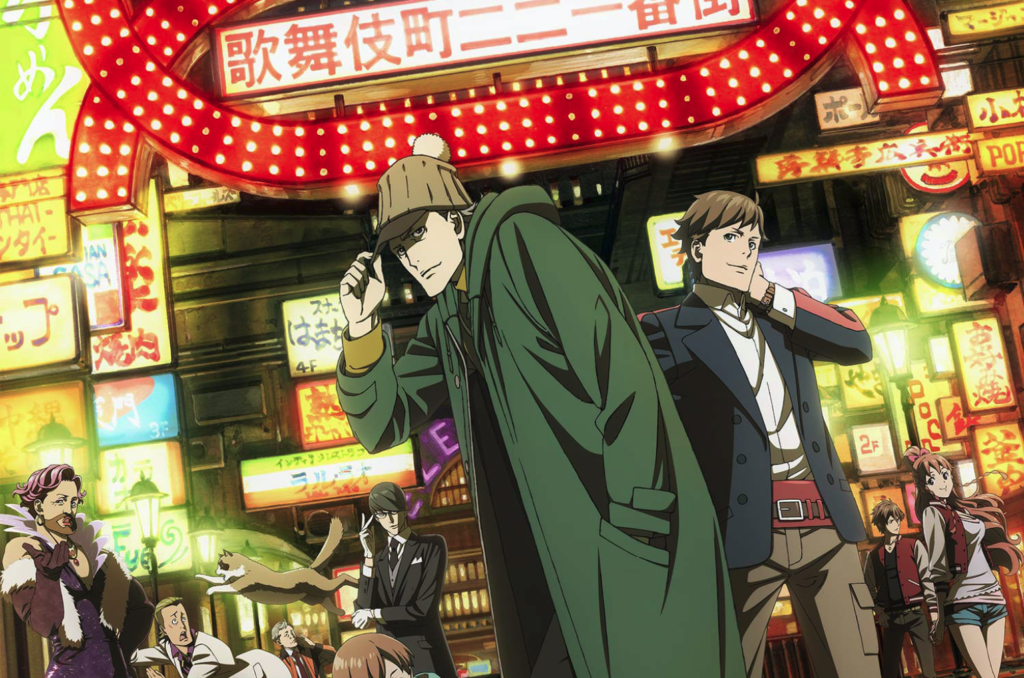 The opening moments of Case File nº221: Kabukicho episode 1 certainly know how to set the scene. Inspired by the classic Sherlock Holmes novels transported to the shadier side of Shinjuku in Kabukicho, the opening certainly sets up a mysterious, almost hard-boiled tone, with a strong solo saxophone playing over a somber piano and violin as a young man walks through the city’s dingy, dirty side streets and alleys. You can almost smell the air of suspicion and mystery in this first minute, as the show immediately sets a tone for itself before a single line of dialogue is even spoken. As far as first impressions go, Case File nº221: Kabukicho really sets you up for a tense and intriguing murder mystery right from the get-go, and certainly put me in a good mood for the show’s debut, especially since it was an original production and not an adaptation. 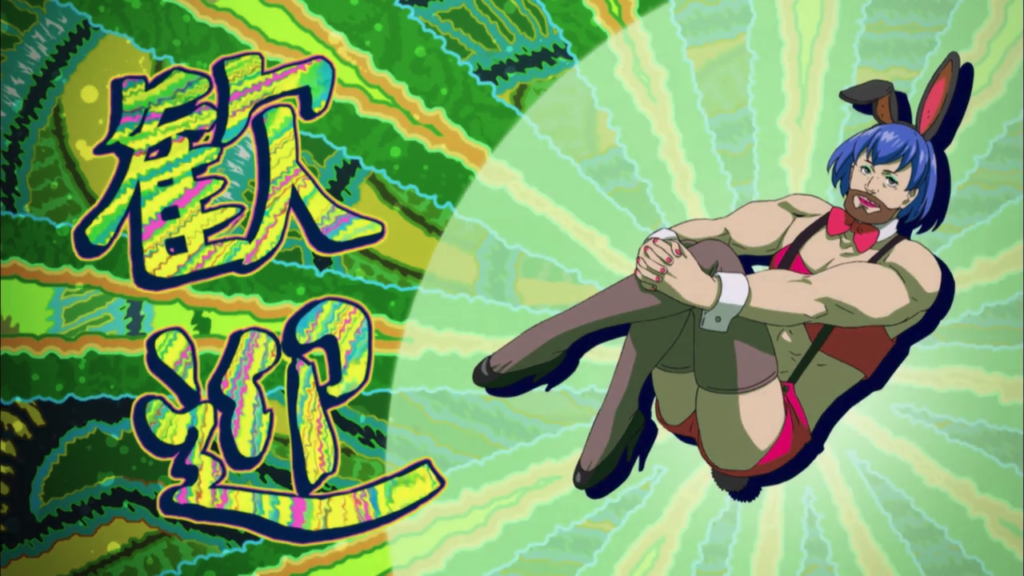 From these opening moments our character finds Bar Pipecat, where a predatory and damaging gay caricature in the bar’s owner, this anime’s interpretation of Mrs Hudson who also shares the name with the character from the original, grinds their crotch against a microphone stand and gropes our unnamed boy (eventually revealed later to be the show’s John Watson) before we’ve even learned their name. This reductive, offensive comedy plays into the idea that gay people are somehow sexual predators and people to be feared and ridiculed in equal measure; a group of people you need to be ‘protected’ from encountering. It’s a stereotype that does immense harm and plays into the demonization of the community that can be seen going back decades, its use here being to make an audience laugh at their expense, while also completely doing away with the show’s suspenseful opening moments from a few minutes earlier. This is then followed by a scene at the back of the bar where multiple inspectors discuss the Jack the Ripper murders and the latest victim in the unsolved case in rather gruesome detail.

As you can see, this show has a tone problem. Worse, it’s not even just here where the show suffers, either, as the pendulum constantly shifts from awkward comic relief to murder scenes and investigations with enough regularity to give you emotional whiplash.

I have to be honest, I’m disappointed in this opening episode. The character of Sherlock himself, when he’s eventually introduced properly at around the episode’s midpoint, shares the intellectual insight that the original has, noticing clues and links that even the most seasoned police also on the case are unable to discover. Watson shows a medical intellect that also helps to solve the case. There is a desire to remain faithful and show respect for the original Sherlock stories here.

Yet, as an audience member, our main characters end up being a source of ridicule, not respect. Watson acts like a timid high-schooler, not an intelligent doctor, making him feel out-of-place. Although Sherlock has always been a bit of an eccentric genius in adaptations of this classic story, the decision to make him a rakugo performer as he deduces and solves cases and unveils the culprit doesn’t make him look clever and instead makes him look crazed. No longer is Sherlock an interesting detective you want to solve mysteries with, he’s an old man who’s thought processes are unclear and his conclusions unintelligible.

The reason these conclusions seem unintelligible is due to Case File nº221: Kabukicho episode 1 committing the cardinal sin of mystery anime. The biggest draw of any detective story is to try and solve a murder by piecing together the clues the show provides you with. You have as much knowledge as the detective of the case, making it just as likely that you could solve the case before the characters of the show were able to. Not only can that help keep audience interest during a show’s quieter moments, but a solution that the audience has no chance of solving can be a frustrating experience for the viewer. Not only does the opening episode fall into this trap, but the show introduces us to the culprit of the murder in the final few moments of the episode, after Sherlock has concluded who the murderer is and detailed how the crime occurred. 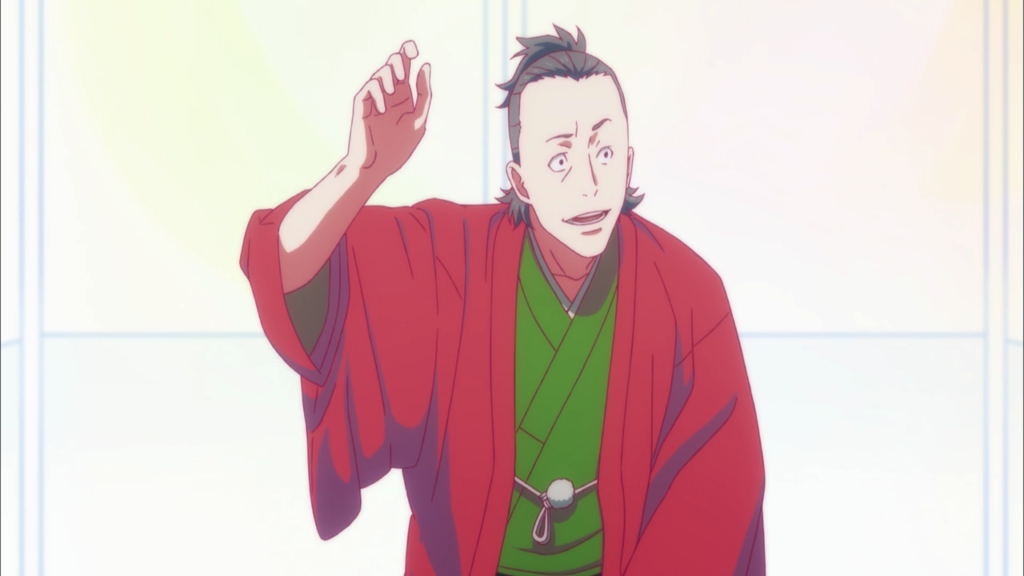 The tone, when the show gets serious, is interesting. It could be understandable to hold out hope that this was simply a case of the anime attempting to do too much at once, the decision to introduce us to new characters and solve a murder within 22 minutes being too demanding a task. As the series develops and a single case can be drawn out over multiple episodes, both viewers and our detectives have more time to solve the case, which has the potential to be a lot more interesting as the show develops.

That’s the issue though. The show has bigger issues than that, issues that go beyond its storytelling. Portraying Mrs. Watson as predatory is exacerbated by another joke made at the expense of two gay lovers later in the episode, where an accusation of murder by a different detective is brushed aside by the realization that the lover they were not supposed to be with wasn’t the victim but another man. The punchline is the two men’s embrace and the disgust on the detective’s face at this, as the show constantly makes LGBT people the butt of the joke on more than one occasion.

While I will continue with this show to see if it improves, I would understand if anyone, upon hearing about how this show handles LGBT issues, chooses to keep away from this anime. It’s off-putting, it’s crass and, worst of all, it’s unnecessary. These scenes that poke fun at marginalized groups don’t add to the plot or mystery at all, existing solely to pad the runtime at their expense. Even if the show does improve in the coming weeks, this opening episode and its treatment of characters such as the likely-recurring character of Mrs. Watson leave the anime’s showrunners with a lot to answer for.