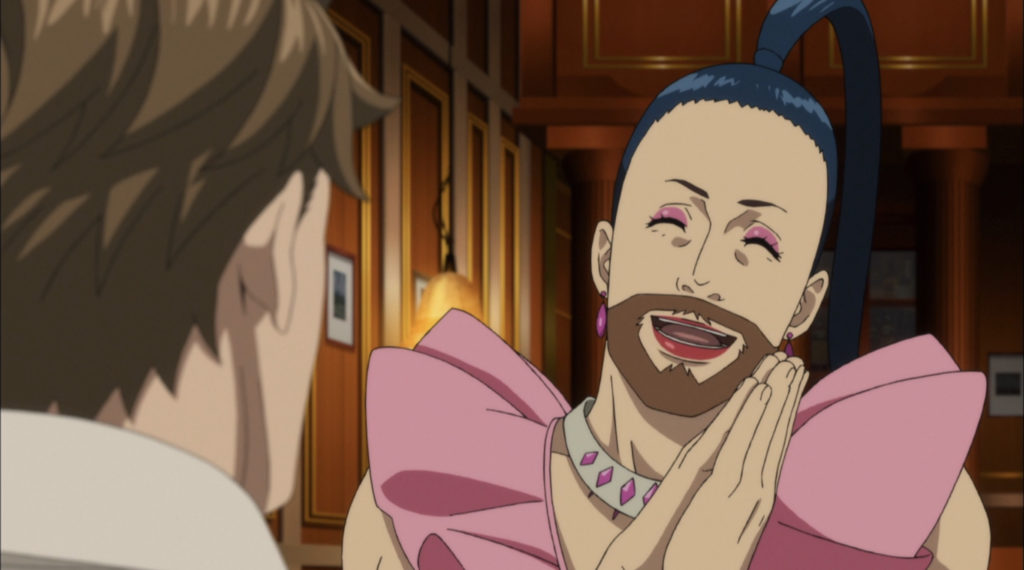 Case File nº221: Kabukicho episode 3 continues with its stylized modern Tokyo take on the classic British detective with a loose adaptation of ‘The Adventure of the Norwood Builder’. In this latest episode, Sherlock Holmes and Doctor Watson have a new case to solve, this time surrounding the death of a man under suspicious circumstances and a surely-guilty suspect protesting their innocence and claiming they were framed. That being said, this mystery will not be the focus of this review, at least not for the most part. I have something else I want to discuss.

This anime would do itself a lot of favors if it learned to contain its flagrant disregard for civility for more than a single episode.

There are a lot of things I want to talk about with this latest episode. I want to discuss its intriguing set-up, with the ways in which it sets up the mystery for the episode through a half-complete explanation of the murder by the prime suspect before they’re taken by the police. The situation immediately suggests there is more to the case than meets the eye yet we find our desire for answers cut short by the authorities, creating a realm of mystique. I like this, and I also wouldn’t mind discussing the brief ending credits sequence that appears to set into motion the establishment of Sherlock’s greatest rival, Moriarty.

I can’t, though. I sit here unable to have a deeper discussion on these elements of the anime because, just like with episode 1, episode 3’s of Case File nº221: Kabukicho and its poor representation of its queer cast overshadows the entire episode. 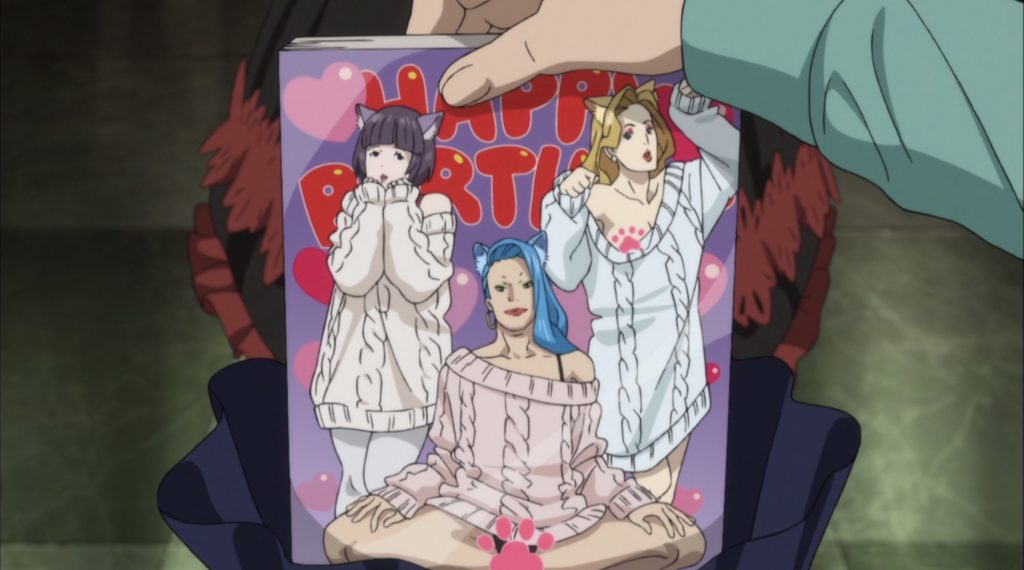 By virtue of the anime’s sole recurring LGBT characters being derogative representations of transgender people and crossdressing men, especially when the anime consistently leans on humor which punches down on such characters through negative portrayals or outright mockery like a crutch, it overshadows the rest of what this show has to offer and leaves a sour taste in the mouth of its viewers. I glossed over this point discussing previous episodes, so I want to give a brief history lesson about crossdressing clubs, particularly those that can be found in Shinjuku where this story takes place, and how they became a safe haven for the LGBT community within the country. It is these clubs which Bar Pipecat takes its inspiration from, after all, and where this anime is both right and wrong with its portrayal of its queer characters.

Entertainment arenas became a safe space for LGBT and queer communities because of how the entertainment sphere within Japan has always been a place for expression of fluid gender and sexual ideas that were maybe less acceptable within the general population of Japan (at least, less acceptable following the Westernisation of the country that occurred during the early Meiji Period in the late 1860s and early 1870s). Indeed, even in early cinematic works, female roles were often performed by male actors, often onnagata performers (men who trained in kabuki theatre to play female roles) such as Teijiro Tachibana, who trained through living in their female roles on- and sometimes off-stage. This idea fell away as women began to hold female roles within movies, yet the home created for crossdressing, effeminate men alongside other members of the LGBT community within the entertainment sphere remained, partially because it was one of the few places where queer people at this time had a place for acceptance.

By the time we reach post-war Japan, visibly queer LGBT people within Japan were often exclusively relegated to the entertainment world, either through the stage and screen or through bar culture, something further cultivated by the use of prostitutes by occupational forces and the lack of strict controls over sexual content in comparison to political content at this time. Visible at this time within Tokyo nightlife was the crossdressing male prostitute, often at the service of paying customers from Tokyo’s streets and from active servicemen, while certain gay bars would consist of male-bodied hostesses who would often serve drinks to customers while making themselves available to customers after-hours for hookups and casual sex.

It was a way for LGBT, in particular, transgender and gender non-conforming, people working at this time to survive, yet an acceptance within such environments and a way to earn money and survive did not represent equal treatment for such people when compared to the general population. Many worked in these places because they found it impossible to get work outside of it because of their identity, while they were at the mercy for potentially unscrupulous customers and ridiculed from those outside of this safe space. Often criminalized by authorities and having their few representations on mainstream media be parodying and demeaning. They also struggled to have their homosexual relationships recognized by officials, an issue that continues to this day for Japan’s gay community, all while ignoring other prominent issues the community commonly faced.

Which brings this tangent back to episode 3 of Case File nº221: Kabukicho. If you’re going to portray the seedy underbelly of Kabukicho and Tokyo more broadly, it’s perhaps inevitable that you need to touch on the Japanese nightlife and portray the safe spaces of queer folk within this. Bar Pipecat is quite clearly a take on the gay bars present within Kabukicho to this day and the people who run it. In reality, it doesn’t necessarily mean that the flamboyant portrayal offered to Mrs. Hudson’s gender-queer crossdressing persona is inaccurate, nor the shady dealings going on at the bar behind the scenes. 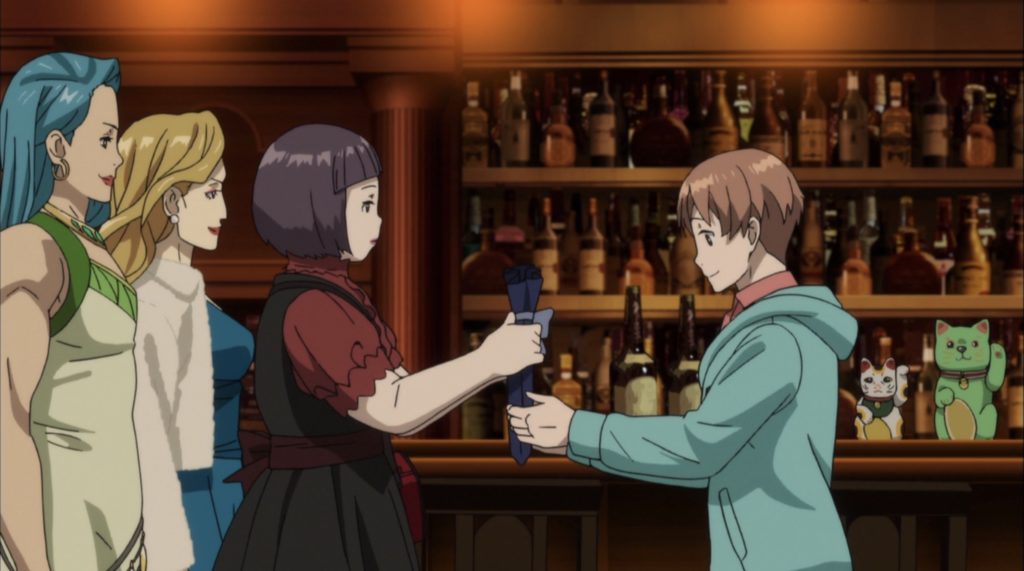 That’s almost beside the point, though, isn’t it. Behind the actions of such people are the socio-economic conditions that forced them into this situation in the first place, and the societal expectations to fulfill a flamboyant stereotype in order to earn a means to survive. Does Mrs. Hudson, or indeed any of the other transgender sex workers who work in their bar, get the well-considered, three-dimensional exploration of their circumstances that allows the audience to understand their situation? No, and without alternative, more fleshed-out queer characters alongside a massive lack of understanding about the legal situation LGBT people within Japan find themselves in, a situation that is certainly improving yet can still lead to family and societal ostracisation for living as one’s true self, representation of queer characters within anime that solely rely on stereotypes feel irresponsible and ill-conceived.

Irrespective of accuracy, the excessive nature of the characterization of people such as Mrs. Hudson, especially within episode 3 of Case File nº221: Kabukicho which is arguably worse than it was during its first episode, is a step too far that demeans and ridicules a queer character simply for who they are. Without a more fleshed-out look at them, and without other queer characters within its cast to show the audience the various faces of the Japanese queer community, it reinforces negative stereotypes and sets the community back. Then again, after episode 1, I’m not entirely confident that further queer representation would do anything other than make the situation this show is in when it comes to this form of representation worse.

Every discussion Mrs. Hudson and the other trans characters within Bar Pipecat have relates to sex. A phonebook with heavy attention on the sexual exploitation of the trans body is used to ‘reel in’ Moriarty for sex. Mrs. Hudson shuts the police up in order to allow the detectives under Bar Pipecat to investigate not just through a cash bribe, but one which is sealed by stuffing the wad of notes down the detective’s crotch, suggestively asking if they can feel this suggestive gesture. 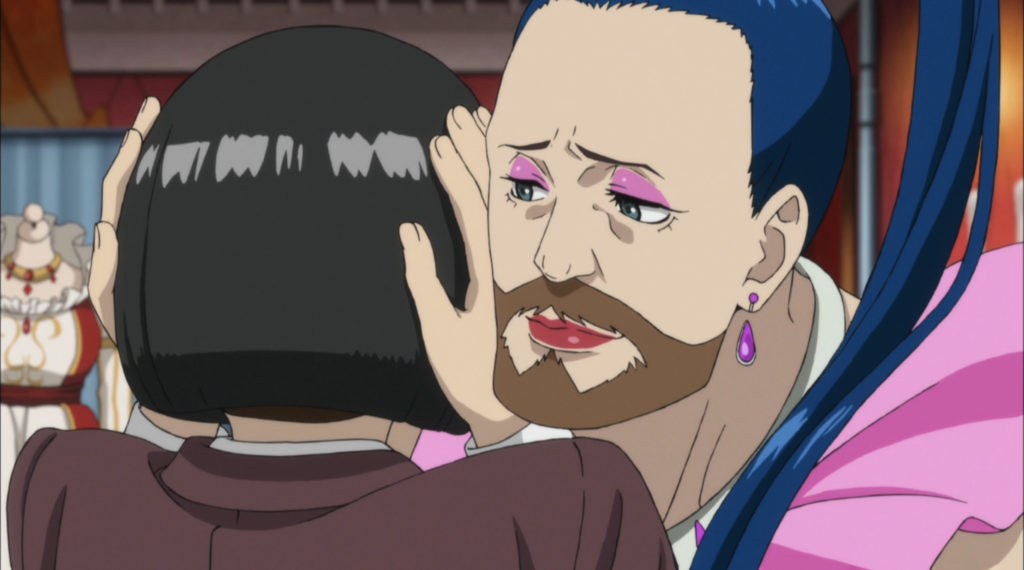 Without another queer character to balance out such representation, without a detailed exploration of their character and situation, these characters become relegated to gags for the audience to laugh at, zoo animals for the audience to gaze upon the exotic and eccentric lifestyles they live. Other characters are also treated as comic relief within the anime, but this comes about due to incompetence, comedic timing, other elements of their personalities. Not here.

I was able to enjoy episode 2 of Case File nº221: Kabukicho because it managed to avoid these issues which plagued its first episode; looking back, perhaps it’s because these characters don’t have the prominence they have in episodes 1 and 3 and therefore there is no opportunity for ridicule.

I want to discuss the mystery elements of this anime, I really do. While far from perfect (it makes its solution a little too easy for the audience to solve), they’re definitely an improvement on the opening episode and could be an element of an intriguing detective anime within any other series structure. Yet my focus is dragged away by the unnecessary need for the anime to punch down, ridiculing those who lack the means to defend themselves without even a plot justification for this unacceptable humour.