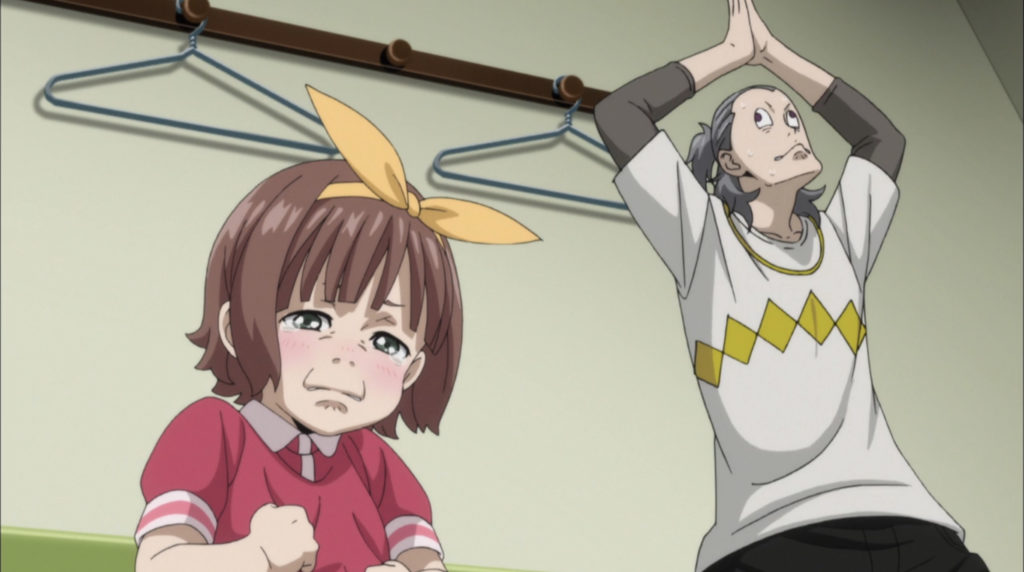 Case File nº221: Kabukicho episode 8 is a showcase of an anime with an identity crisis, full of the traces of good ideas that are scattered, muddled, not fully executed upon. This has been an overriding theme with the anime and has been a sentiment I’ve shared on more than one occasion while writing these weekly reviews for the anime since it premiered in October.

Nowhere is that more apparent than here. The episode lacks a dull moment throughout its runtime this week, yet feels distracted and lost as it tries to cram in many story threads that have previously been left dangling ever since the first episode while failing to give them the attention they deserve to drive the plot forward. 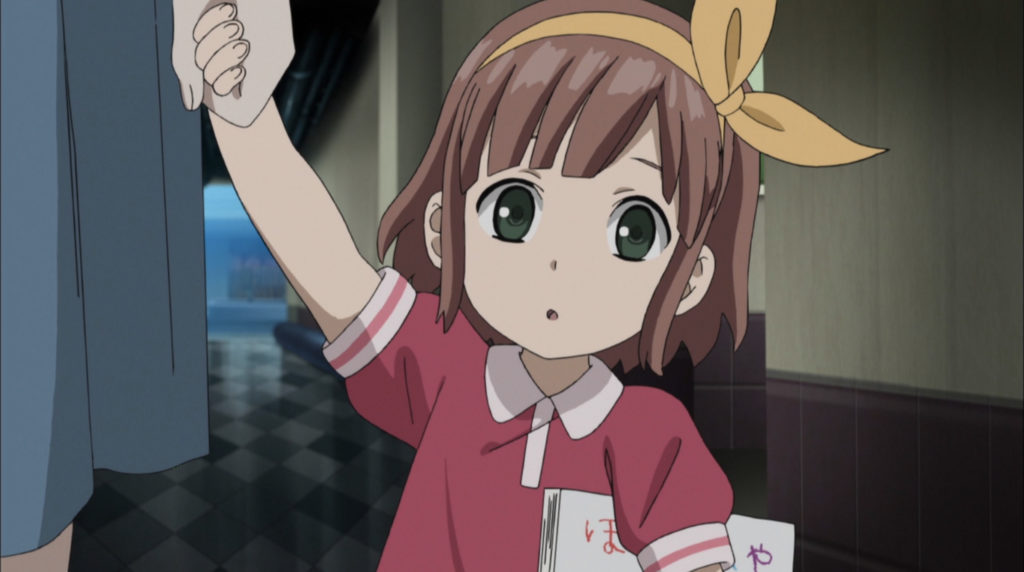 Following neatly on from the last episode, the newly introduced Irene Adler takes center stage for Case File nº221: Kabukicho episode 8, providing much of the forward momentum for the mystery this week while also giving the audience greater insight into the motivations of a character still mostly shrouded in mystery. Irene, for all they were the center of last week’s mystery, shared very little about themselves to Sherlock or the rest of the cast. We know that at the end of last week’s episode they were almost murdered for the contents of the USB drive stolen from Shinjuku mayor Sebastian Moran, yet won’t explain their reasons for stealing it either.

With the contents of the USB drive left unknown without a way to access it, the episode chooses to forgo this plot thread for a story which introduces old friends of Irene’s as she takes the lead in solving a case of attempted kidnapping. Yui Shirota comes to Bar Pipecat with her child and a conundrum: her former husband wants to kidnap their child, threatening her with medical reports in order to comply. Knowing that they can resolve the issue by taking the medical report from them, she arrives at the bar begging them to help her track down her husband and to steal the report back. In his hesitation to involve himself, Sherlock gets left alone at the bar with her child, forcing him to take a back seat to care for the child while Irene and Watson take charge of the case. 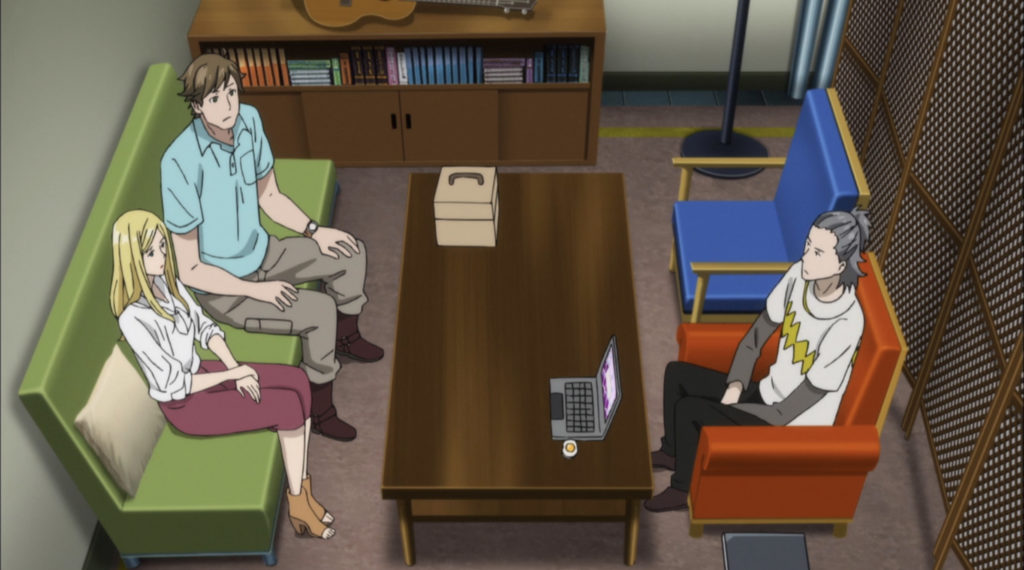 I rather like this dynamic shift for multiple reasons. Despite his frequent appearances, Sherlock has always been portrayed as a distant eccentric we don’t know enough about to make an emotional connection with. This is fine at first, but once we come this far into the series without change it begins to create a disconnect between the audience and events unfolding on screen, something I can only see becoming more of an issue as the story complicates and the stakes ramp up. Sherlock being taken away from detective work to care for a child humanizes the man much more than any intelligent problem-solving has within the series so far, as we see the character bond with the kid and even showing a kind side. The kid warms to Sherlock enough to sleep while she’s with him, while Sherlock begins to like the child enough to give the unusual gift of a rakugo figurine.

In fact, Sherlock only becomes involved in the actual case near its conclusion, and although he helps to tie up certain elements of the case and push things towards their eventual climax, it’s nice to see the majority of the case solved by other characters who haven’t received a spotlight up until now. In many ways, this episode succeeds where episodes 5 and 6 fell flat when it came to fleshing out the anime’s roster of characters by creating an intriguing story that allows the characters to shine. In saying that, the episode does fall flat in some ways near the conclusion, with the case’s conclusion feeling rushed and fanservice moments which feel gratuitous and take away from the seriousness of the situation Sherlock finds himself in at the time it occurs.

There is another side of the episode, however, which is where things become a little messier.

Let’s talk about Jack the Ripper. 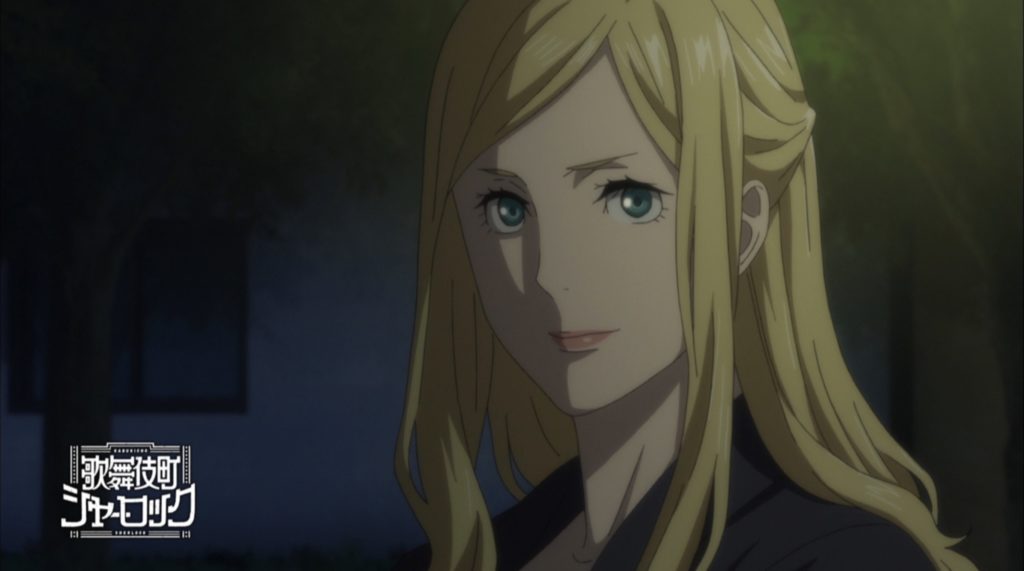 The reason that, in spite of being an adaptation of Sir Arthur Conan Doyle’s original Sherlock Holmes novels in many areas, I would still class Case File nº221: Kabukicho as an original anime production is the case of Jack the Ripper, initially discussed within the anime’s opening episode and once again brought to the surface this week during episode 8. While Sherlock Holmes solved many cases within the original stories, all these cases were at most inspired by and not replicable to real-life cases of the time period within which Conan Doyle was working. Despite being alive during the time of Jack the Ripper, he never wrote a story that tasked Sherlock with solving the unsolved serial murders.

That doesn’t mean the creator never took interest in the case, however. While never officially confirmed, many have speculated the famous author assisted police and possibly even deduced a culprit to the infamous murders. Not only that, despite never appearing in any of Conan Doyle’s stories, the two have clashed enough times in the years since within everything from film to video games to become one of the detective’s most notorious rivals. The link between the two makes sense, placing an unsolvable murder into the hands of the cleverest of detectives, yet it wasn’t a link the original author had intended to make.

With the popularity of stories featuring the two in spite of this, it seemed natural that Case File nº221: Kabukicho would take an interest in portraying the rivalry within its own interpretation of the story, with episode 8 being the first attempt to truly kickstart this story within the anime’s narrative. The issue here is that the idea of tackling this gruesome serial murder has been brought up once before, way back in episode 1, where a copycat killer was responsible for the murder of a sex worker. That case was solved, however, the wider mystery surrounding the true identity of Jack the Ripper was left in the air.

In the episodes which followed, not once was this brought up within the narrative before being thrust into the spotlight this week. A level of intrigue was established within the first episode for a shocking serial murder with a name known by viewers around the world, one which fits perfectly within the shady nightlife of Kabukicho itself. Yet it disregarded this plot to the point where it felt like lost potential, an idea that fit the world that would never be fully explored before being reintroduced at random this week in a way that feels rushed and without thought. 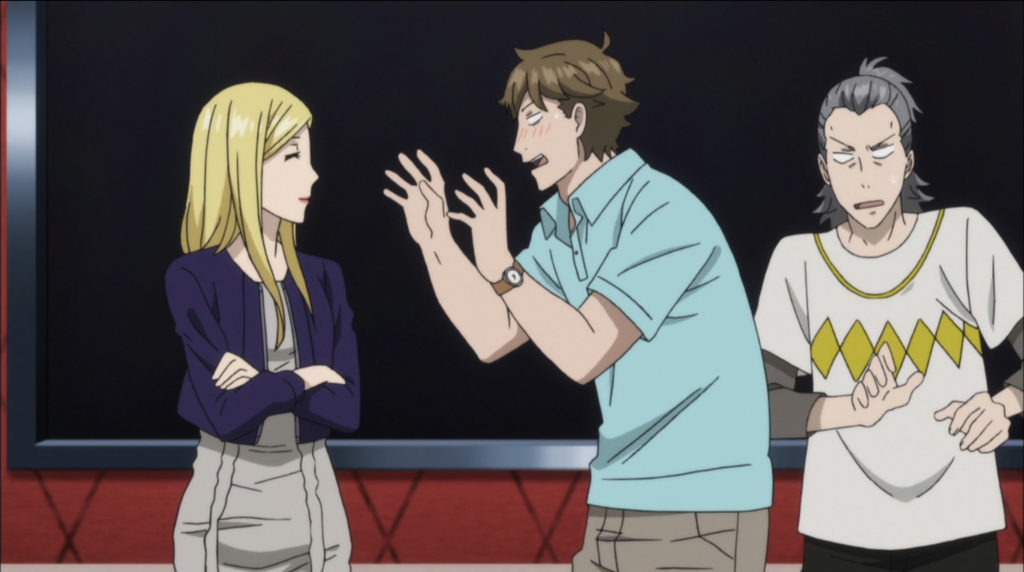 Having faded into irrelevance to the point where its reintroduction brought a moment of shock to proceedings, the episode ends with a teaser suggesting the story will become the sole focus of the anime for the foreseeable future. The reintroduction of Jack comes partially thanks to the introduction of Irene as the latest victim after over 6 months is another person with links to this new character.

Mostly acting as a cliffhanger for what’s to come, it distracts from the impact of an otherwise-decent new episode while overloading the anime’s overarching plot with narrative threads that each lack resolution. With mysteries surrounding the identity of Irene, the Shinjuku mayor, the USB drive and now Jack the Ripper, the anime feels unfocused as this myriad of plot points bounce across the screen without any feeling any closer to a resolution. Detective stories work through leading their audiences on with a mystery they feel they need to know the answer to and fall flat when they’re overloaded with unanswered plot threads that leave a path forward hopelessly uncertain. Unfortunately, Case File nº221: Kabukicho episode 8 seems to be leaning towards the latter. 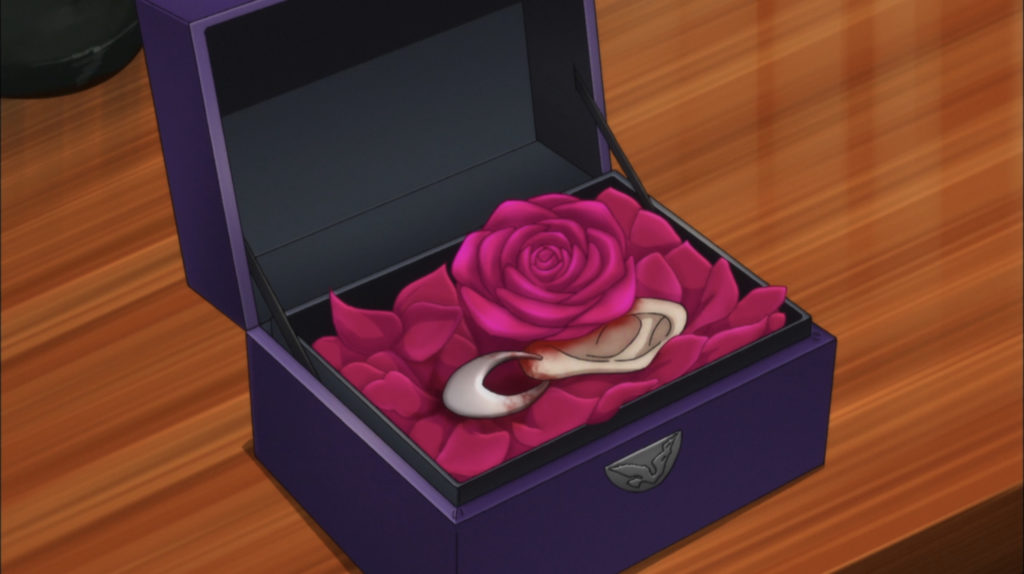 Case File nº221: Kabukicho is now at a crossroads; after 8 episodes it feels like the anime is finally willing to take a step towards creating a wider narrative after dropping breadcrumbs hinting at something more in the weeks prior. We’ve had teases regarding the true nature of Moriarty among other things, yet it’s with the introduction of Irene that the anime has taken a step towards becoming more than a ‘mystery of the week’ compilation.

The question is where the anime goes from here. If it doesn’t quickly resolve at least some of its open plot threads quickly the anime will continue to feel as unfocused as it felt at the end of this most recent episode, dampening the impact of a story arc focusing on the Jack the Ripper murders that seems to be incoming.

What happens next? That’s a mystery that remains unsolved… until next week, that is.