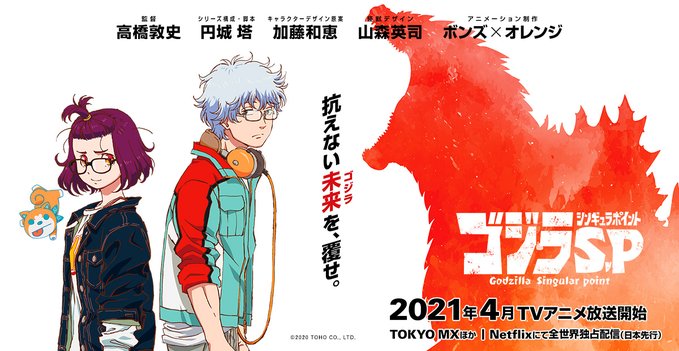 So far, the biggest thing about Netflix’s new anime series Godzilla Singular Point might not be the titular monster, but the huge cast of human characters. The creators of the series introduced the voice actors on Wednesday 9 December.

The two lead protagonists will be Yume Miyamoto as researcher Mei Kamino, and Shoya Ishige as engineer Yun Arikawa. Both characters are described as geniuses. Miyamoto was Rikka in SSSS.GRIDMAN, Trigger’s giant mecha anime series. (Both anime series deal with big, giant things.)

It seems that when Godzilla comes calling, these two will be the ones to take on the challenging and unprecedented threat (with help from the others, of course). Mei is described as a cheerful graduate student who studies ‘non-existent creatures.’ Yun is a genius at robot manufacturing and programming, but he has difficulty dealing with people.

The series is expected to begin in April 2021. Bones (My Hero Academia, Mob Psycho 100, Soul Eater) will do the animation, along with 3D CGI studio Orange. Toho owns the Godzilla franchise.

Shoya Ishige voiced Yusaku Fujiki in Yu-Gi-Oh! Vrains. He stated that he was ‘really happy to be involved’ in the new Godzilla series. She added, ‘I am confident that this Godzilla S.P. will be enjoyable not only for Godzilla fans, but for those who have never seen Godzilla works before.’

Misaki Kuno will play the ‘dog-shaped’ artificial intelligence, Pero 2. She was Hawk in The Seven Deadly Sins, Typhon in Re:Zero, and Abel in Fairy Tail. ‘Since Pero 2 is AI, there are many difficult expressions, such as intelligence and subtleties of emotions, and I always played with all my strength in a series of challenges,’ she stated.

The announced cast will also include: