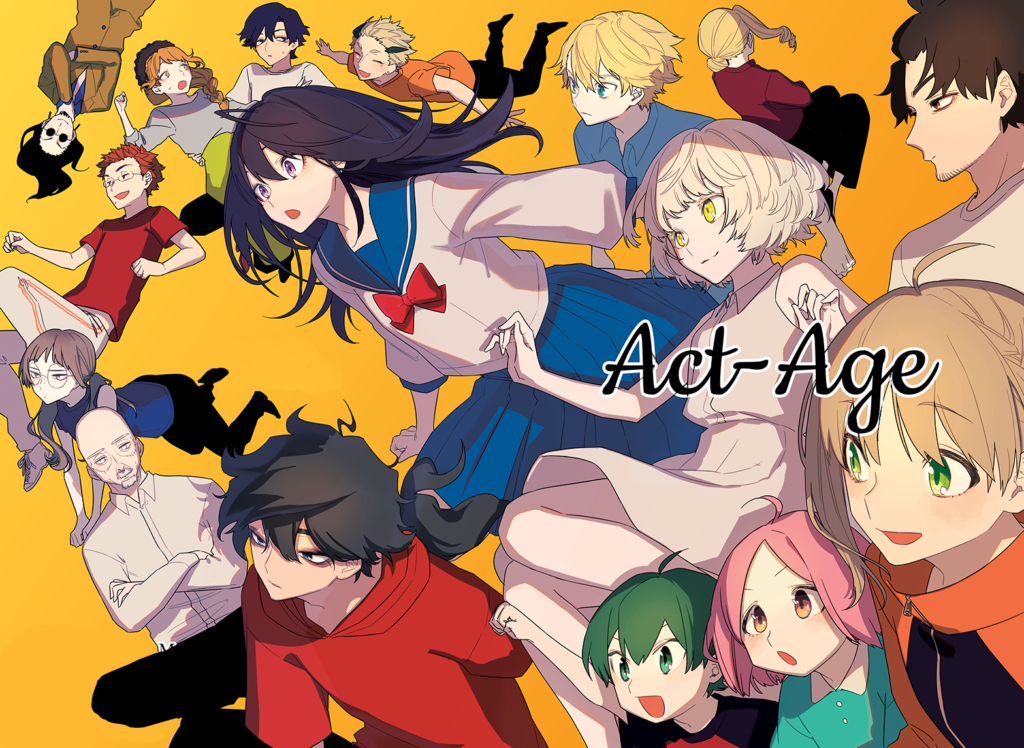 Catching up with Act-Age was a strange experience. In the short time that I have been writing about Japanese pop culture and the manga industry in a professional capacity, I have seen many series come and go: Noah’s Notes, Samurai 8, Yui Kamio… to name but a few. Some of those I have enjoyed, and some of those I have not, but none of those have gone on to become as lauded and as celebrated as Act-Age – apart from, of course, Jujutsu Kaisen, which actually launched around the same time.

Seeing Act-Age go from humble beginnings to being nominated for something like ‘Best Shonen Manga’ at the 2019 Kodansha Manga Awards, then, is a strange feeling. It is probably the closest I will get to a teacher seeing a problem student go on to succeed in life. As such, while the series may still suffer from a significant chapter gap – most of the ‘Death Island’ arc, but also some others – it is still worth checking in with here. Further, as many analysts agree, if any series is going to make a splash from this generation of Weekly Shonen Jump, then it’s Act-Age. Contains spoilers.

Night on the Galactic Railroad: Reaching for the Stars

The reason I am starting with the ‘Night on the Galactic Railroad’ arc is not just because that is where the official English release begins, but also because that is where I began my catching up. Back when I was living in Japan, I had already read most of the Death Island arc as it released, which was what more or less formed the basis of my initial review. But things have changed a lot since then, so it is best that we cover new ground.

Before we begin, it is perhaps useful if we establish what makes Act-Age tick, deep down. It is not just the transformation of the art of acting into a sort of battle manga, in my opinion, but also the series’ character development and storytelling that has allowed it to garner such a passionate fanbase and dedicated following in such a short space of time. As such, I’m going to be referring to these two elements a lot going forward – I hope you’ll forgive.

In any case, the Galactic Railroad arc marks a big step forward for the series in terms of its portrayal of acting. Up until that point, Yonagi had mainly been working for the screen – in some ads, a TV show, a movie – but this arc thrust her into the world of theatre. This added several elements that series author Matsuya Tatsuki could play around with: the interaction with the audience, for one, but also the fact that events are playing out in real time. 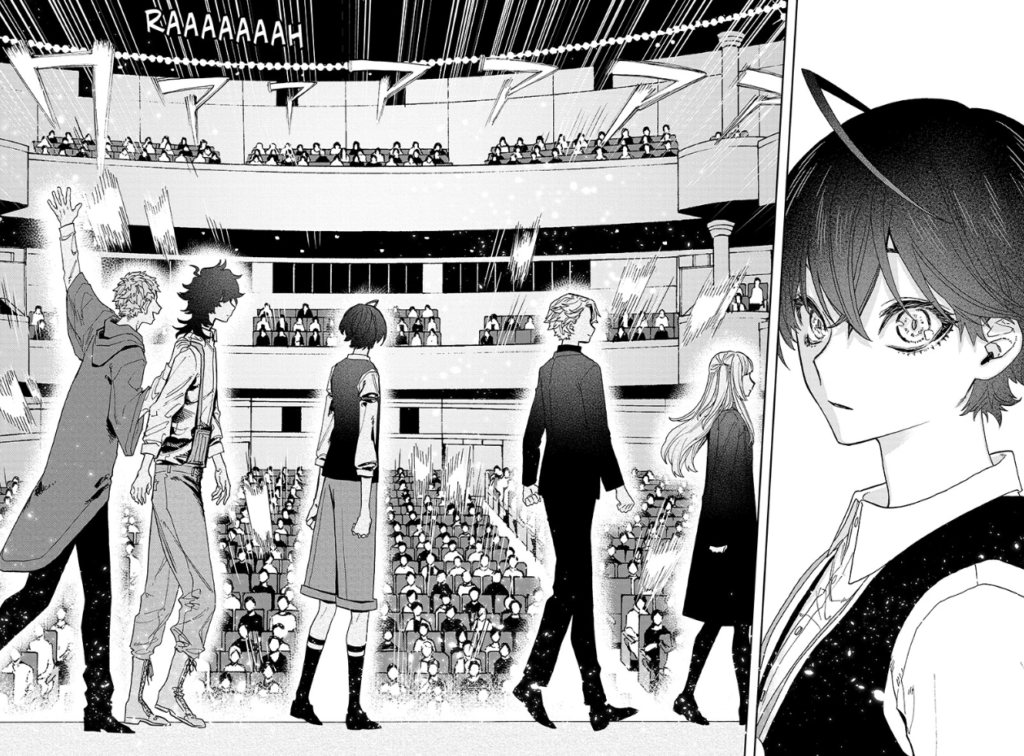 All of these elements are used to great effect during the play, but – much like a real play – it is ultimately the characters that deliver it. Here, we should pay great tribute to the series’ character writing. Some of them had already been established previously, such as Yonagi and Akira, but there were also several new ones: Araya Myoujin, of course, but also Nano, Kametarou, and Iwao. The fact that all of these characters get their time to shine is a testament to the author’s skill, as well as the fact that not one goes to waste.

The big thread that runs through the Galactic Railroad arc is, however, undoubtedly the issue of Iwao’s death. This drops like a bombshell about halfway through the arc, and the shockwaves never quite stop reverberating: Yonagi is forced to keep it a secret up until the moment of the play’s premiere, whereafter she is forced to take on the role of Iwao both for the sake of the play and the group’s dynamic. The way that this perfectly threads through the narrative and our character’s journeys is hard to describe, and really does deserve to be seen to be believed.

If we continue on the theme of theatre, then the Cinema Club arc is like the interval you get partway through a stage play – partly to let the audience recover, but also to allow the actors to go and get changed. The only problem is that, unlike the theatre, the audience can’t pop out to go and get an ice cream or a glass of wine – we’re stuck reading it, which makes its flaws that much more obvious. 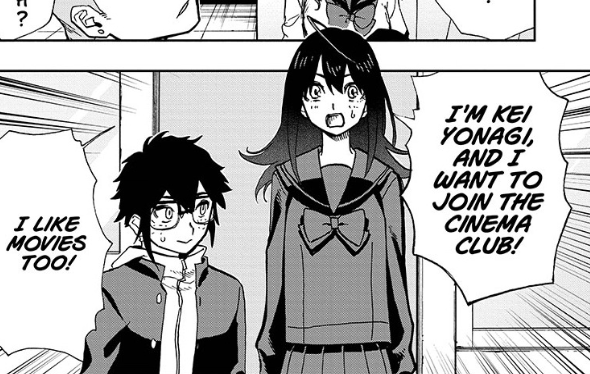 The Cinema Club arc does, undoubtedly, have its place. For one, it explores the consequences of Yonagi’s fame and her character development: in particular, the film that she produces alongside her newfound friends serves to highlight how much she has changed over the years. Those school friends have also, in turn, turned up a lot in subsequent arcs, acting as Yonagi’s rock in times of strife.

Nevertheless, the Cinema Club does feel a little stunted due to how short it is. Yonagi achieves her goals relatively quickly, and some characters are left by the wayside – in particular Ryoma, whose relationship with Hina is never quite explored. I’m not sure if it would have been wise to elongate it – especially considering what comes after – but it definitely feels a little inconsequential as a result.

Princess Iron Fan: Through the Fire and Flames

Luckily, Act-Age’s next arc is one of its best. In fact, it may be one of my favorite arcs in the whole of shonen manga since Hunter x Hunter’s Chimera Ant. It’s that good.

The secret of the Princess Iron Fan arc comes in the way that it so masterfully weaves together narrative progression and character development. In this sense, not only is the concept for the arc enthralling – two teams performing the same play in a bid to outdo each other – the conflict between the characters and the lengths to which they will go to achieve their goals is what pushes it even further beyond. It has been rightfully lauded and celebrated by fans, and will go down as one of the best arcs of this generation.

First of all, we should tackle some of the new characters that are introduced for this arc. The one that makes the biggest initial impression is no doubt Riku Ogami, the actor who abandoned the Stars talent agency and turned his back on Japan. His role is that of an instigator, although he becomes less important as the arc goes on. There is also Sou Shiraishi, whose backstory is firmly interwoven with Ogami’s and plays an important role at the arc’s climax. Takemitsu Karasuyama also makes a return from the Death Island arc, struggling to find his place among his peers. 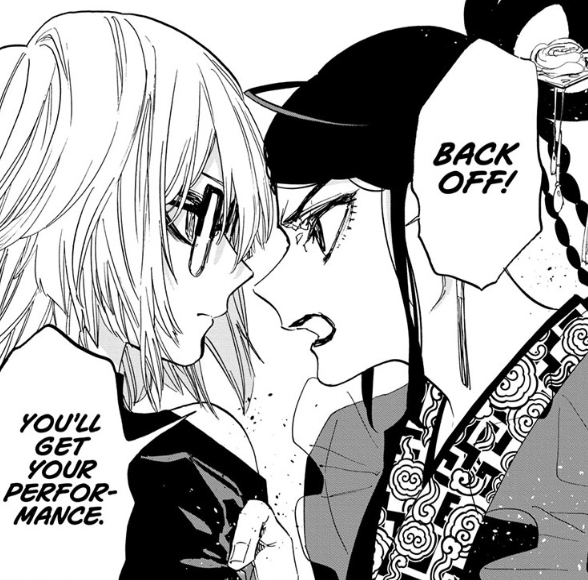 The most important character, however, is undoubtedly Hanako Yamanoue. Not only is she the author of the original novel and the director for Yonagi’s team, her hidden past is what propels the actress and the series to new heights. Feeding into that is the conflict between some of our established characters: Takemitsu and Yonagi, yes, but also Chiyoko and Yonagi.

Unfortunately, not much more can be said without spoiling the events of the arc, but I will say this: the Princess Iron Fan arc develops in such ways that, at times, it was able to take my breath away. It is usually very rare that I have a visceral emotional reaction to a manga series, but there were several moments during this part of Act-Age that I had to physically stop reading in order to gather my emotions. Truly, it has to be seen to be believed. 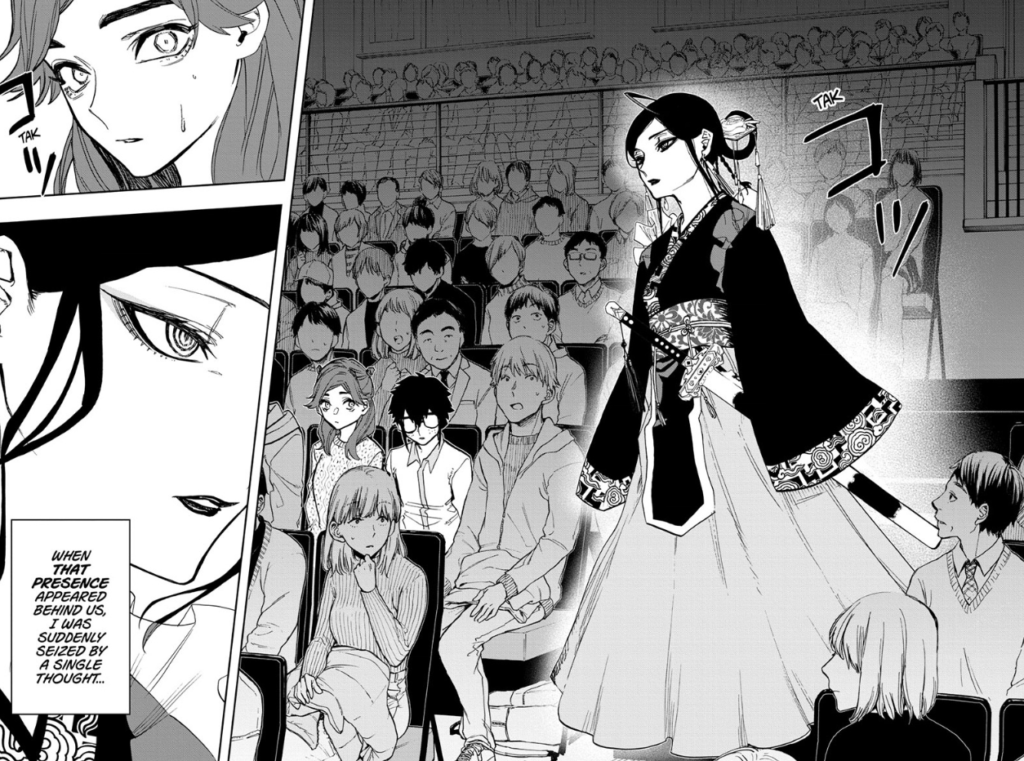 Returning to the secrets of the series’ success, it seems clear to me that Act-Age builds on its initial strengths – transforming acting into battle and effective character storytelling – by combining the two and making them nearly indistinguishable from each other. When Yonagi manages to clear one of the hurdles presented by the play, we rejoice not just because the narrative goals have been cleared, but also because her internal conflict is resolved. Similarly, when she fails, our hearts drop because both the narrative and her development cannot progress.

One of the only drawbacks to this arc is the fact that it lacks a proper conclusion. A lot of time is spent exploring Yonagi’s portrayal of the character and the troubles that her team faces, but Chiyoko and her team only get a fraction of that time. True, the time that we do have with them is well spent – it is especially satisfying to see the ‘Angel’ reconsider her philosophy and approach to acting – but I can’t help but feel like more could have been done. Making matters worse is the fact that several statements are made which suggest that Yonagi’s team might be able to stage a counterattack, but these never materialise. As a result, it ends in a confused way – I was hardly aware that I was at the end when the arc does end.

TV Drama and the Future of Act-Age

Nevertheless, all these drawbacks do is drag the last completed Act-Age arc down from perfection to near-perfection. Looking ahead, there’s also still so much more to look forward to: the series’ latest, ‘TV Drama’ arc sees Yonagi head back to the screen after some time on the stage, only this time with much more experience and renewed confidence. We’re also seeing some of the story’s overall plot threads converge and come into view: Kuroyama’s masterpiece, for one, but also Yonagi’s takeover of the entertainment world. Soon, everyone will know her name.

As of the time of writing, there are 161 chapters of Act-Age published. While some of them aren’t yet available in English, most of them are available to read for free via VIZ Media’s Shonen Jump.

That is honestly a strange statement to make. Back when I read the first chapter of the series in 2018, I honestly wasn’t sure if it would manage to stick around in the long-term. Sure, I enjoyed it, but the world of Weekly Shonen Jump is a cutthroat place. Series and authors come and go – no matter how much you may like them. 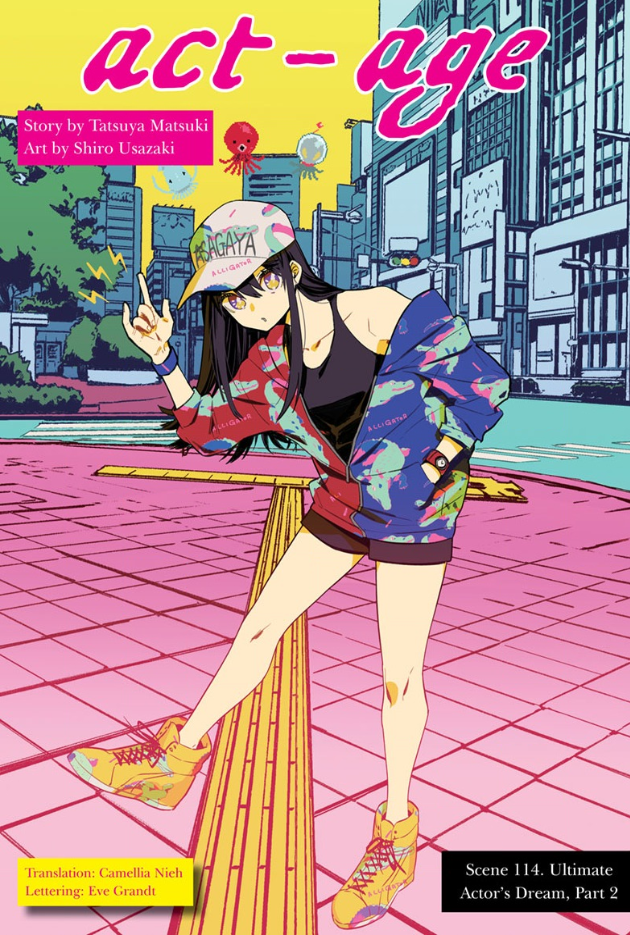 Nevertheless, Act-Age has secured for itself a strong place within the shonen magazine. Part of this is no doubt because it is simply so different to everything else, but as this piece hopefully highlights, this is also because of its inherent strengths. We can attribute most of this to the incredible work of series author Tatsuya Matsuki, but credit should also be given to Shiro Usazaki for her incredible, pitch-perfect artwork.

But after the rise must come the fall. While Act-Age is relatively light-hearted, that is what the ancient Greek masters of drama taught us, all those millenia ago. If I were to make a prediction as to how the story will develop in the future, then the nefarious presence of the promoter Shinichi Amaichi might be instrumental: what exactly his plans are still remains a mystery.

In any case, it seems unlikely that Act-Age will be going anywhere in the near future. Sitting on a cool 3 million volume sales and several awards, Tatsuya Matsuki and Shiro Usazaki’s acting series is undoubtedly one of Weekly Shonen Jump’s fastest rising stars. Anime soon? Maybe.