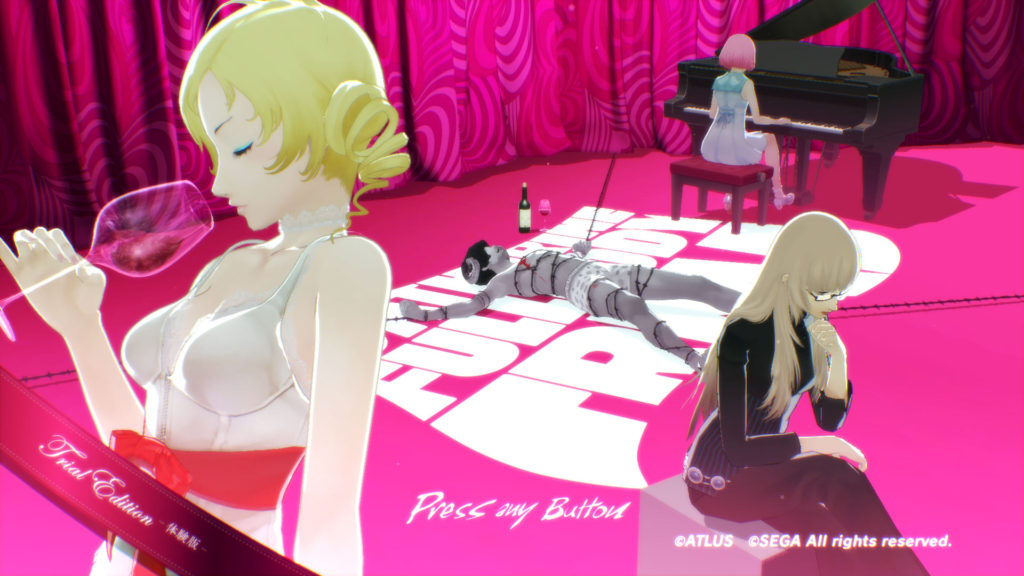 The release of Catherine Full Body in Japan on PlayStation 4 and PlayStation Vita is just a month away, with the game set for release on Valentine’s Day in its home country. While it would seem there would be little else to share about this game with so little time left until the game’s release, Atlus did share a few new bits of information during a special livestream last night, where the announcement of a trial version was made alongside the reveal of a theme song made by popular Japanese music group Sekai no Owari.

The trial version is available now on the PlayStation Store and gives players access to roughly the first 30 minutes of the game, allowing players to be introduced to the game’s story and evolved mechanics when compared to the original release. The introduction of a new character in Rin would inevitably lead to many story segments and the story’s overall structure being massively altered and there are hints at some of these changes within the introduction previewed here.

To coincide with this was the reveal of the game’s theme song alongside a brand new promotional video showing off the game’s cutscenes. The song is a newly-produced track specially made for this title called “Re:Set” by Sekai no Owari. While I’m usually a fan of the group’s music I have to admit I’m more mixed on this track in general, although with much of the track drowned out by the voiceover I’d want to hear it on its own to make a full judgment. The group also produced a special message to coincide with this reveal.

The game is set for release in Japan on February 14 with a Western release confirmed but not yet dated, but confirmed for 2019. If you can’t wait, a recently-released PC version of the original game without the new additions included in Full Body is available now.