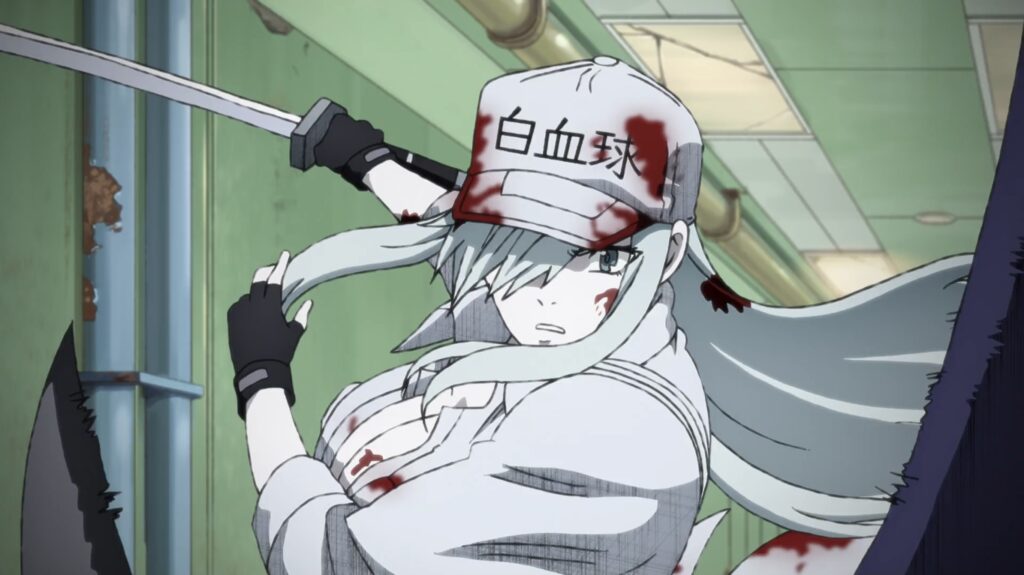 The return of the Cells at Work anime after three years is welcome. The first season of the anime was a surprising, fun dive into the human body, pseudo-educational but more entertaining in how it anthropomorphized body cells and functions into a living, breathing society with engaging characters. The choices made when reimagining cells were well-considered too; it feels obvious that Platelets should be kindergartners and Red Blood Cells, charged with transporting oxygen, be delivery workers.

Over the course of 13 episodes and a fun OVA special, Cells at Work took action anime and manga tropes and put them on the human body, imagining disease as the enemy in a fight against monsters in the hall of this new society. To say I was excited for the series to return this season is an understatement, but its return is an unusual one. Mainly because we aren’t just seeing the anime return with one new season… it returns with two! 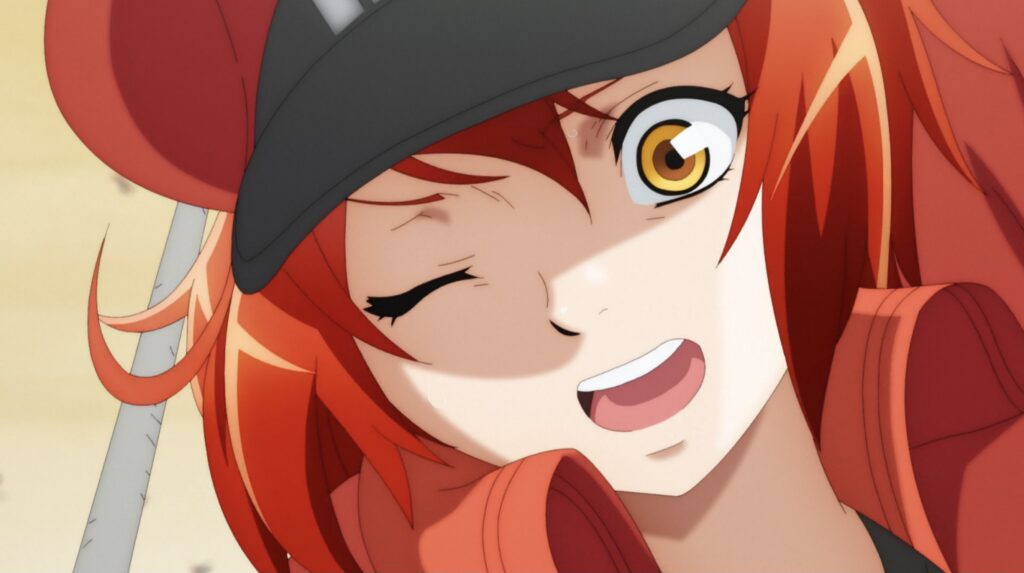 Cells at Work season 2, that continues the story of the Red Blood Cell and White Blood Cell inside the relatively healthy human body of the first show, makes a return alongside a new anime, Cells at Work: Black. Based on the spin-off manga of the same name, Cells at Work: Black tells the same story in far more dire circumstances. The body in question this time is ravaged by the effects of smoking, alcohol, and life excesses, allowing germs to run rampant and creating a trail of bloody destruction and overworked cells.

The shows couldn’t be more different interpretations on the same concept, but their simultaneous airing schedule compliments one another rather well. In fact, I’d go as far as to argue both Cells at Work anime benefit from airing alongside one another, and rather than overloading on the concept by returning with two series at the time, both anime benefit from this decision to air simultaneously. 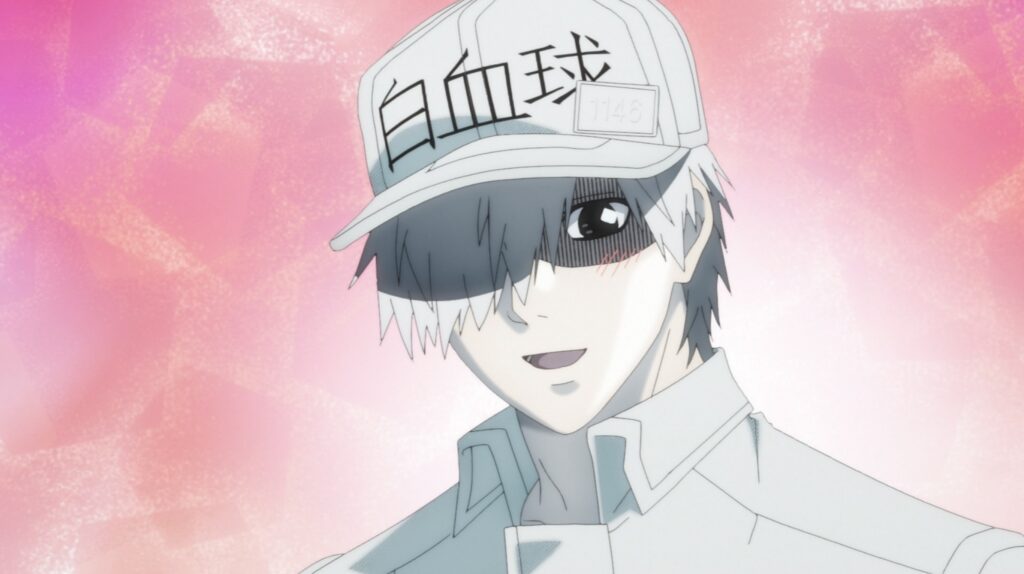 As a result of being an episodic return of a show we’ve seen before, Cells at Work season 2 is an enjoyable yet familiar return for the series with relatively little worth discussing.

This first episode is relatively low key as it centers on White Blood Cell and one of the Platelets. The soft heart to the cold exterior of White Blood Cell is what makes the concept work, as the episode focuses on Backwards Cap’s insecurity and issues pulling off their work due to a lack of strength. They let the other Platelets down for their inability to clump, but want to try harder and do better and deliver more for the team.

The comedy comes in by seeing White Blood Cell cheering on Platelet from the sidelines and unable to contain their adorable determination. The innocence of the Platelets were always a highlight whenever they showed up in season 1, so seeing them fight with rigor on the promise of a medal from their mentor Magakaryocte, a wonderful interpretation of the cell producing Platelets, is fun as they fix internal bleeding with new clotting techniques. 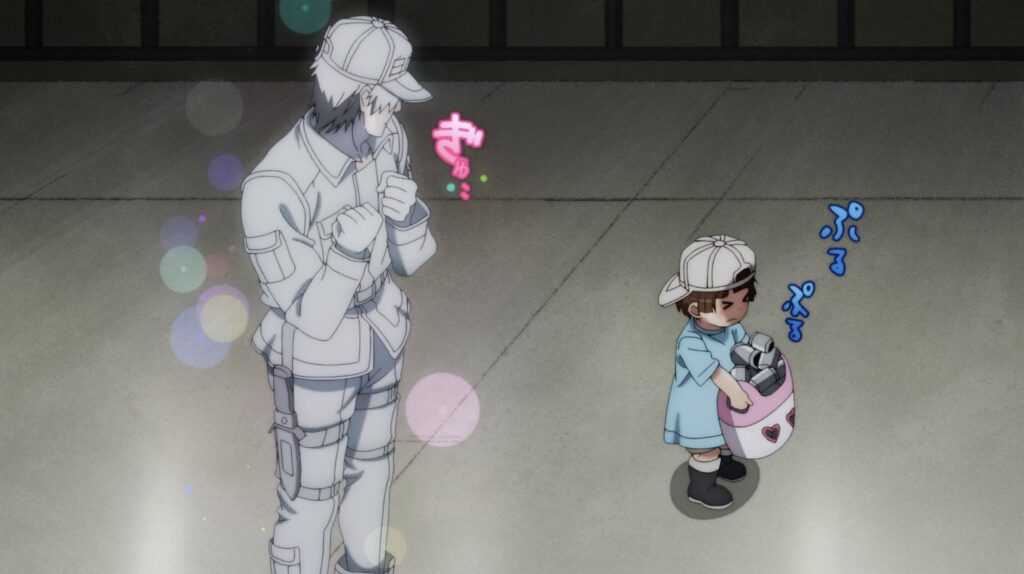 Thing is, other than that, there’s very little I have to say about the return of the Cells at Work anime in isolation. It delivers everything in an enjoyable matter and left me wanting more, but it doesn’t radically alter the formula.

That’s where Cells at Work: Black comes in.

This show couldn’t be more removed from the jovial atmosphere of its parent show. It opens on the dead bodies of Red Blood Cells scattered everywhere as germs run rampant in dirty corridors. The art style is different too, rejecting the more rounded, inviting character designs of the other cells for sharper outlines and more realistic features that emphasize the darkness and danger of this unfamiliar body.

Cells at Work: Black centers itself on a body ravaged by excess. Smoking, overeating, and alcoholism have put the body into a state of disrepair that the cells can’t even keep up, and all have become hardened by the non-stop war of daily life. Platelets aren’t bubbly kindergartners but hardened junior high students with an attitude (wearing the same outfits) due to evoking cold from trauma. White Blood Cells and Killer T Cells are stronger due to having more experience, but the Red Blood Cells are angry as their thankless job gets harder and harder. 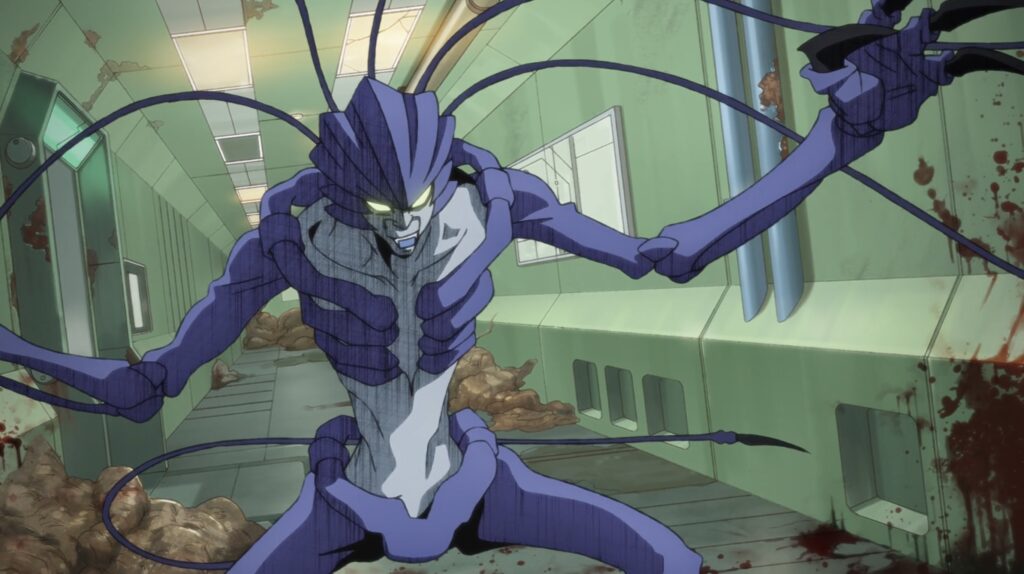 This darker tone covers more than just the dangers of the body, impacting its subject matter in equal tone. The series opens far differently by centering on a graduation into the workplace, and we get discussion of workplace reforms to help employees, before our innocent Red Blood Cell sees how dangerous the body is and how empty that sentiment was. Topics like smoking go far beyond what the original Cells at Work does, by showing the dangers of carbon monoxide at killing the Red Blood Cells and hurting oxygen transportation.

Inevitably, by virtue of this tonal shift, the Cells at Work: Black anime has the far more interesting opening episode of the two shows. For me, however, the interest has less to do with the content switch from gag anime/slice-of-life to action, and more to do with the way the show takes advantage of this new tone to make interesting commentary and touch on new subject matter. 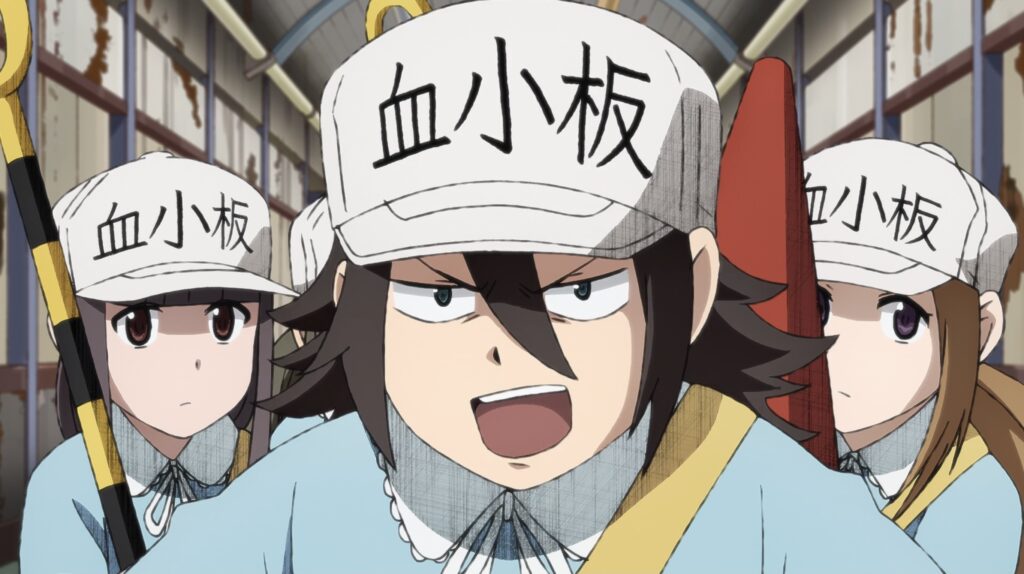 Cells at Work: Black is a powerful rebuke of workplace culture and capitalist excess in a way I hope the show dives deeper into in the following weeks. Whereas the original Cells at Work is more educational about the body (and I won’t deny this doesn’t at least somewhat educate on how things like smoking damage the body), this is more critical of the circumstances that cause disease to manifest and spread, as opposed to the issues themselves. This first episode challenges our perceptions of work by making abundantly clear the ways in which work can, quite literally, kill, and the disinterest of those in power to change it.

The excessive burden the body is under is a clear result of stress and work the body is being put under, and the ways in which coping mechanisms people often rely on are detrimental to bodily health. Overtime and stress at work is what causes the body to drink excessively and smoke, which only makes it harder for the cells to keep the body running. This makes the body struggle against disease, so the body introduces more coping mechanisms that only make things worse too. Inside the body, those in power don’t care about dealing with overtime and other struggles to make conditions better, either. The excesses of capitalism are literally killing the body, and the show wants to make this cause abundantly clear. 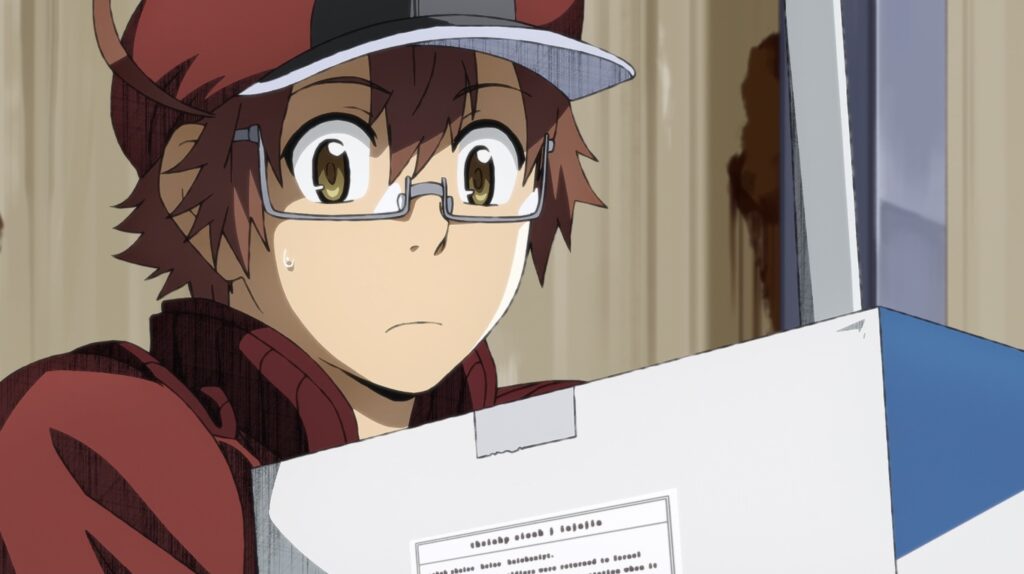 When both the Cells at Work and Cells at Work: Black anime air alongside each other, it allows for a comparison between the two extremes of a healthy and unhealthy body. Each show’s content enhances the message of the other: the healthy body free from stress only reinforcing how overwork and stress can kill and damage the body while the darker tone of Black enforces the healthy living message of the original show. Whereas the concept and each anime are strong on their own, together they thrive.

That doesn’t mean you have to watch both together. If you like one of these anime I can guarantee you’ll enjoy the other, but if you didn’t enjoy the original Cells at Work, I would still recommend giving Black a try due to how different the show is from its parent anime. In any case, the grand return of Cells at Work in animated form is a welcome one, and I’m curious to see where each anime goes from their engaging opening episodes.