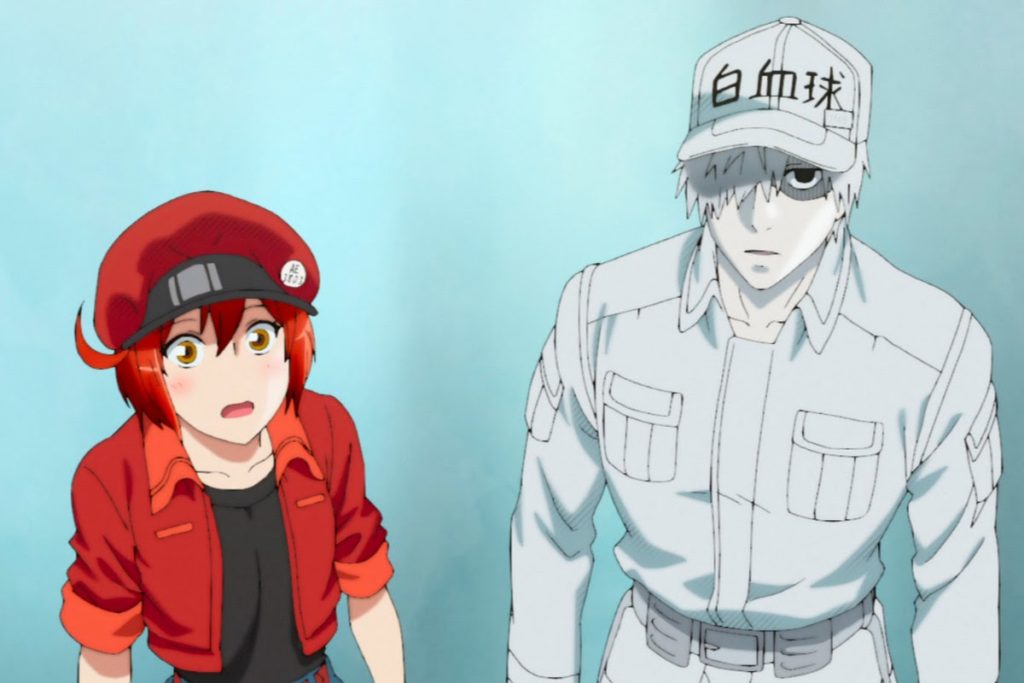 Several years before anybody had ever heard of the novel coronavirus COVID-19, the heroes of Cells at Work! were fighting viruses.

Cells at Work! (Hataraku Saibou) is a cute, funny, and sometimes educational anime about what goes on inside a human body.

Most of the story is simple: the human body is a modern city full of activity. Red blood cells deliver oxygen, while the white blood cells fight various invading germs. There are also serious disasters, such as heat stroke, food poisoning, major head injury, and cancer. (Unlike other works of fiction which take place inside a human body, we never meet the human. But he or she must be extremely unlucky, careless, or both.)

All of the main characters are cells inside an anonymous human body.  The two protagonists are Red Blood Cell and White Blood Cell.

Red Blood Cell (AE3803) is a cute, rookie delivery girl. As a rookie, she’s not the brightest cell in the bloodstream, but she’s determined. She’s nice, sweet and clumsy.

Just like white blood cells in real life, different types of cells serve different functions when it comes to fighting disease. For example, Killer T Cell is even more aggressive and tough than White Blood Cell. On the other hand, Helper T Cell stays away from the front lines and helps with planning and strategy.

There are also hordes of Platelets. They do construction and repairs, such as when the skin gets cut. The Platelets look and act like little children. As such, they are the most adorable things in an already cute show, and they are hard workers despite their small size.

Some of the bad guys are generic alien villains who would fit into Dragon Ball Z. The flu is an interesting exception, because it acts like a zombie plague. Normal cells get infected. The virus sits on top of the ‘zombie’ cell, controlling it. The common cold (rhinovirus) also operates this way. But, it’s less serious than the flu. The cold virus likes to play pranks. The common cold was featured in an original video animation (OVA) which was added to Crunchyroll as episode 14.

Cancer cell is a unique bad guy: he is portrayed as a tragic villain. He is a human cell, not an invading outsider. But he’s a mutant. He is smart, and other cells trust him when he is disguised as an ordinary cell. Cancer hates being a mutant or ‘a mistake,’ and he sees himself as a victim of circumstance.

Manga, Anime, and a Light Novel

Cells at Work! Code Black (2018) takes place inside an unhealthy body. This is apparently a different person than the one in the main Cells at Work! story. Different versions of the normal characters (a male Red Blood Cell and a female White Blood Cell) star in this manga.

The manga Cells at Work! Friend (also known as Cells at Work and Friends!) came out in 2019. It was followed by Platelets at Work in May 2019.

Cells at Work! can be viewed at Crunchyroll (in Japanese with subtitles only; English dubbing not included). Kodansha Comics publishes the Cells at Work! manga. The first chapter is available for free at the Kodansha website. Some of the other spin-offs are also available at Kodansha.