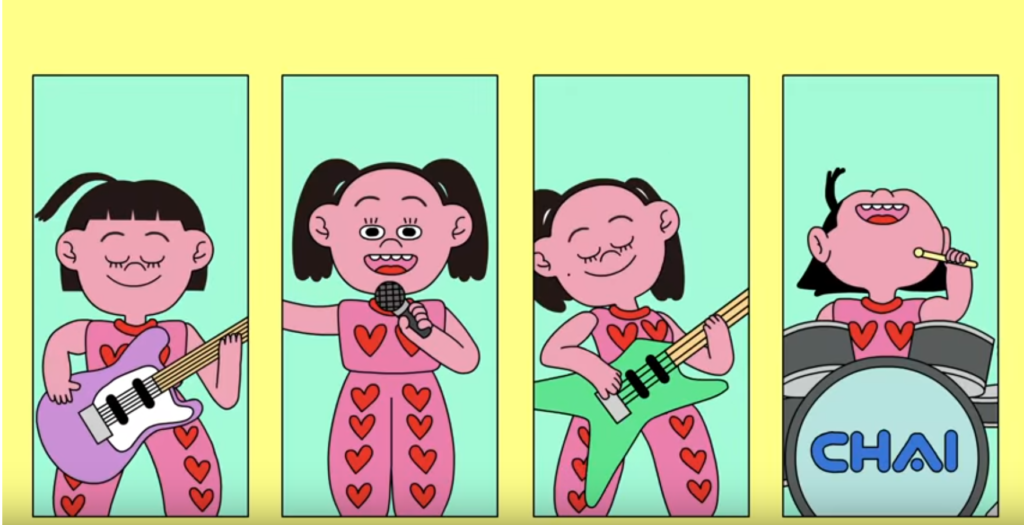 Rock quartet CHAI is having a huge 2019. The Nagoya-born band released their second full-length album PUNK earlier this month, and the genre-hopping set of songs soon won praise from publications such as Pitchfork, The Guardian and NPR among others. They are currently touring North America, including stops at festivals. And that’s just international, as they’ve also graced magazine covers and scored plenty of attention in Japan.

And it’s all well earned! PUNK is an upbeat collection blurring lines between new-wave indebted rock and mid-Aughts dance-pop, punctuated by CHAI’s all-together-now singing. It’s also a celebration of self-love, switching between numbers dwelling on various personal complexes to more outright odes to the potential every person has to simple declarations of “I’m me.” The latest cut from PUNK to get the video treatment is “Curly adventure,” which finds the band singing about hair. Watch the animated clip below:

CHAI recruited Los Angeles-based animator Sean Solomon, who has also created videos for Unknown Mortal Orchestra and Michael Rault among others, to bring “Curly adventure” to life. He turns the band into appropriately charming cartoons and then creates a surrounding world marked by some of the defining lyrical elements found in the group’s music (gyoza, sweets, body positivity).

It’s also a nice compliment to one of PUNK’s standout numbers. “Curly adventure” is an ode to curly hair, one starting with the band admitting to once being troubled by their locks. Considering curly hair has often been looked down on in Japan, that stance makes sense, but “Curly adventure” ultimately turns into an embrace of said attribute. Like the majority of CHAI’s songs, this one’s about ignoring the negative voices and being happy with who you are, delivered via lively hooks.

Check out what the band is up to here, and keep an eye for more live dates.