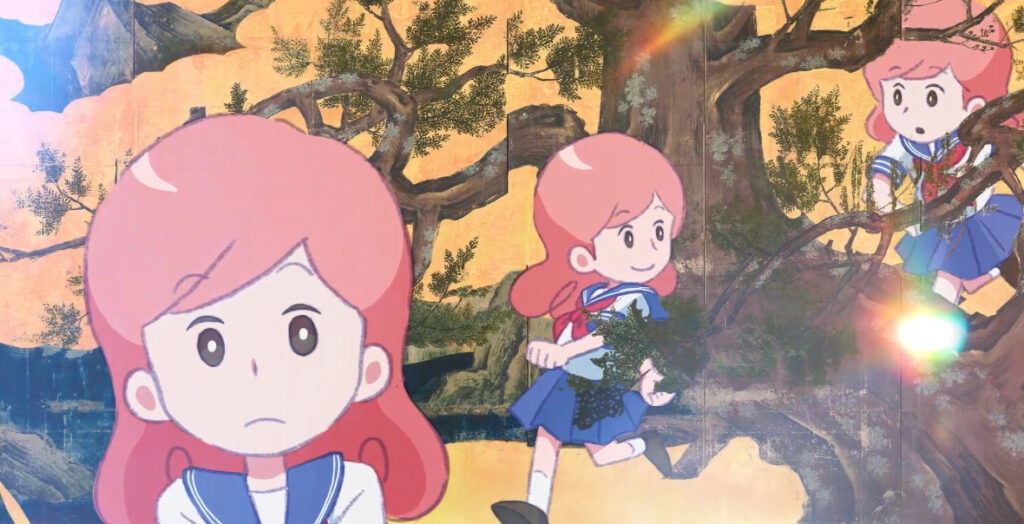 The four-woman rock band CHAI will perform the theme song for the new art history comedy anime series, Oshiete Hokusai! The series will begin in March.

The series posted to YouTube a promo video for the opening theme on Thursday (Japan Time):

This video only gives us a partial preview of the opening. However, it does give us enough of a sneak peak to get some idea of what sort of silly, spunky series Oshiete Hokusai! will be. In the video, the main heroine, school girl Tenkorin (the pinkish-redhead), wanders through some classic Japanese art like an anime Alice in Wonderland. (One is apparently the folding screen Cypress Trees by Kano Eitoku; another is Lake Shore by Kuroda Seiki.)

Her rival, the purple-haired Kanon Kano, is also there. The floaty god is Raijin, who helps Tenkorin. As I noted in my previous story, the art is appropriately clever, as some of the backgrounds look like watercolor sketches. If there are scenes like these in the actual show, and not just in the opening, I will be looking forward to this series, hopefully reaching Crunchyroll or Funimation.

In any case, CHAI’s lighthearted melody seems to fit the series. The opening theme is naturally titled Tenkorin’s Theme, and Tenkorin (voice actress Azumi Waki) sings some of the lyrics. According to the liner notes on the YouTube video, Katsuyuki Konishi as Raijin also joins in, although I only hear Tenkorin.

You can find the website for Oshiete Hokusai anime series here.