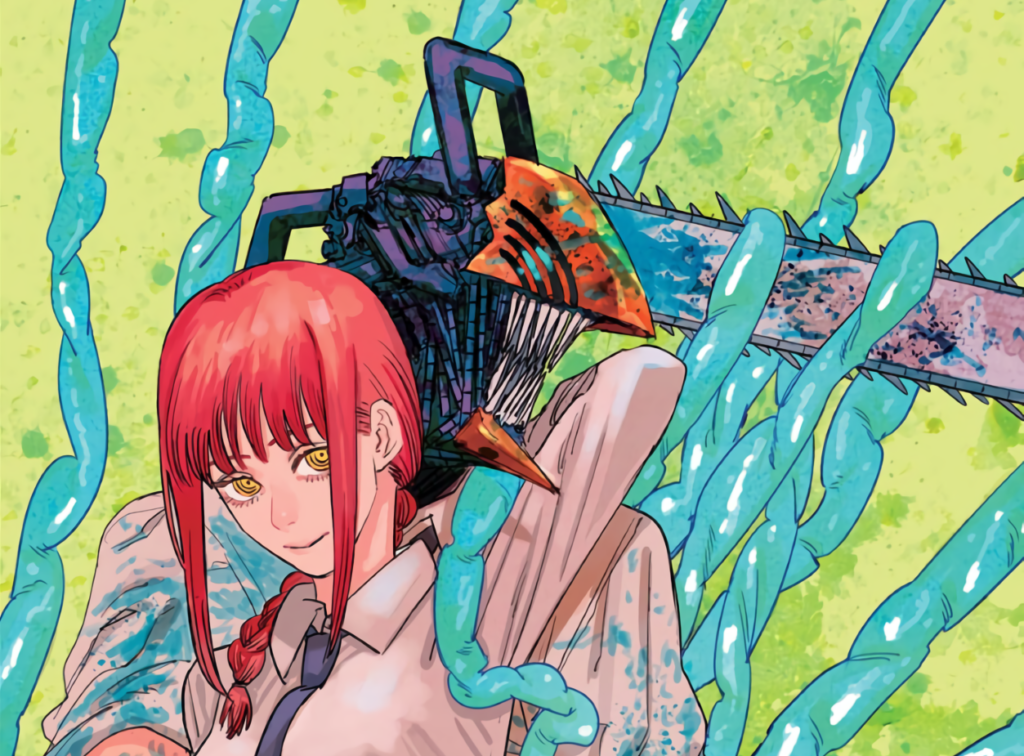 Hello there and welcome to Your Manga Week. Finding time to keep up with all the manga that releases on a weekly basis can be difficult, so I’m here to tell you what’s worth your time and what’s not. We’ll also be discussing the story and arc developments as they come. This week, we’re talking Chainsaw Man chapter 71, Dr. STONE chapter 152, and Agravity Boys chapter 22.

Summer is here, and while most of next season’s anime has been either cancelled or delayed – including The Promised Neverland season 2 – one of the few shows that is continuing unabated is Studio TRIGGER’s BNA: Brand New Animal, which is releasing in batches on Netflix. If you’ve checked it out and are interested in seeing how it was made, then check out some of our interviews – the first one with director Yoh Yoshinari for sure, but also character designer Yusuke Yoshigaki and concept artist Genice Chan. There’s some really interesting stuff in there. Anyway, on with the manga!

Tatsuki Fujimoto’s Chainsaw Man is licking its wounds after literally going to hell and back in its last arc, but that doesn’t mean that the story is being put on hold. Far from it. Not only does Chainsaw Man chapter 71 offer some excellent character moments, exploring and strengthening the relationships between our main characters, it also follows up on some loose plot threads and introduces some new elements that will no doubt be important going forward. Let’s get into it.

First of all, we should offer some comments on the Japanese results of the series’ latest character poll, which were revealed by way of a color illustration in Chainsaw Man chapter 71. While it is no surprise that Power has taken the top spot (the reason why should become evident over the course of this chapter), I’m happy to report that the Angel Devil (whom I have been rooting for all along) has managed to come in sixth place. Score one for my Angelbros. 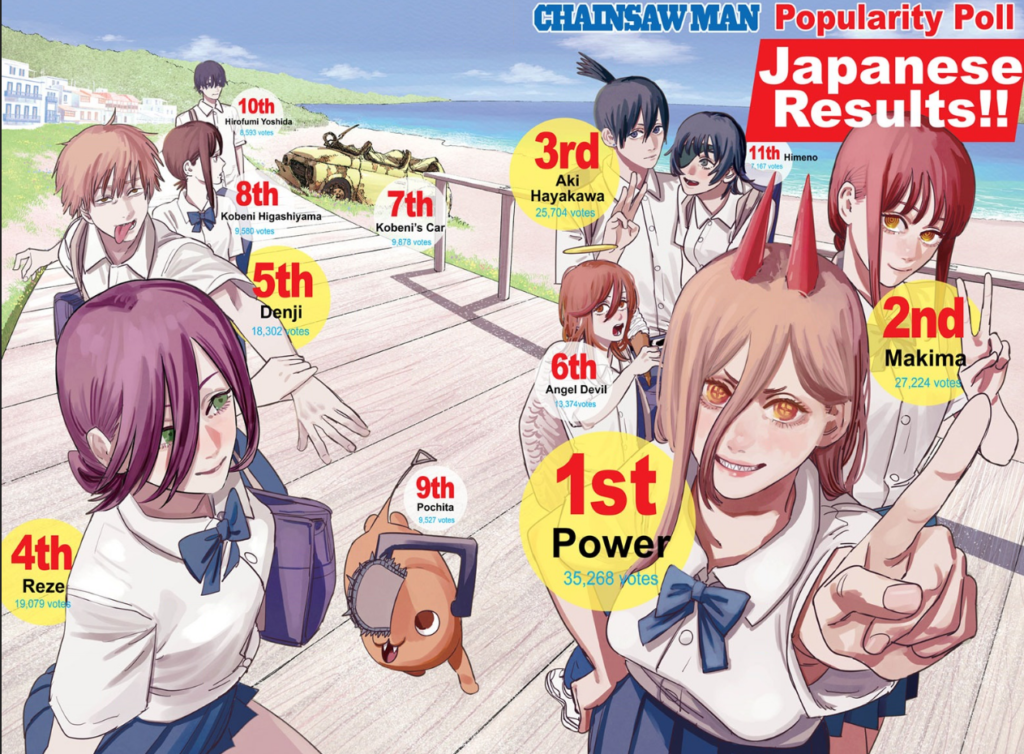 In any case, it is made clear in Chainsaw Man chapter 71 that there are some wounds which will never quite heal. The fallout from the last arc is clear once you consider the number of people who have been either injured or killed: Aki, who has lost one arm; the Angel Devil, who has lost both, and the Violence and Shark Devil, who were both killed in the chaos. Kobeni has also handed in her resignation, although this wouldn’t be the first time that she has done so.

Power has also been immeasurably affected by the carnage, which we’ll discuss a little later. For now, it’s worth focusing on the fact that Denji actually turns down an offer from Makima to go on vacation with her in Chainsaw Man chapter 71, which might mean that he is not entirely smitten with the mysterious woman anymore. Nominally, this is because of Power, but you do have to wonder: to what extent was Denji’s perception of her altered when it became clear that she has some sort of history with the powerful ‘Transcendent’? That’s enough to turn any guy off any girl, that’s for sure.

Finally, we come on to Power. She has been affected psychologically by the Darkness Devil perhaps more than anyone: not only is she afraid that the terrifying being might be stalking her – asking Denji to accompany her everywhere she goes – she’s also afraid of darkness in any form. This hilariously includes, at the beginning of Chainsaw Man chapter 71, the darkness inside her own mouth. 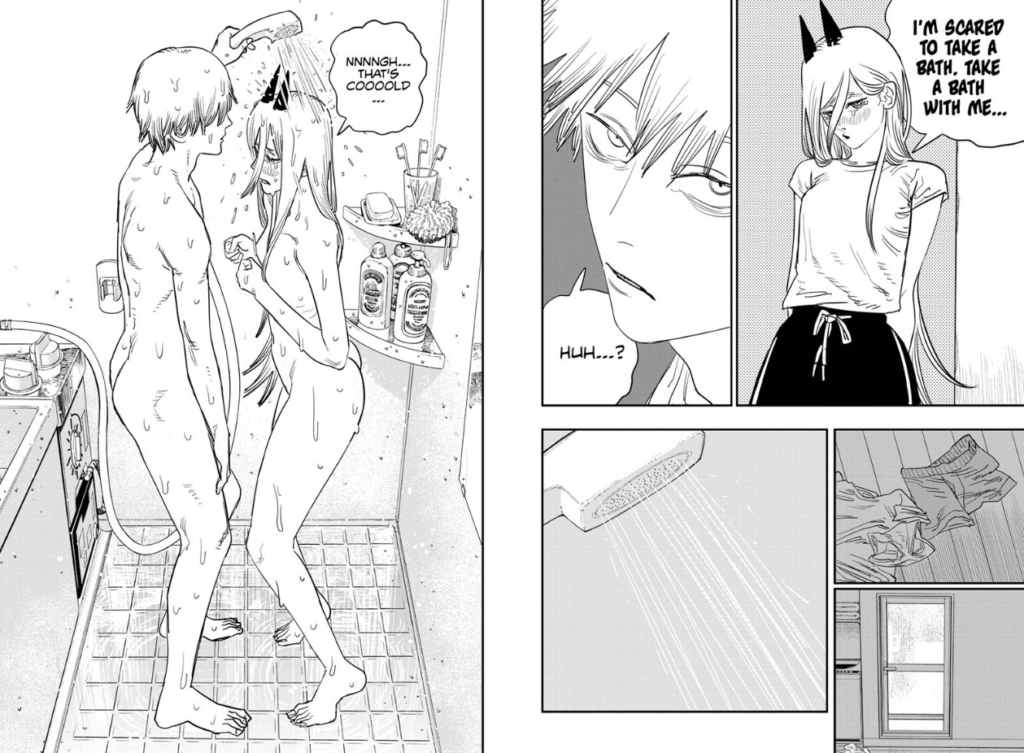 This culminates in a beautiful moment in the second half of Chainsaw Man chapter 71 where Denji and Power take a bath together. The whole scene is fraught with sexual tension, as Denji is known to be quite an excitable person, but he is able to resist. Nominally, this is because he and Power share a strong bond, but there is also the fact that Denji is increasingly what he wants out of life – does he really just want to ‘feel boobs’? That also no doubt has something to do with his refusal of Makima’s offer, so let’s keep our eyes peeled going forward.

One final thing that Chainsaw Man chapter 71 follows up on is what is behind that mysterious door. The fact that it was introduced right after the Angel Devil’s bombshell that Denji may, in fact, be Lucifer himself seemed to suggest that it has something to do with his true nature, but there has been no further development since then. Neither does the issue get resolved in Chainsaw Man chapter 71 – Denji says that he doesn’t “need to know” – but the fact that Tatsuki Fujimoto has brought it up again shows that it will be important going forward. Watch this space.

Next up, we come to Dr. STONE chapter 152. A lot has happened since we last checked in with Riichiro Inagaki and Boichi’s science series, so let’s recap. The crew made landfall in the US of A, which is great news, but they quickly came up against a fearsome new foe: Dr. Xeno, who both sounds and looks like a villain straight out of a Saturday morning cartoon. Even better.

Last week’s chapter, in turn, saw Gen infiltrate Dr. Xeno’s base and attempt to engage in some subterfuge. To cut a long story short, he ended up giving Taiju’s name instead of Senku’s when asked for their leader, which is why Dr. STONE chapter 152 mainly consists of Taiju trying his best to sound clever while simultaneously trying to obtain information from Dr. Xeno and conceal his own. It’s a tough job, but someone’s gotta do it. 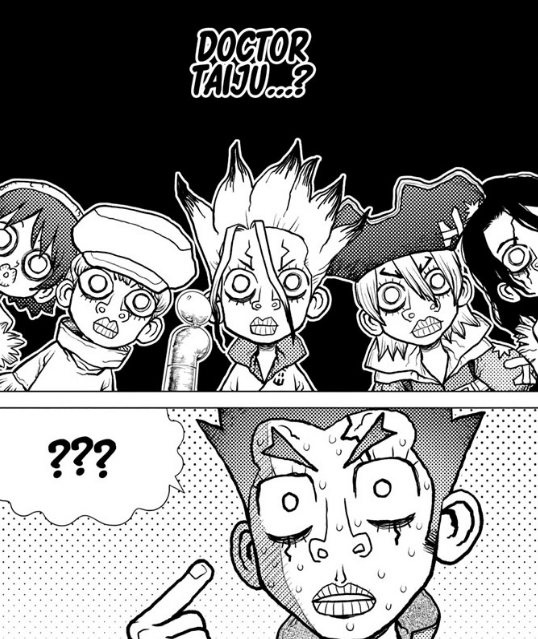 Taiju’s (verbal) clash with Dr. Xeno in Dr. STONE chapter 152 really hit home for me how author Riichiro Inagaki has been able to rehabilitate his character over the course of the series’ run from a slightly disconcerting beginning. I remember when I first started to read the series back in 2018 that I disliked his shouty nature, as well as his apparent positioning as the protagonist over Senku. This all changed back he was reintroduced in the Stone Wars arc, as his relationship with Yuzuriha had softened him somewhat and it was now clear that he was just one member of the supporting cast. Without this previous work, it is unlikely that I would have enjoyed Dr. STONE chapter 152 as much as I did, so hats off.

Nevertheless, we shouldn’t place too much focus on the old, as there is plenty new to explore in Dr. STONE chapter 152. Firstly, Taiju’s conversation with Dr. Xeno reveals that the Kingdom of Science’s enemies for this arc have a fearsome amount of technology. These include the previously introduced airplanes and guns, but also a Haber-Bosch plant, with which they can make an unlimited supply of ammunition and weaponry. That’s certainly nothing to be sniffed at, especially considering that Senku and crew only just expanded into naval warfare. 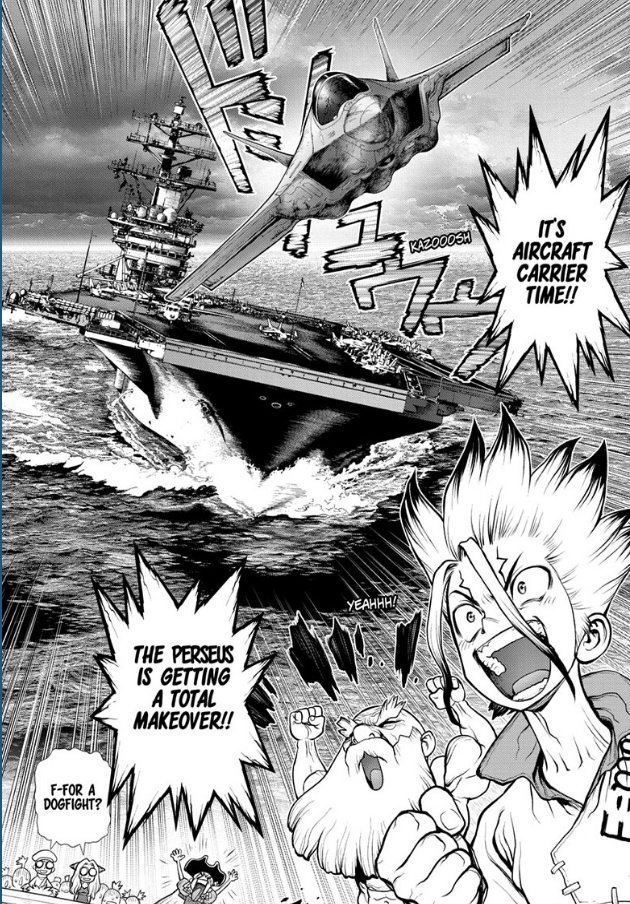 Luckily, the Kingdom managed to recover one of Dr. Xeno’s aircraft a couple of chapters ago, which seems to signal that this coming arc will be centered around some form of aerial warfare – strengthened further by Senku’s order that the Perseus be refitted into an aircraft carrier (see above).

While the arc seemed to be originally gearing up for a scientist vs. scientist clash, this development in Dr. STONE chapter 152 changes things somewhat. Sure, Senku will no doubt play an important part on the ground, but it seems unlikely that he and Xeno will be piloting any aircraft any time soon. That might not be such a bad thing, though, considering that the Treasure Island arc was also premised around the clash between Senku and a single antagonist, which didn’t go all too well.

Overall, there is a lot of setting up going on in Dr. STONE chapter 152, but this is necessary for the coming narrative arc. Although I do enjoy speculating on what is to come and spending time with our supporting cast, I am certainly looking forward to next week’s chapter, where we may get some proper action.

Finally, we come to Agravity Boys chapter 22. It feels almost like poetry that just as I post my review of Atsushi Nakamura’s series, calling it the inconsistent ‘drunk man’ of Weekly Shonen Jump, two chapters come along that exactly prove my point: chapter 21, which almost completely passed me by, and chapter 22, which had me laughing multiple times and even impressed me with the depth of its comedic writing.

The main concept of Agravity Boys chapter 22 is that Saga, Baba, Geralt and Chris mistake another ethereal being for their friend/tormentor the Higher Being (HB). This other HB (let’s call them OHB) is also a scumbag, taking advantage of the four friends’ hospitality and drinking their coffee, eating their food while making no effort to correct their misunderstanding. They’re the worst type of freeloader, and they don’t even appreciate what they’ve been given.

There are many hilarious moments in Agravity Boys chapter 22, but my favorite by far has to be when OHB and the four friends are doing karaoke. It starts off with the ethereal freeloader ordering a load of food and drink on their tab, which is the worst type of scumbaggery, before commenting on the four friends’ singing styles. Not only is this hilarious, it also adds a layer of commentary that explores the close relationship between the four characters and what type of role that they play. 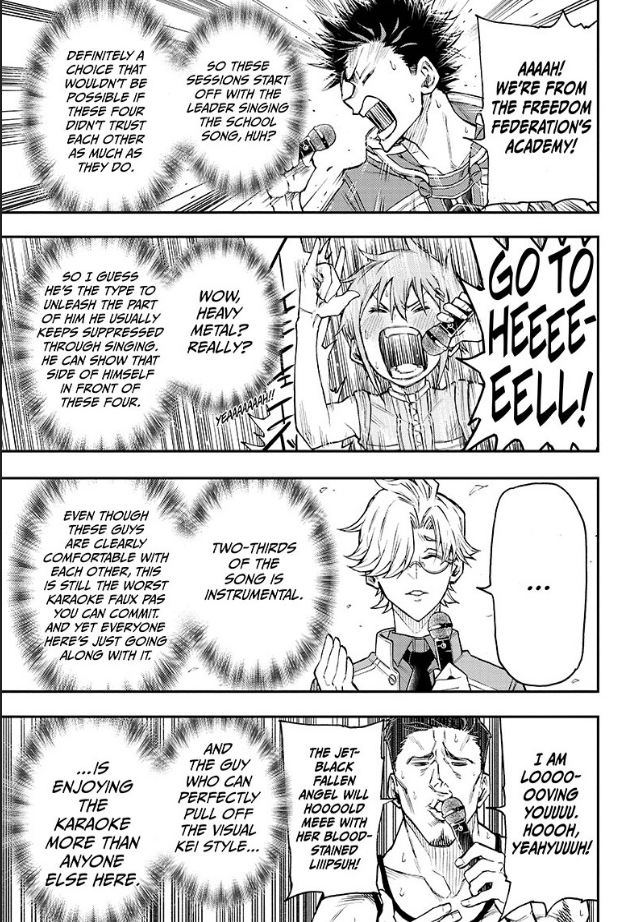 The chickens do eventually come home to roost, however, as the climax of Agravity Boys chapter 22 sees the actual HB taking out his anger on the OHB. Not only is Nakamura’s representation of his overall power quite striking – using light, shadow and other grotesque objects to their full potential – this also reveals the fact that the HB does, deep down, care a lot about the titular quartet and its relationship with them. This makes the punchline of the chapter sting that much more, then, when another OHB manages to worm their way into the base.

In comparison with last week’s chapter, Agravity Boys chapter 22 is much stronger. While last week was much more zany, taking Arsh’s love and admiration for Geralt to a bizarre extreme, this week’s chapter was much more grounded, sticking with the basic premise of mistaking another ethereal being HB quite well. Further, if Nakamura can keep creating stories of this calibre, then he will have no problem sticking around in the magazine for a while yet – but, then again, the problem with drunk guys is precisely that they tend to stagger to and fro. Perhaps asking Agravity Boys to walk in a straight line is a fruitless endeavor.