Chainsaw Man Chapter 82 Proved Too Much for Mengo Yokoyari 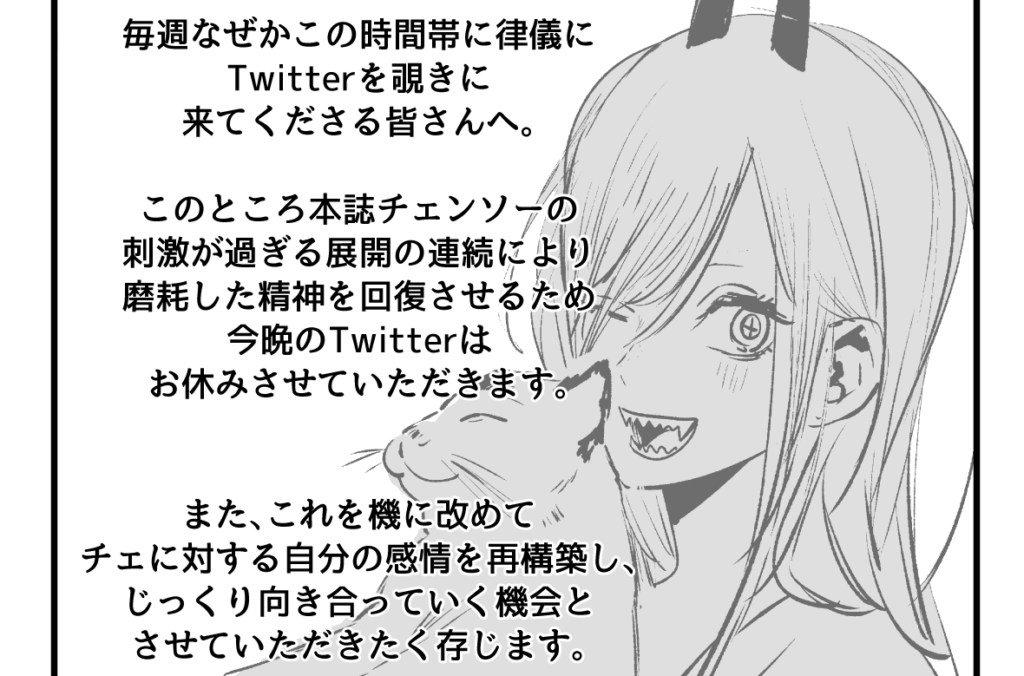 Navigating Twitter on a Sunday night can be quite overwhelming, as that is when the latest Weekly Shonen Jump chapters are released online. Many series are going through important developments right now, but none of them have proven as shocking as Tatsuki Fujimoto’s Chainsaw Man, which is currently in the middle of killing off most of its main characters. This is affecting everyone, not least of which Mengo Yokoyari, author of Scum’s Wish and Oshi no Ko (with Aka Akasaka), who has sustained massive damage as a fan of the series.

Yokoyari put out the following “hiatus announcement” on Twitter on August 30, saying:

“Hello there, everyone who for some reason comes to conscientiously check on my Twitter at this time each week.

Developments in this week’s chapter of Chainsaw Man have proven too shocking to bear, and so I will be taking some time away from Twitter this evening to heal my battered soul.

Furthermore, I will be taking this as an opportunity to once more reconsider my opinions and feelings towards the series and face it head on.

(This week’s Oshi no Ko will be published as normal, so please rest assured.)

Obviously, this is meant as a bit of a tongue-in-cheek overreaction to the events in Chainsaw Man chapter 82, but Mengo Yokoyari’s statement no doubt echoes the feelings of many fans right now. She was back to her usual tricks not a couple of hours later, as she posted this excellent piece of fan art featuring Denji and Makima:

This isn’t the first time that Mengo Yokoyari has expressed her love for Chainsaw Man. Just one week prior, she drew Denji with the caption “My love has exploded” and drew Himeno on August 8, saying “Lifehack: draw your favorite character to cheer yourself up”. There are many other examples, including her reaction to the special live-action PV created for the series’ seventh volume: “No matter how many times I watch real-life Denji, tears come to my eyes. Amazing.”