Chainsaw Man: Manga on the Edge

Perhaps the best way I can introduce the core appeal of Tatsuki Fujimoto’s Chainsaw Man is by saying that the main character of the series is a demonic, violent teenager who just really, really wants to squeeze some boobs.

If that sounds unappealing to you, then I don’t blame you. In many ways, this up-and-coming Weekly Shonen Jump series is on the edge – of reason, taste and, indeed, the landscape of the iconic shonen magazine itself. Let’s get into it.

Chainsaw Man starts off with a fairly bombastic premise: Denji, a 16-year-old boy, works as a Devil Hunter for the yakuza, living in abject poverty as he works to pay off his father’s debt.

He lives with his pet Devil Pochita, who lends him his chainsaw powers in order to take down the Devils. He’s also the only real friend Denji has in his impoverished life without any of the creature comforts we’ve become accustomed to in the modern age.

That is until the yakuza decide to cut professional ties with Denji, literally cutting him up into tiny pieces and placing him into a trash can. It’s at this moment that Pochita fuses with Denji, reviving him as the half-human, half-Devil titular Chainsaw Man. 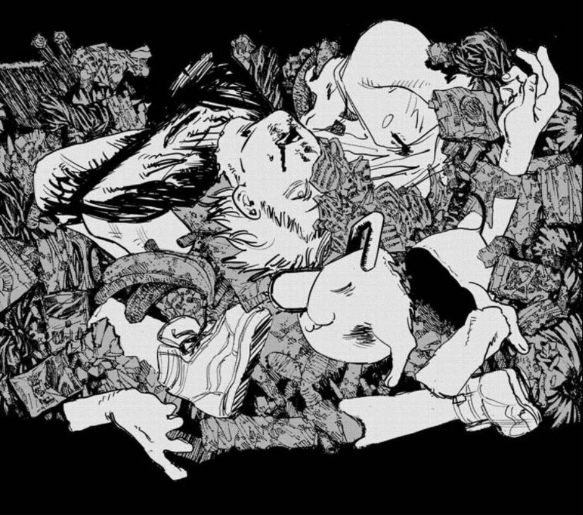 After this transformation, Denji finds himself roped into the career of a professional Devil Hunter in service of the state by a pretty lady called Makima, who he instantly falls in love with.

All of this set-up might sound quite familiar when it comes to the realm of shonen storytelling. It even reminds me of the premise of Jujutsu Kaisen, which also featured a normal boy being transformed into something half-demonic and then roped into a public institution to use those powers for good.

Yet, Denji is not your typical shonen protagonist. Unlike My Hero Academia’s Midoriya Izuku or even Jujutsu Kaisen’s Yuuji Itadori, Denji is not motivated by justice, revenge or anything that could be considered ‘just’ – rather, all he wants to do is fulfill his base desires in life, which include eating good food, sleeping a lot, and, of course, touching some boobs. 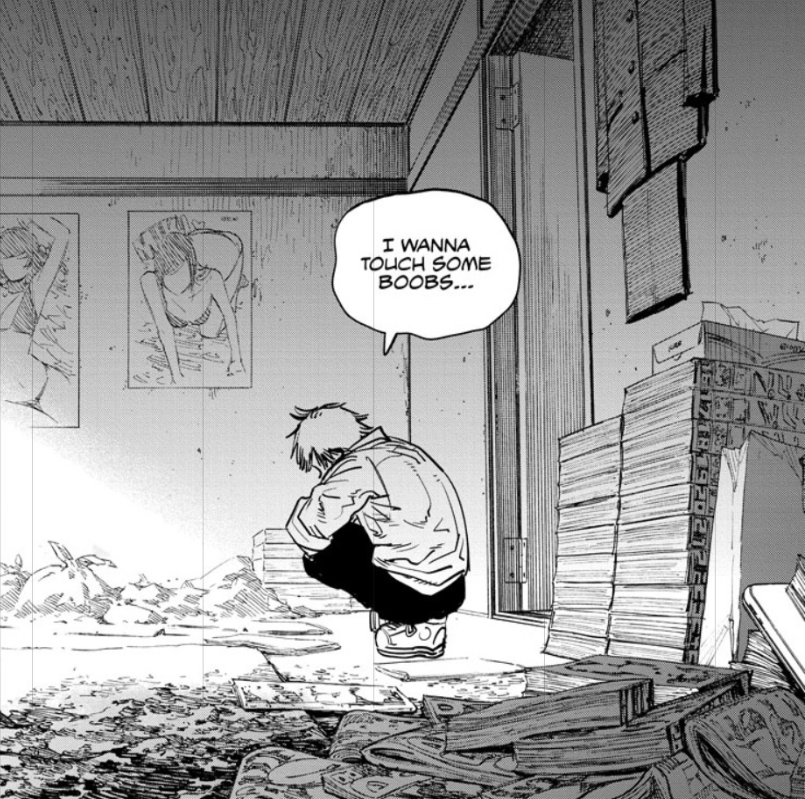 Denji is so utterly irredeemable as a character that, ironically, he ends up being quite endearing – his motivations are not lofty, but base; ones that we can all understand, at least to some extent.

It’s also important to note that there is an element of parody at play here. Chainsaw Man’s grimdark art style and Denji’s gory transformation into the Chainsaw Man makes me think of Guts in Kentaro Miura’s Berserk – and, given how ubiquitous the series is in Japanese popular culture, it wouldn’t surprise me if this was intentional on Tatsuki Fujimoto’s part.

In fact, you could quite comfortably call Chainsaw Man a dark fantasy in the vein of Berserk – especially given how dark of a series Tatsuki Fujimoto has created thus far.

Even the beginning of the story starts off on a rather heavy foot, as it is revealed that Denji’s father killed himself to get away from his debts to yakuza – thus leaving it all to Denji, showing us how selfish such an act can be.

Denji’s powers are not exactly happy-go-lucky, either (this ain’t no Kamehameha), as transforming into Chainsaw Man using Pochita literally tears his body to pieces and chainsaws sprout through his arms and his forehead. As you might be able to guess, this also generates a fair bit of gory collateral. 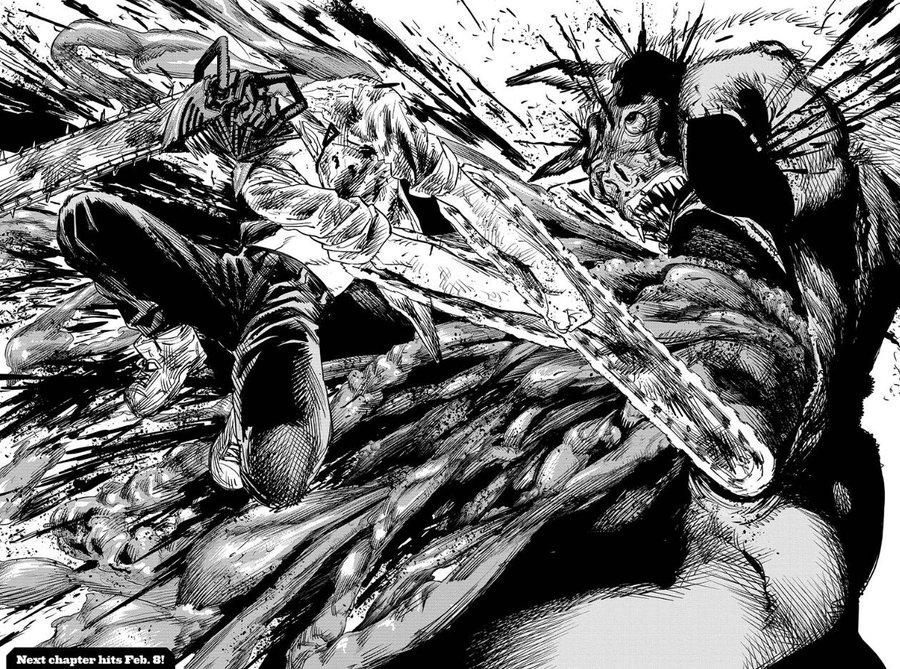 Yet, even among these dark elements, there is one that is more adult than everything else – the series’ obsession with sex and sexual humor.

This mainly stems from Denji’s own obsession and fixation on such things, but other characters do feed into this. Makima uses her own wiles to force Denji into work, generating some very steamy scenes. There’s even one point where the 16-year old Denji is propositioned for sex – albeit, he doesn’t go through with it, but is nevertheless quite a rare thing to see among the pages of Weekly Shonen Jump. 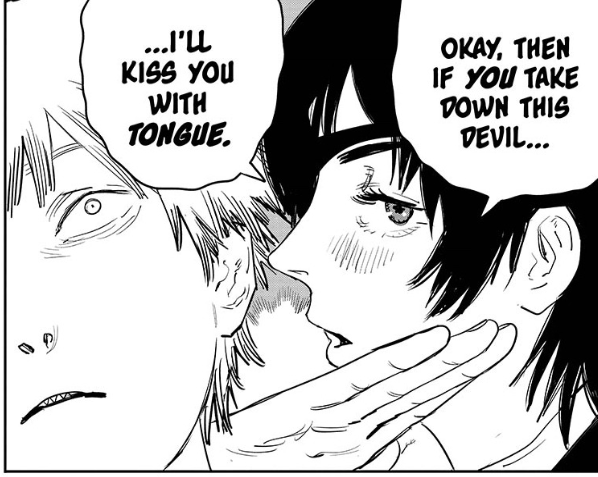 Seeing such a series in Weekly Shonen Jump can be a little confusing given that the magazine is supposed to be for ‘boys’ (shonen). Chainsaw Man certainly isn’t something I’d want my kids to read, that’s for sure.

Therefore, Chainsaw Man seems to be on the edge of what many would consider appropriate for the magazine, and I would tend to agree. It’s content and presentation very much remind me of something you’d see in the sister magazine Jump SQ, which tends to target an older, seinen audience.

Yet we mustn’t forget that the shonen genre is as varied as it is seemingly contradictory. As Weekly Shonen Jump editor-in-chief Hiroyuki Nakano said himself, often the editorial team let more adult content pass in order to keep the attention of the audience, creating a ‘cooler older brother’ type image.

Furthermore, in Chainsaw Man’s case, this kind of content is not simply gratuitous or meant for eye candy. Rather, it’s supposed to underscore the stakes of the shonen story and highlight their importance, much in the same vein as Berserk.

It’s also important to realize that a lot of this content is not being viewed through adult eyes. Denji is actually only 16 years old, which gives such content a much more juvenile visage than an overtly adult one.

Denji’s age is especially important when considering that the shonen demographic does, in fact, stretch from around 12 to 18 years old – beyond which it becomes seinen. He’s, therefore, a protagonist that many readers of Jump can empathize with, if not just in terms of age but then in impulses and behavior. 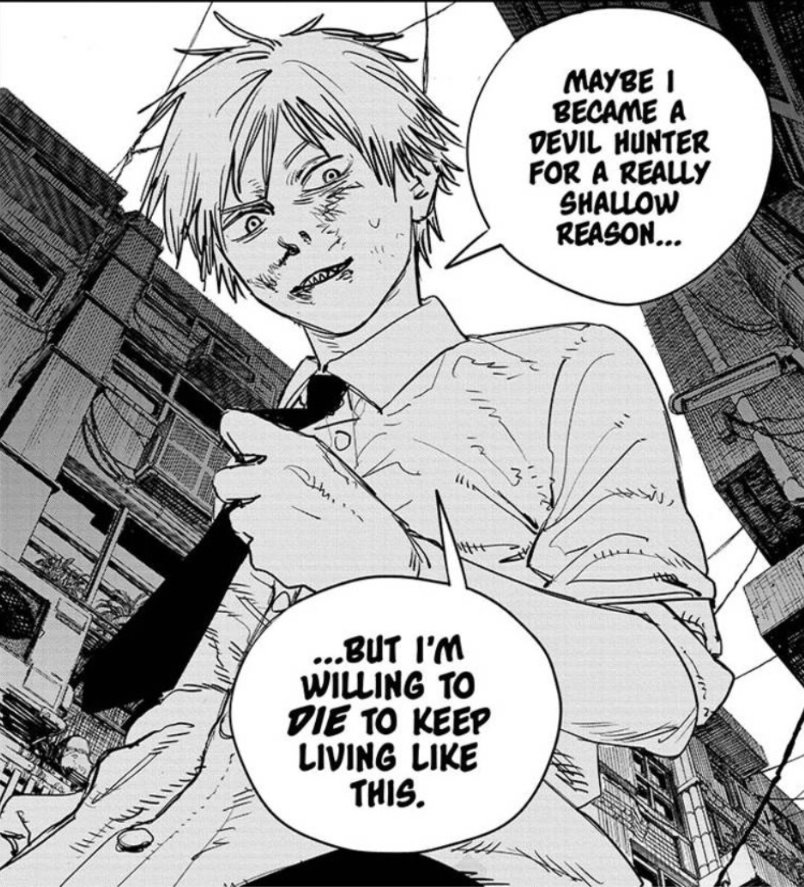 Catering to such viewers is important in keeping afloat the diminishing sales of shonen magazines, even the gargantuan Weekly Shonen Jump, as they are more likely to stay loyal to one magazine and buy it every week, perhaps with money from a baito (part-time job).

In any case, trying to hide such adult content from younger kids is useless. It’s pretty much a fact of life, and it can, in fact, inform kids if dealt with in the right way.

As Hiroyuki Nakano also said, kids will always want to read what they can’t understand. Putting such adult content in a manga that will probably go over their heads in might not be conducive to understanding, but can, all the same, make them love the magazine even more.

The question is: does Chainsaw Man truly deal with this content in the right way? Does it not teeter on the edge of what might be acceptable in Weekly Shonen Jump?

While this might not seem the case at the beginning of the story, now that Tatsuki Fujimoto has had a chance to develop the story over 30 chapters, it’s quite clear that all of this serves a purpose. 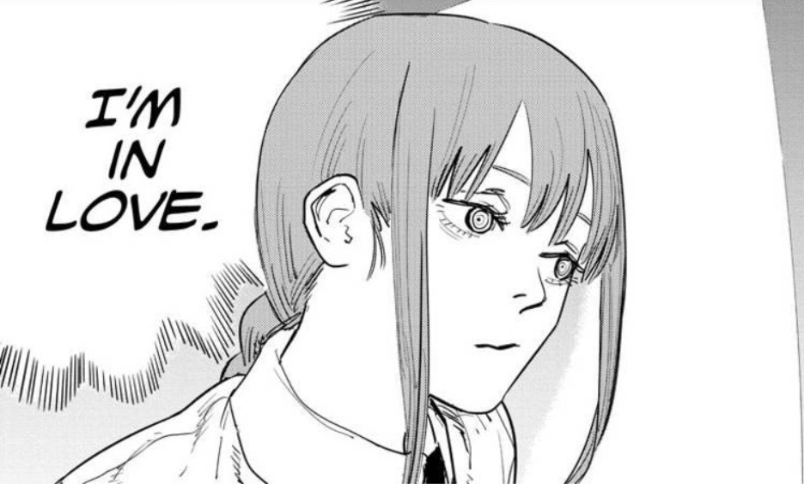 In the first instance, Denji’s utterly irredeemable nature is not only played for laughs but also for tragedy, as it is hinted that Pochita ‘becoming’ his heart has made him lose any sense of human empathy or compassion.

In this sense, I wouldn’t be surprised if Chainsaw Man’s narrative through-line ended up being the redemption of Denji as a character, as he moves past base desires to claim a more just, more typical shonen motivation.

The series is certainly moving towards this type of narrative, as Denji fulfills his various desires only to find out that they’re not all that he hyped them up to be.

This development is also indicative of the more general, very real transition from adolescence to adulthood, which isn’t such a bad thing to show the pubescent readers of Weekly Shonen Jump.

Furthermore, Tatsuki Fujimoto has also made serious steps towards placing Chainsaw Man into a more conventional, shonen narrative structure with a set antagonist in the form of the fearsome ‘Gun Devil,’ major character death as a motivating factor, and a training arc.

In this sense, Chainsaw Man is becoming more and more of a ‘typical’ Weekly Shonen Jump manga – especially coming to resemble more and more Gege Akutami’s Jujutsu Kaisen, as they already share much of the same premise and demonic aesthetic.

So while Chainsaw Man might feel like a bit of an outlier in terms of content and tone when compared to the typical fair in Weekly Shonen Jump – teetering on the edge of what’s appropriate and what’s not appropriate for kids – perhaps it’s not so wild as it may first appear.

Other factors also come into the picture, such as the vague definition of what is ‘shonen’ itself, how the content is addressed, and why the author has employed it. Volume sales being pretty good also probably doesn’t hurt, either.

So if you’re down for a little bit of gory, raunchy shonen action – and if that doesn’t teeter on the edge of your own personal taste in manga – then definitely give this one a shot.

VIZ Media is currently publishing the series simultaneously as it launches in Japanese via their English-language Shonen Jump.