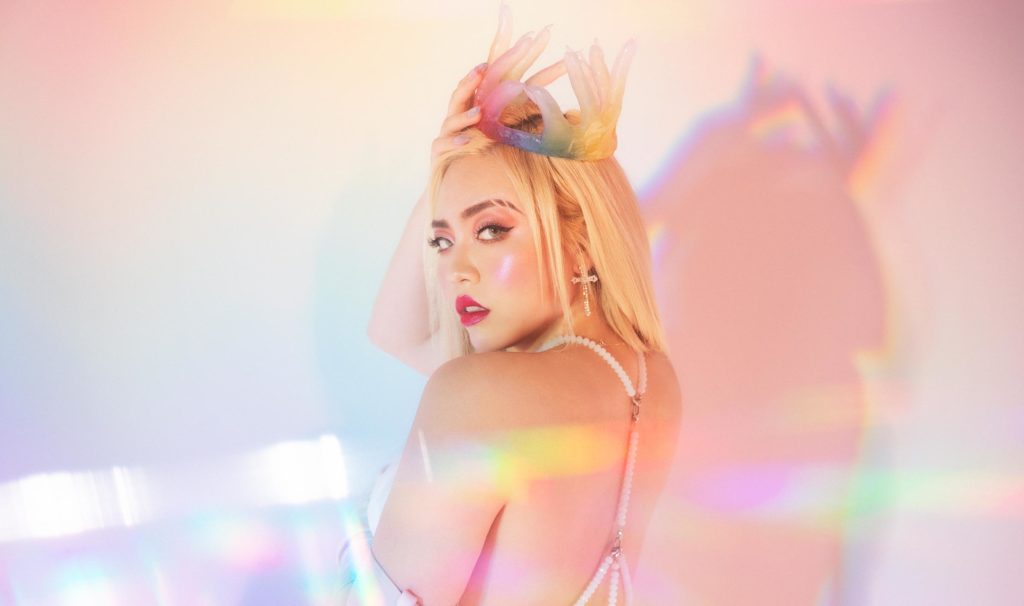 Japanese rapper Chanmina came to most people’s attention by getting right into their face. Her earliest songs to gain widespread attention online were aggressive numbers where you could practically feel the breath on your neck. Her EDM-tinged wrecking ball of a collaboration with TeddyLoid lead to the swaggering “FXXKER” with similar buzzsaw energy. That’s how you make an impression, especially in a corner of Japanese music often dominated by men — storm out and don’t hold back.

That’s a hell of a way to make a first impression, but not always a winning formula for creating music that leaves a mark long term. Chanmina, wisely, hasn’t rested on her ready-to-throw-down energy. Sprinkled across all the high-energy rap have been more reflective numbers, often guided forward by modern pop percussion put offering new layers to Chanmina. Yet her full-length releases tended to go too hard on the mean-mugging, offering great blasts of energy but eventually tiring out. You can only be a firecracker for so long before it explodes.

On her newest album Never Grow Up, she finds the right balance between confidence and confession, resulting in her best album to date and a high mark for Japanese rap trying to reach a wider audience in 2019. Listen to the album below.

Beyond the emotional layers found here, Never Grow Up also reminds that Chanmina might represent one of the better chances that the Japanese hip-hop community to cross-over to the more mainstream pop community. While a handful of Japanese rappers have managed to raise their profiles domestically (not to mention nab big co-signs internationally), none have really become the kind of names that people who follow music from a distance know all that well. Chanmina’s music, though, often works in elements of modern pop to give those who aren’t familiar with the world she comes from something to grab on to. The title track builds around a catchy guitar melody and finds her barely rapping, instead delivering breezy vocals that build up to a speedy hook. “GIRLS” gives her a Technicolor chug to celebrate her friends over, while “Like This” and “Call” use a trop-house template to produce some of Chanmina’s catchiest numbers to date.

Yet she doesn’t compromise her attitude, despite the pop accessibility many of the songs scattered across this album. Chanmina still goes off across Never Grow Up, and the same toughness that helped break her into the Japanese music community remains every bit as thrilling in 2019. “I’m A Pop” works as an exploration of her versatility while also being the best display of her rapping prowess yet, as she flips from a steely delivery to outright singing to a more menacing flow. She’s more locked into a single style on “My Own Lane,” a number that offers a good bit of self-celebration.

What really sets this album apart from Chanmina’s previous work is how much more vulnerable she gets. From the opening off-season tropical shuffle of “Call,” she’s allowing longing and melancholy to take a place in her sound alongside the bluster. “PAIN IS BEAUTY” approaches pure balladry, a potential tripwire that Chanmina navigates around thanks to her vocal prowess, while she gets really regretful on the outright apologetic “Yesterday.” All of this adds depth to Chanmina’s world, revealing even the most confident artists can also wrangle with heavier feelings.

Nothing better sums up the balance Chanmina achieves across Never Grow Up in a single song than “Doctor,” a number (above) that has been out for a while but still stands as this album’s best moment. This is Chanmina embracing every side of her sounds, delivering clever and crushing raps before pivoting to poppier places and even engaging with her inner drama kid (you need to have a taste for theater to pull off a line like “oh my god I’m gonna die” over piano notes). It’s an emotional whirlwind packed into just three minutes, and it’s unlike anything else present in Japanese hip-hop, with the closest comparison I can think of being WEDNESDAY CAMPANELLA’s more intricate creations. That spirit, though, runs through all of Never Grow Up, and establishes Chanmina as a true force in both rap and pop lanes.

Rapper Chanmina Is Putting Her Stamp on Rap, and Her Latest Song “Call” Shows How