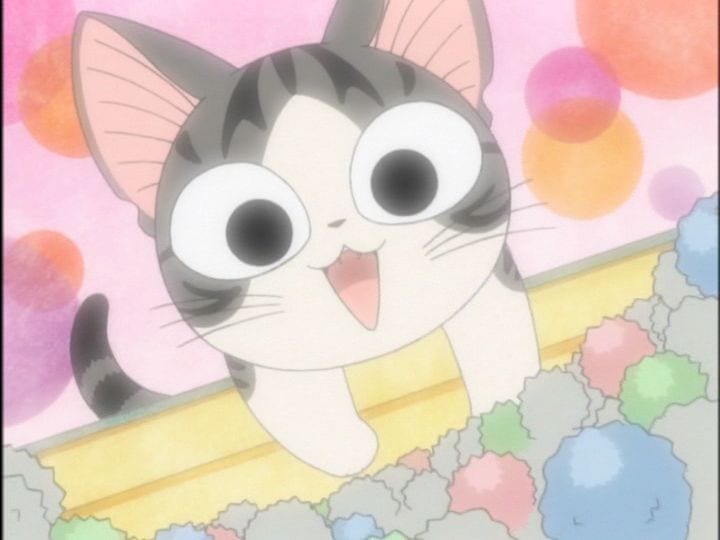 When a young, gray and white kitten with black stripes, gets separated from her family on a walk, she ends up found by a young boy. In no time, the kitten becomes a part of the family and with that simple premise, cat lovers and fans of all things cute are invited along to see the world through the eyes of Chi, the titular kitten, of Chi’s Sweet Home.

From Manga to Multiple Anime Series

Written and illustrated by Kanata Konami, Chi’s Sweet Home started out as a manga series serialized in Weekly Morning, a manga magazine aimed at the seinen aged audience of young men a little bit older than the typical audience targeted by shōnen manga. Beginning in 2004, the manga ran until 2015 and was eventually released in 12 volumes.

Prior to Chi’s Sweet Home, Konami created a couple of other cat focused series: Buchi Neko Jamu Jamu, published in 1982, and FukuFuku: Kitten Tales from 2014.

In 2008, while the original manga series was still running, an anime adaptation started airing that would go on to last for two seasons with the second season having the title Chi’s Sweet Home: New Address. The series was directed by Mitsuyuki Masuhara who had directed episodes of such anime like Death Note, Ninja Scroll: The Series, Chobits, and much more and would go on to direct episodes of Highschool of the Dead and Blade, among others.

The anime version of Chi’s Sweet Home would finish its second season in 2009 with both seasons consisting of 104 episodes. Each episode is quite short, only lasting approximately 3 minutes and would tell the story of one chapter from the manga.

In 2010, an OVA entitled Chi’s Sweet Home: Chi Meets Cocchi was released. The OVA was directed by Morio Asaka who would later direct such titles as Sword Art Online and Cardcaptor Sakura: Clear Card, to name a few. The OVA is relatively short, only lasting 13 minutes and was produced by the same studio as that which released the first two seasons of the anime, Madhouse.

A new anime series, animated with 3D Computer Graphics(3DCG), was aired from 2016 to 2017 under the title Koneko no Chī: Ponpon-rā dai bōken with the English title being Chi’s Sweet Adventure, consisting of 57 episodes. The second season came out the following year, in 2018, with 25 episodes.

The newer seasons, aside from having a different animation style, were also released by a different studio, Marza Animation Planet. They were directed by Kiminori Kusano.

In terms of plot, Chi’s Sweet Home is relatively simple and straightforward. While going on a walk with her mom and siblings, a young kitten gets lost. After she wanders away from her mother, she’s found by a young boy named Youhei and his mother. They take the kitten home and try to find her family, but when that doesn’t work out, the Yamada family decides to keep her despite their housing complex not allowing pets.

The kitten is Chi. The young boy is Youhei Yamada, and his parents—called Mom and Dad though their names are Miwa and Kento Yamada, respectively—call her Chi because while she is being housetrained, she starts responding to ‘shi’ from the Japanese word ‘shikko,’ which means ‘urine.’

Chi is gray, white, and adorable. While the audience can hear her talk, the Yamadas can’t. Later on, Chi meets another kitten that looks very similar to her but is a boy and has differently patterned fur. His name is Cocchi.

Other characters include Mi-Chan, a rabbit, an older black cat named Blackie—the Yamadas call him ‘The Bear Cat’—and others.

It should come as no surprise, given how cute the kitten protagonist of Chi’s Sweet Home, that there is a huge demand for Chi themed merchandise. There are onesies, mugs, keychains, and more, all featuring Chi in various adorable poses. The series has inspired the affection of fans to the point that they can even get Chi themed headphones.

In fact, the reception of Chi’s Sweet Home has uniquely earned the series spots on a number of lists like ‘Anime For Cat-Lovers (The Best 5 Series if You Love Cats),’ ‘Top 10 Cat Anime [Best Recommendations],’ and other similar rankings. Chi herself often makes lists such as ‘Top 20 Cute Anime Cats‘ and ’10 Most Memorable Anime Cats’ in which she comes in at #3, beating out the likes of Meowth from Pokémon, Luna and Artemis from Sailor Moon, and other iconic anime felines.

Needless to say, Chi of Chi’s Sweet Home has left quite the impression on that ever so worthy cross-section of anime fans and cat lovers.