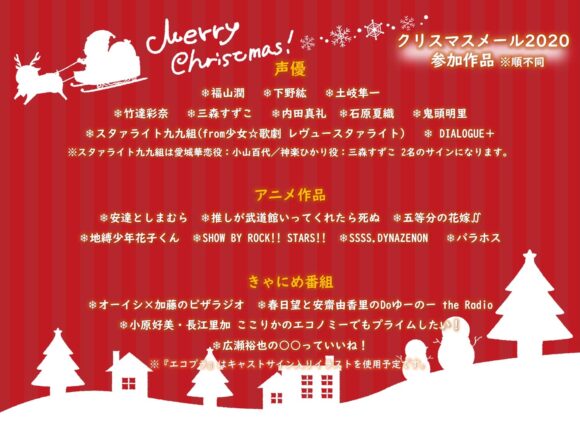 Christmas is right around the corner, and I’m sure we all could use some holiday cheer after surviving 2020. In case you’re already too used to your stocking filled with the usual batch of anime Blu-rays and figurines, there are always plenty of alternatives. How about some Christmas cards from your favorite voice actors and staff?  It’s possible through the annual Kyanime Prime Christmas Mail event!

The good people over at Pony Canyon gathered some of the biggest names in voice acting into this yuletide affair. Those on the list include superstar darlings like Jun Fukuyama, Hiro Shimono, and Akari Kito, and others like Momoyo Koyama and Suzuko Mimori representing the 99th Starlight Class from Revue Starlight. You’ve even got the idol group DIALOGUE+ and various members of Adachi and Shimamura and SSSS. DYNAZENON’s team and Pony Canyon’s own PIZZA RADIO giving away their own autographed cards. And that’s just to name a few. Kyanime Prime Members are expected to fill out an application on Pony Canyon’s special site for an opportunity to receive the Christmas cards. This is a limited event that opened up earlier this week and will run until 14 December at 11:59 p.m. JST on the dot.

This event is limited to Kyanime Prime Members only. If you are not a member, fear not, because this isn’t the only major thing Pony Canyon is rolling out. Non-members can expect Pony Canyon to roll out the highly-requested six-disc box set commemorating singer Yuki Saito’s 35 years in the business, which was announced just last month. These Christmas presents might not be your traditional Rudolph the Red-Nosed Reindeer gifts, but for Japanholics everywhere it’s exactly what you might need to deck the halls this year.