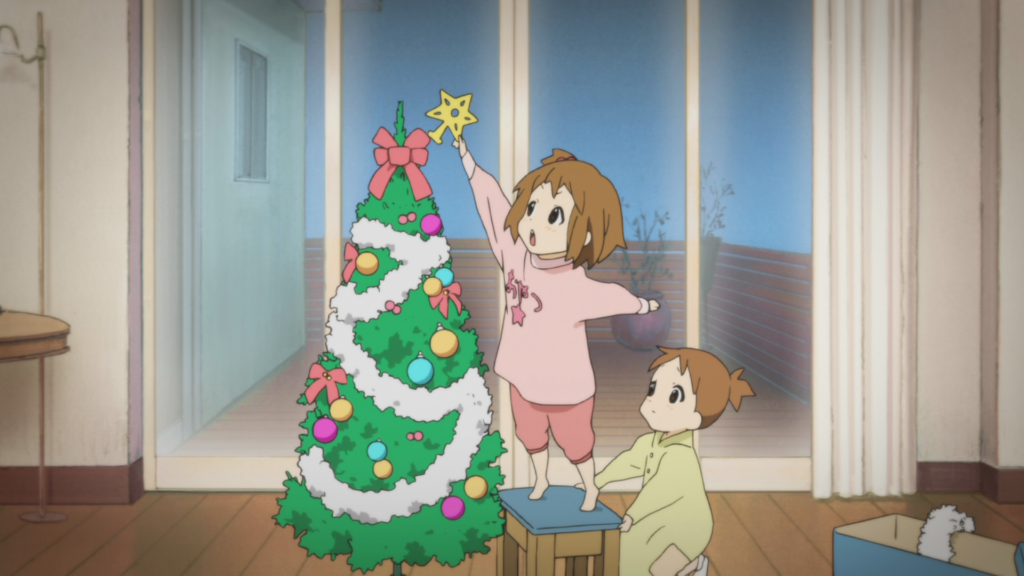 Japan has always celebrated Christmas in its own uniquely Japanese way. For example, you may have heard about the fried chicken Christmas meal: possibly the most successful KFC promotion ever. Japanese folks also have a thing for Christmas cake (although, the Japanese version isn’t fruitcake but strawberry-covered). There’s also the idea that Christmas is for couples. Of course, they have also adopted (and adapted) Santa Claus, Christmas trees, decorative lights, wrapped gifts, and other international holiday traditions which they picked up from overseas.

Anime loves Christmas as well, judging from the number of series I’ve seen with Christmas episodes. Just look at these cute, funny, and even touching anime episodes: 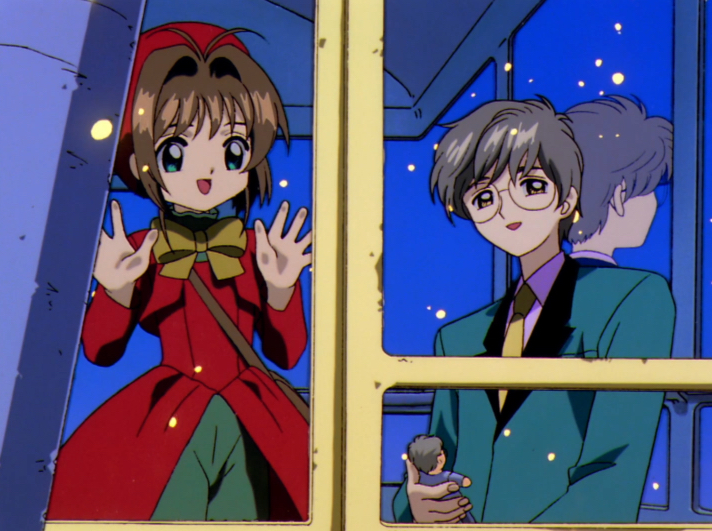 Cardcaptor Sakura is a magical girl series, not a romantic comedy. But Sakura still gets a taste of Christmas romance in episode 35, Sakura’s Wonderful Christmas. (Crunchyroll)

It’s a good episode for nurturing Sakura’s giant crush on Yukito. She starts the episode not knowing what to get him for Christmas. By the middle, the two of them are on a ‘date’ of sorts (with Tomoyo, Meiling, and Syaoran tagging along) at an amusement park.

After the inevitable Clow card battle, the two of them enjoy a Ferris wheel ride together. Meanwhile, Kero provides magical glowing fake ‘snow’ for extra sappy Christmas atmosphere. Incidentally, Tomoyo tells Sakura she had no trouble figuring out what to get her for Christmas.

For much of Japan, snow on Christmas can be elusive. That’s because Japan dips into the subtropics. It may get cold, but many areas won’t get even light snow.

The seventh episode of K-On!, titled Christmas!, features a white Christmas, sort of. (Hulu and Netflix)

The episode starts with a flashback with Yui and Ui. The younger Hirasawa sister wishes for a white Christmas. Yui attempts to make it come true by ripping apart a pillow for fake ‘snow.’ The rest of the episode features a big typical holiday party with plenty of food, gift exchanges, etc. Yui ends up in a skimpy Santa outfit, but she’s not bothered by it. Sawako-sensei then tries to force easily embarrassed Mio to wear it.

The whole ‘Christmas couple’ thing gets inverted when Sawako reveals she’s miserable without a boyfriend. Near the end, Yui watches as it actually starts to snow. 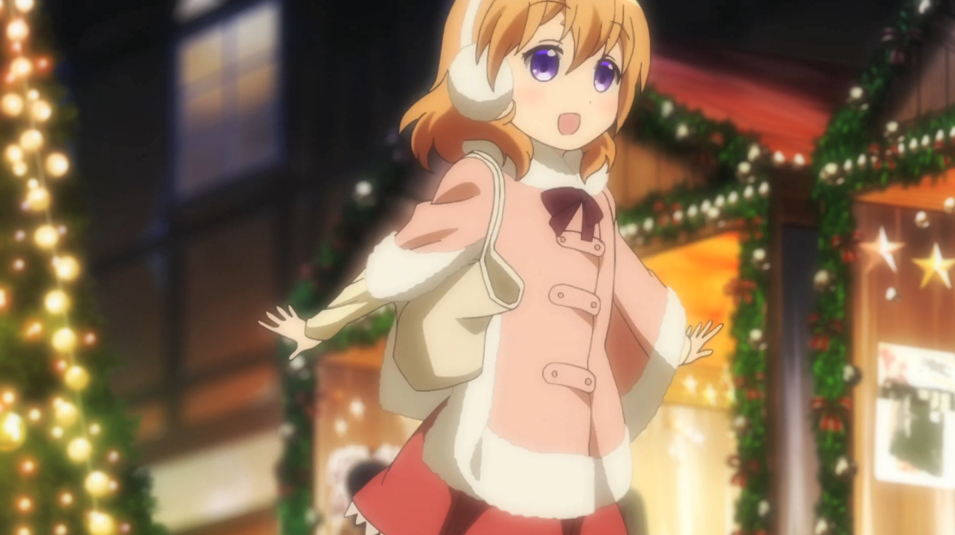 Is The Order A Rabbit? celebrates Christmas in episode 11, ‘The Girl Dons A Red Coat and Drives a Team of Rabbits Across the Christmas Eve Night Sky.’ (Crunchyroll)

Interestingly, you won’t find very much of the typical Japanese-style Christmas stuff in this ridiculously cute series. That’s because the town is based upon Colmar, at the border region between France and Germany.

The first scene takes place at a German-style Christmas market, where the girls do some holiday shopping. The bulk of the episode features a party at Rabbit House Cafe. Cocoa wants to be Santa for her adopted ‘little sister’ Chino. The whole thing is cuteness on steroids.

The Christmas episode of Lucky Star, Episode 11: Various Ways To Spend Christmas Eve, (Funimation) wanders all over the place. But of course, it’s all the more hilarious for it.

Surprisingly, the episode avoids the typical ‘holiday party’ theme. Instead, we get jokes about Santa breaking-and-entering into houses. Because Kagami and Tsukasa are shrine maidens, we also get commentary on the fact that Japan is a non-Christian nation which celebrates Christmas.

And finally, 27-year-old teacher Kuroi-sensei buys a Christmas cake on 26 December to prove that single people over 25 aren’t ‘leftover.’

What About The Fried Chicken? 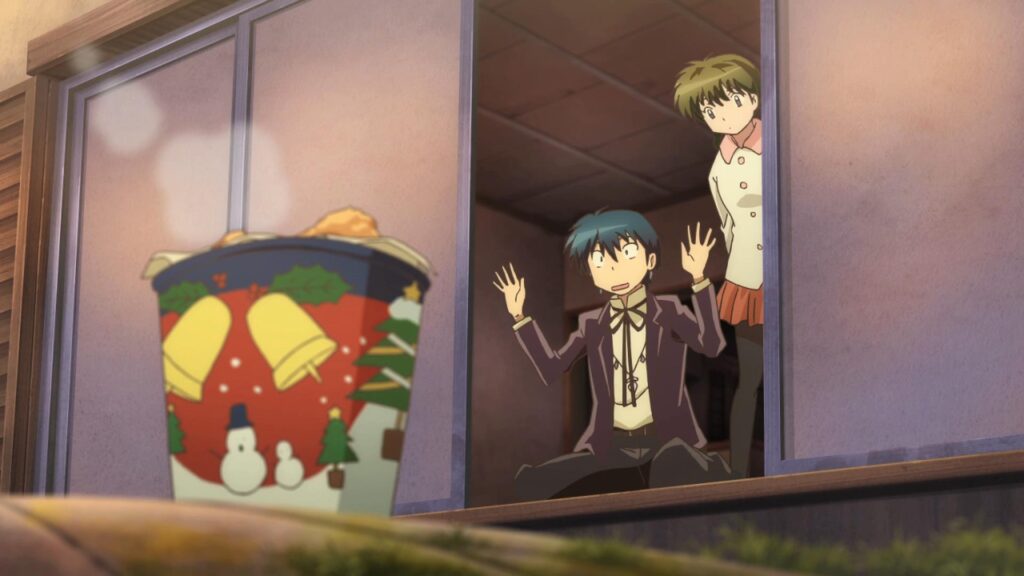 KFC (or a generic version of it) does show up in at least one Christmas anime episode. Episode 22 of Kyoukai no Rinne is titled Christmas Surprise! (Formerly on Crunchyroll; currently on HIDIVE.)

Once again, we see the ‘Christmas couple’ theme. However, because it’s Rumiko Takahashi, the romance comes with some twists and physical humor tossed in. It’s also supernatural.

The ‘surprise’ is an abandoned house which traps several of the main characters inside. It seems that the house wants a Christmas party, and one of the ways to appease it is… a festive bucket of fried chicken.