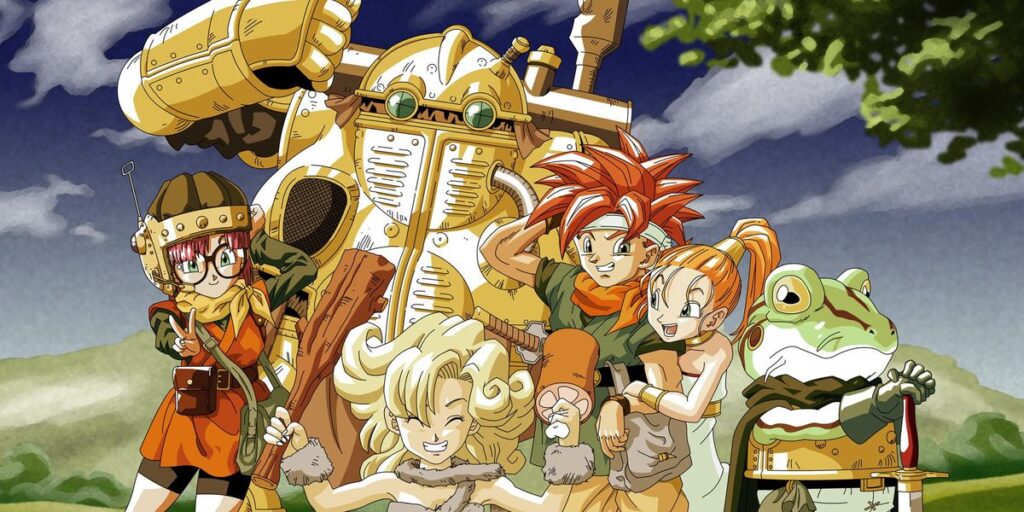 Dig into the overgrown weeds of any old JRPG discussion thread on a gaming forum, or just peak at the manic diatribes game players scrawl onto Twitter today, and you’ll largely be told by people who’ve been dedicated to their controllers for decades that you need to play Chrono Trigger.

Going off mass critical reputation, Chrono Trigger probably ranks just under Final Fantasy 7, and the oldest of these Video Game Sages will tell you why Trigger‘s actually better than Final Fantasy 7, even if you didn’t ask!

Ultimately, this Chrono Trigger review wasn’t written to determine where it ranks in the imaginary pantheon of Japanese Role Playing Games any ‘real gamer has to play’. Unlike the overbearing chiding for not playing it yet delivered to you in a string of tweets by ‘SuperSaiyanCloud’, we’d like to point out this Hall of Famer is still perfectly playable and every bit as charming today.

There is no need for the nostalgia goggles.

The one-off Chrono Trigger came about after Final Fantasy creator Hironobu Sakeguchi and Dragon Quest creator Yuji Horii went on a research trip together in 1992 to study the newest developments in the world of computer graphics. We should mention some rando named Akira Toriyama who created some random cartoon called Dragon Ball had accompanied them, and they felt the spark to create something unique.

Development would begin the following year, with fellow heavyweight Nobuo Uematsu and future legends scriptwriter Masato Kato and composer Yasunori Mitsuda getting drafted along the way. The game’s original Super Nintendo release would manifest in early 1995 to instant acclaim. The game was essentially crafted by the JRPG supergroup to end all JRPG supergroups, and their combined talent, expertise, and artistic sensibilities still thoroughly shine when playing the game even now.

Being the diehards for these cretors that we are, we just had to write our own Chrono Trigger review.

Chrono Trigger launches quickly into what might be the most delightful introductory hour to any JRPG, using its colorful and since-iconic medieval festival setting to tease the player of the whimsy to come in their adventure. Like any Ye Olden Times town-wide celebratory affair, you’ve got your merry-making-men and your carnival games, but also giant fightable Neko Robots and a time machine that goes amok.

That haywire time machine, by the way, blasts Crono, our protagonist, and these other primo Toriyama cut-ups all throughout time. Cavemen times and Mad-Maxian futures alike are lovingly depicted via distinct pixel artwork that’s still quite stunning to eyes when you spend some time with it. The Jukebox’s worth of playful tunes from Nobuo Uematsu and Yoshinori Kitase fit these backdrops like a glove, and evoke a unique sense of place and time to each local you visit, often drawing from Final Fantasy’s unique Sci-Fi fantasy blend.

To be perfectly clear, with Chrono Trigger being a JRPG released in 1995, you’re going to have to stomach that oh so dreadful turn-based gameplay that Final Fantasy dropped after its first PS2 outing. This Chrono Trigger review can’t convince you to like that style of play if you don’t.

If you do like turn-based gameplay, or you are at least open to the idea after realizing you spent days fighting a giant monkey in Sekiro, the good news is that Chrono Trigger‘s one of the most approachable out there. Its real-timeturn-based system brings an active action bar to the game. That means that during a battle, the longer you take, the more turns the enemy will receive. If you now prefer a more relaxed approach, there is also the Wait mode, where if you’re in a command menu (like choosing an item or tech to use) time effectively stops.

The game also drops random battles entirely and instead incorporates fixed places for enemy locations on the map; your character levels will naturally progress as you travel through time. In other words, there is no need to grind.

Lots of the bosses have fun gimmicks that aren’t too difficult to figure out, which simulates some variety in your base JRPG gameplay. Honestly, if you enjoy Pokémon battles, you’ll be at home here.

Compared to a mainline Final Fantasy game, Chrono Trigger’s a little light on the story, less likely to jerk on your tears. However, you can actually beat this game in under 30 hours (if you don’t care about spending countless hours on discovering all twelve endings), with no time being wasted on grinding or nonsensical JRPG melodramatic convolution. Each minute in this relatively short adventure’s tight, every step through time precisely planned and impeccably designed.

Though you might not cry over what happens to party-friends Frog, Magus, and Ayla, you’ll come to treasure their peculiar company. They are much more lively than most SQUARE fare.

Many call Chrono Trigger a flawless game, and this 202X Century Chrono Trigger review doesn’t disagree with that assertion. It may be more limited in scope than its Dragon Quest and Final Fantasy cousins, but this concentrated bit of excellence feels especially fresh in today’s sequel- and remake-filled game climate.

You can play Chrono Trigger on PC and mobile, but we recommend hunting a DS copy if that’s an option for you.