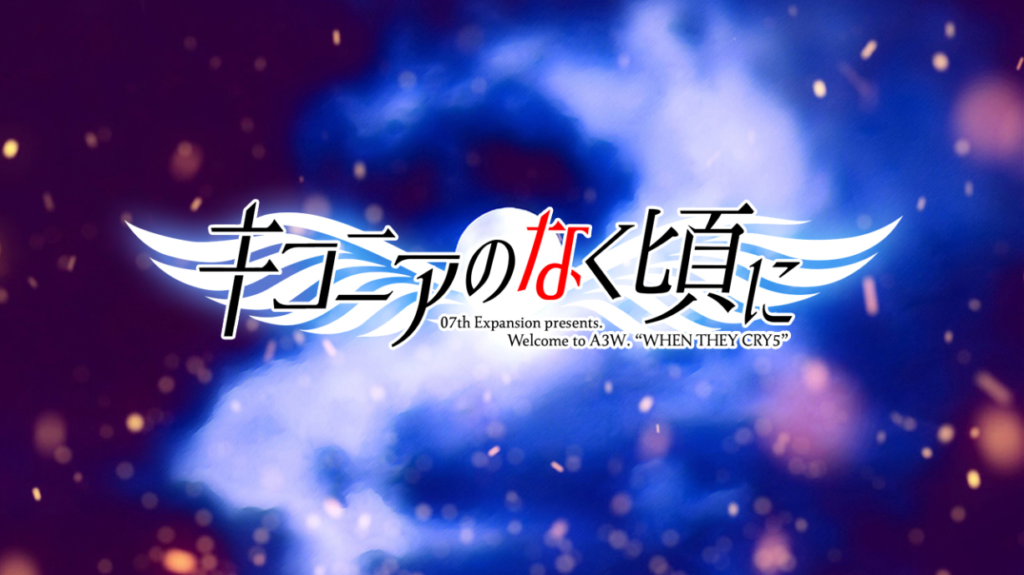 As if to ease anxieties surrounding the upcoming release of Ciconia When They Cry, the highly anticipated fifth entry in the When They Cry ‘sound novel’ series, 07thExpansion put out a demo of the title last week, with an English version available via translation group Witch Hunt.

While some worries can’t entirely be squashed by a demo due to its length, this was a welcome move. And while the demo version only lasts for around half an hour (although that depends on how fast you can read), it’s safe to say that a strong first impression was made.

What’s immediately noticeable upon booting up the Ciconia demo is the massive jump in graphical and visual fidelity between this title and the last entry in the series, Umineko When They Cry.

The demo starts out in a bombastic fashion, as images fly onto screen alongside punchy, short lines of text while an upbeat, militaristic soundtrack plays.

But what you’ll immediately notice is that this text isn’t static, displayed in the same place at the bottom of the screen as other entries in the series have done. Rather, it moves about the screen in tandem with the images, creating a feeling of speed and ferocity that perfectly matches the mood.

These background images also twist and morph in a type of faux animation, such as one moment where an arm suddenly becomes equipped with a massive armored gauntlet in a flash of light. Images also fly in from off-screen with fancy spin and fade effects, once more matching the tone of the narration perfectly.

Then, the narration gives way to the opening movie, animated in 3D yet perfectly incorporated into the game, which is largely composed of text and 2D images, with almost no jutter or discernable separation between the two. It’s a perfect way to highlight how far technology has come since the release of Umineko When They Cry, and it makes for a new-age When They Cry experience that I thought possible.

It’s hard to understate how effective this incorporation of new technology into Ciconia When They Cry, as glimpsed in the demo, is when it comes to the experience of playing the game itself. Not only does it make the moment-to-moment gameplay more exciting, but it also perfectly matches up with the more action-focused storytelling at play here.

07thExpansion have been able to achieve this thanks to Ponscripter, the new game engine that they are using instead of NScripter, which was used to program all of the previous games. In fact, this Ciconia demo was apparently conceived in the first place just to test out Ponscripter and how well the game would run in it – not to tease fans (at least, not initially).

That being said, no one comes to a 07thExpansion game expecting the latest and greatest in visual novel technology – if anything, how impressive Ciconia plays and feels in this demo is just an added bonus. After all, let’s not forget that the characters in Higurashi When They Cry once looked like this: 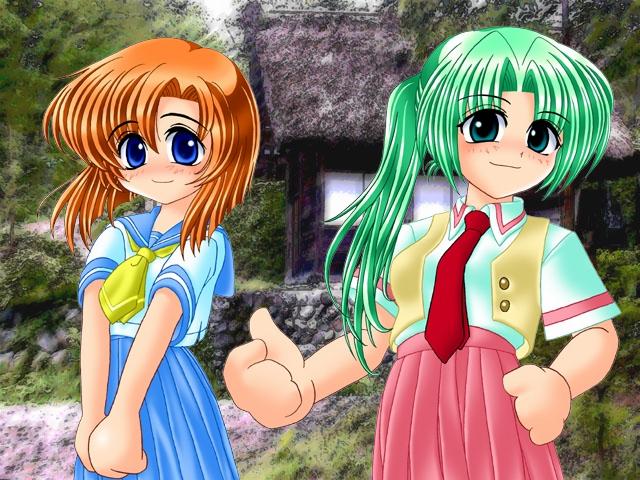 Story and characters have always been the two most important and compelling elements of previous When They Cry and 07thExpansion games, which is precisely why so many were worried when Ryukishi07 announced that Ciconia would have more of an action focus this time around, as distinct from the psychological horror of Higurashi When They Cry and Umineko When They Cry.

My key concerns going into this Ciconia demo were, therefore, nothing to do with how awesome the game would look, but rather surrounding the quality of the story and characters. Firstly, would this more action-focused storytelling prove it’s worth, despite being such a departure for the series? Secondly, would the characters of this story prove as compelling as characters in previous titles have been?

While I’d love to have come away from this demo with both of my concerns completely pacified, unfortunately, that’s not the case.

This is because while the fancy graphics enabled by 07thExpansion’s use of Ponscripter do make the main portion of the demo, a fight between the characters of Miyao and Jayden, pretty compelling on a visual basis, Ryukishi’s writing isn’t entirely effective. 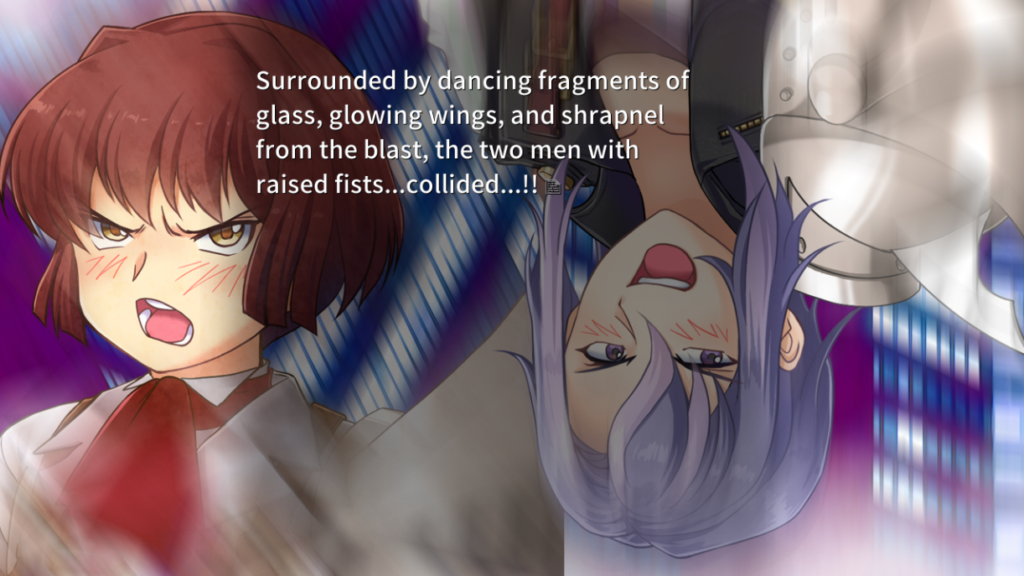 The thing is, I’m not entirely sure why. Maybe his writing style simply isn’t suited for action in the first place. Maybe he tries too hard to craft visual metaphors when they aren’t needed. Maybe he doesn’t spend enough time in his characters’ heads, like other successful action visual novels such as Fate/stay night and Deus Machina Demonbane do.

Perhaps it’s also due to the fact that I can’t pinpoint exactly what I don’t like about Ryukishi’s action-focused writing that I’m actually willing to write all of this off to several external factors.

Firstly, it must be said that Witch Hunt’s translation does, at times, feel a little awkward in terms of phrasing and structure, which isn’t great considering that they are leading the charge alongside MangaGamer on the English version this time around.

There’s also a distinct lack of music in the demo, which is disappointing given how excellent the work of 07thExpansion collaborators dai, zts and others has proven in the past. That’s not to say that there isn’t any music in the demo at all, however – rather, there are a handful, but they all feel largely similar to each other in their militaristic pomp and flair.

Even so, it’s possible that these issues will be resolved in time. We’ve still got about a month left before Ciconia’s release in October, so perhaps during that time Witch Hunt will refine their translation and the project’s composer will have finished writing some more interesting arrangements. This is a demo version, after all.

If these issues are resolved, then it might even be possible to smooth over the flaws in Ryukishi’s action writing. Heck, Ryukishi might even be using this time to refine his own writing in response to feedback, although he has said in the past that he’s done with the script for the time being.

So while I’m not entirely sure that Ryukishi has proven the merits of action-based storytelling over what we’ve seen in the past, this doesn’t really worry me. Time can fix this, at least to a certain extent. And if we add characters into the mix? Then I’m hardly worried at all.

This is because while we only get to see a handful of the game’s seemingly large cast in the Ciconia demo, what we’ve seen so far has me fairly confident that Ryukishi is set to match, if not exceed his past efforts in terms of characters.

We should start off with our protagonist Miyao Mitake, who is representing his nation of Japan as a superpowered ‘Gauntlet Knight’ at this year’s ‘Battle Standard Festival of Peace’ in Tokyo. He’s hot-headed, very up for a fight, and has a complex about his height; but he’s also analytical and just a little bit of a tsundere. 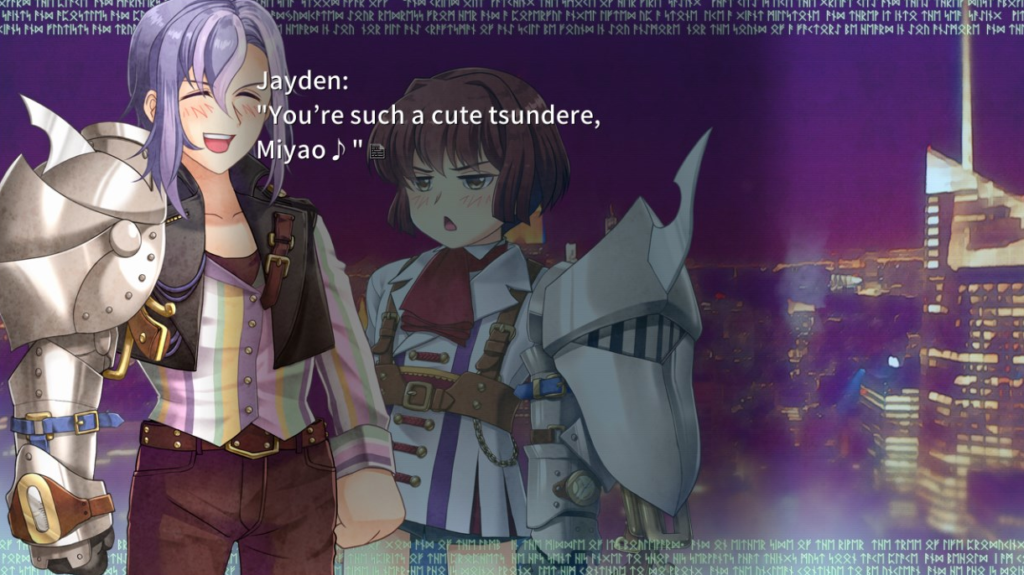 I say ‘he,’ but Miyao’s gender is actually a little bit of a question mark at the minute. This is because while Miyao sports a traditionally female character design and has been referred to by official sources as female multiple times in the past, the Ciconia demo suddenly sees Miyao referred to with male pronouns.

Your first thought might be that is simply a translation error, but I wouldn’t be so sure. Witch Hunt are known for their accuracy and respect for the original source material, plus there’s also the fact that they are in contact with Ryukishi himself for the translation this time around. To be honest, I highly doubt that neither Witch Hunt nor Ryukishi would’ve let such a glaring error slip through the net.

Rather, I’m willing to bet that the mysterious nature of Miyao’s gender will become a key part of the story of Ciconia, as well as their own character arc. That’s really exciting, given that Ryukishi already outlined some really interesting ideas surrounding gender and gender identity with the character of Lion in Umineko.

There are other Umineko characters who are similar in this respect, but Lion is by far the most compelling and well-developed. Despite playing a relatively minor role in but one ‘episode,’ Lion has become many fans’ favorite character and was, arguably, one of the reasons why 07thExpansion has enjoyed such a massive resurgence in popularity in the west in recent years.

So, it’s pretty safe to say I’m quite interested in Miyao as a character. But what about the others who appear in the Ciconia demo? Well, we have also have Miyao’s partner and opponent for the majority of the demo in Jayden, who might not be as immediately interesting as Miyao, but still makes for a charismatic side character who’s flirty remarks put into question his true relationship with his ‘partner.’

Some other characters also appear towards the end of the demo as part of the squads taking part in the ‘Battle Festival,’ who all have their own distinct but likable personalities and quirks. I especially like Chloe, who reminds me a lot of Cornelia from Umineko.

That being said, characters have always been one of the enduring strengths of the When They Cry series, so it’s not that much of a surprise to see that Ciconia When They Cry also succeeds in this way.

However, the fact that a mere half-hour demo was enough to get me invested in these characters and where they end up is surely a testament to how Ryukishi’s skill as a writer – especially compared to his decisively more mixed action scenes.

The Future of Ciconia

The reason I say ‘where they end up’ is, in turn, because of the ominous way in which the Ciconia demo bows out. After having a bit of banter, Miyao and the other squads head off to practice for the ‘Battle Festival,’ which is explained as a tournament of sorts to celebrate continued peace in the world of Ciconia after the events of World War III. Then, this quote from one James F. Kennedy appears:

The use of this quote calls into question how the Battle Festival will turn out, as Kennedy’s ‘walls of peace’ enjoy a clear parallel with Ciconia’s so-called ‘Battle Standard Festival of Peace.’ The question is, how will this peace come to an end?

But even without this fairly obvious hint, we all knew that something horrible was going to happen anyway. These When They Cry games have, after all, always been about rising up to confront tragedy in an endless cycle, orchestrated by an unknown powerful force. The question is, however, how exactly will this manifest itself this time around, in Ciconia When They Cry?

So while this demo might not have been able to completely satisfy two of my biggest concerns going into Ciconia When They Cry, it certainly did achieve one thing: getting me invested enough to want to buy the game and play it as soon as it releases this October.

In the meantime, you can play the Ciconia demo (Windows and macOS only) via Witch Hunt’s website.