The latest entry in any beloved franchise is bound to be met with a fair bit of anxiety. But when it comes to Ciconia When They Cry, the fifth entry in 07thExpansion’s When They Cry sound novel series, anxiety is perhaps at a peak – not just from fans, but also from series creator Ryukishi07 himself. The game’s opening movie isn’t exactly helping to smooth over these anxieties, either.

Ciconia When They Cry’s opening movie was made available via 07thExpansion’s official YouTube channel on July 14, after an initial announcement via Twitter on July 11.

The timing of this move, coming just days after the game’s delay to September, seems to signal a desire on 07thExpansion’s part to tide fans over until the release, as well as to smooth over anxiety surrounding the game’s release and plot. Unfortunately, it seems to have done the opposite.

Opening movies for the When They Cry games have, in the past, been excellent. Usually, they’re full of interesting, thematic visuals crammed full of symbolism and relevant imagery to the plot, all set to a poignant soundtrack. Just check out the opening movie for the recent remaster of Higurashi, Higurashi When They Cry: Hou (spoilers):

When it comes to the Ciconia When They Cry opening movie, dai and zaki’s theme song definitely isn’t at fault here (it’s awesome). But it is let down massively by the frankly boring and seemingly uninspired visuals at play here.

The opening movie can largely be divided into two halves: the first, which shows us a load of static images that introduce the various ‘squads’ and the characters in them, and the second, which is just two beams of blue and red light chasing each other in the middle of some CG buildings. Really riveting stuff.

What makes it even worse is that we’ve seen some of these visuals before. In particular, the character art and sprites for the various ‘squads’ that were used all the way back in the initial reveal trailer for Ciconia When They Cry.

That’s to say nothing of the protagonist Mitake Miyano’s pose that has been present on basically all of the key visuals for the game, as well as the CG buildings which have been a constant since the initial announcement that there even would be a When They Cry 5.

To be fair, a lot of this imagery might have been reused because it genuinely is the best thing to accurately represent the game, and I am aware that there are such things as motifs. But the least that 07thExpansion could do is present these reused elements in a new, fresh and exciting way – by doing so, they could have avoided the seemingly uninspired Ciconia When They Cry opening movie that we’re going to get.

Of course, I could be coming at it from the completely wrong angle. As MangaGamer’s official synopsis for the game hinted, Ciconia will focus less on mystery than it will on action, which marks a big change for the When They Cry series. This is, in turn, what is causing both fans and Ryukishi07 himself to worry.

Ciconia When They Cry’s opening movie isn’t exactly selling me on this new action focus, however – mainly because the little action we do get is limited to two beams of light floating on a CG background. If this opening movie has abandoned symbolism and meaningful imagery in order to try and communicate some breakneck action as per the game’s actual content, then, it’s not exactly achieved this goal. 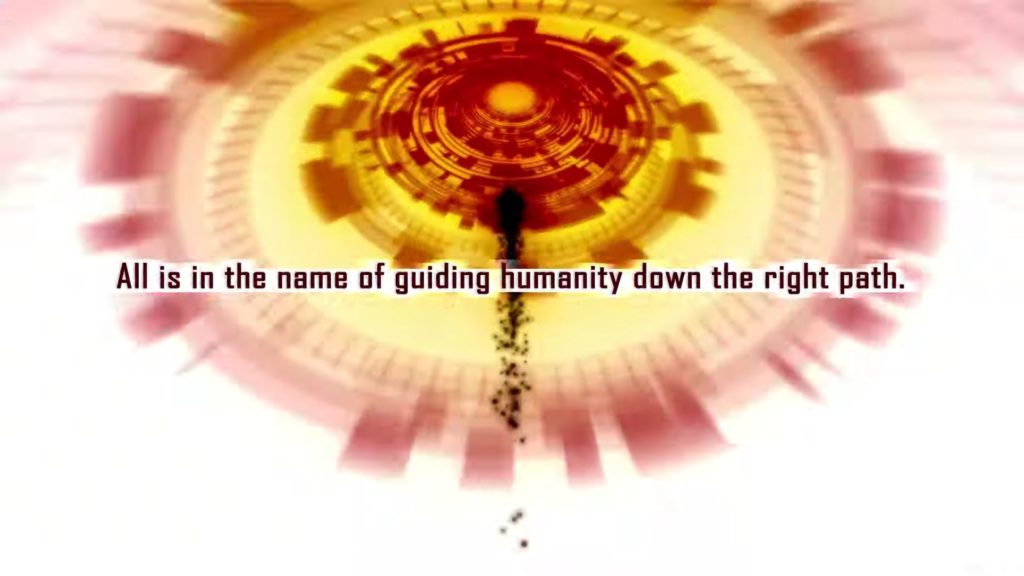 However, it is worth mentioning that the end sting of the opening movie has piqued my interest. It’s an interesting visual, with a beam of light heading into a seemingly endless tunnel, which immediately brings to mind divergent timelines and the Butterfly Effect. The opening movie’s declaration that “All is in the name of guiding humanity down the right path” is also ominous, but has me interested.

I suppose that we won’t know what any of this really means until we get our hands on the game proper this September. Even then, don’t forget that Ryukishi07 likes to set up ‘Question Arcs’ first and then ‘Answer Arcs’ second – meaning that he might not let the cat out of the bag until the second Ciconia game, When They Cry 6, just as he did with Higurashi and Umineko.

In turn, perhaps playing the game to completion and then coming back to this opening movie will reveal tons of hidden imagery and symbolism that’ll make me look really stupid. Only time will tell, but – for the moment – Ciconia When They Cry’s opening movie definitely isn’t enough to ease any anxieties.