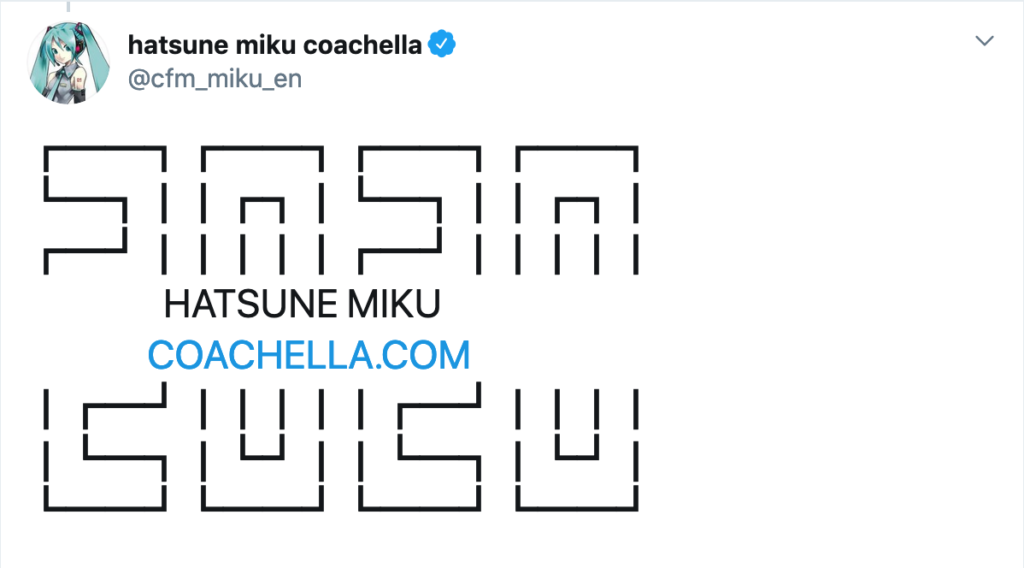 The Coachella Valley Music and Arts Festival announced its 2020 lineup on Jan. 2, and among the dozens of acts from all over the world set to appear over two weekend in Indio, CA. in April, and among them are two prominent Japanese acts making their debuts at the gathering. Vocaloid avatar Hatsune Miku and J-pop performer Kyary Pamyu Pamyu will perform on the Friday and Sunday, respectively, of the event this Spring.

Coachella is arguably the most famous music festival in the United States — if not the world, (multiple venues in Japan actually livestream it while it happens every year, while anyone can tune in from their computer if they like). Music fans anticipate who will appear at the fest — and what size font they’ll be on the poster that comes along with it — for a large part of the year, even if they aren’t heading out to the California dessert to take part in it all.

Miku and Kyary Pamyu Pamyu’s forthcoming appearances mark major moments in both of their careers. For the digital avatar of the singing-synthesizer technology Vocaloid, it follows a much-anticipated European tour unfolding during Winter 2020. It’s important to note that she’s not the first holographic artist to appear at Coachella, as back in 2012 the festival introduced the world to the Tupac Shakur hologram. This time, though, the technology won’t serve as a guest, but the main draw.

Kyary Pamyu Pamyu, meanwhile, arrives at Coachella at an interesting moment. She released her last album in late 2018, and saw the start of a new personal era in 2019, including appearances at other international music festivals. This, though, marks her biggest opportunity outside of Japan to date.

In recent years, Coachella has been featuring more high-level Japanese acts. Two years ago, rock band X Japan performed (at the same time as Beyoncé, which wasn’t so great for Yoshiki and co.) and last year Perfume appeared.