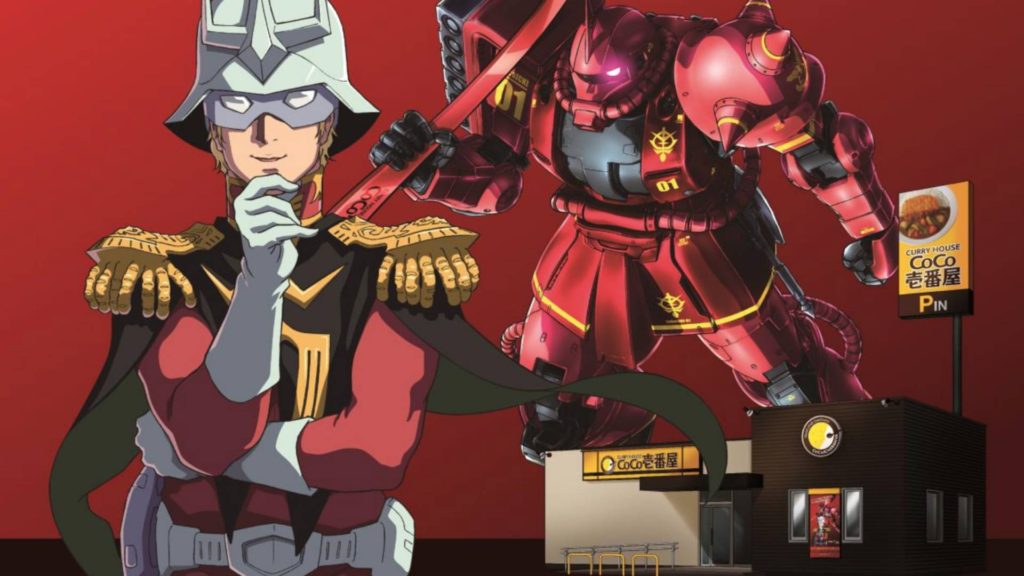 Curry is a hotly-debated subject here at OTAQUEST, as our members of staff constantly clash over which chain is the best; that being said, it seems as though Char Anzable may have arrived to put a stop to the in-fighting once and for all. Much-loved nationwide curry chain Coco Ichibanya recently unveiled a new collaboration campaign with the Gundam franchise to celebrate the sixth Origin movie, Rise of the Red Comet, which retells the events of the original 1979 Mobile Suit Gundam anime.

The campaign will run from April 17 to May 31 in Coco Ichibanya stores across Japan, and there are some truly sweet goods on offer. Orders over 900 yen can be used to enter a ticket lottery on the official collaboration website which will give you the chance to earn some of the bigger prizes.

First up we have the somewhat plain but practical official Gundam x Coco four spoon set, one of which is colored a brilliant red to match the motif of Char the Red Comet himself. I would certainly love to devour my Coco curry with these, and wouldn’t mind applying that experience to my cereal as well. 100 of these are up for grabs. Next, we have some more standard prizes. Thirty lucky participants will win this fantastic Char figure, which is remarkably well sculpted and detailed for a prize figure. It also comes with a special Coco-themed backboard, making it truly one-of-a-kind. A High-Grade Gunpla kit of Char’s MS-06S Zaku II is also on offer. But this isn’t the same as what you can buy in stores already, oh no – not only does it come with special Coco decal stickers, but also a stylish-looking red spoon. What’s more is that 1000 participants will receive this, the biggest prize pool of them all, which makes me all the more keen to participate in this campaign. Furthermore, 500 participants will win a 1000 yen voucher for Coco’s, meaning that even if you don’t win some of the sweet Gundam goods, you’ll at least get some free curry – and that curry always tastes the best. Speaking of free, customers who spend over 900 yen during this campaign will be given a free self-help book authored by Char himself, titled “Char Anzable’s Drill.” There are four to collect, and when checking out you can actually ask for a particular version of the book instead of a random one, making them even easier to collect.

So will Char Anzable make me switch my loyalty from Gogo Curry to Coco Ichibanya? Most likely, if only for a while. There’s not much more I like on this planet more than mecha and curry, after all.

Editors Note: It should go without saying that CoCo Ichibanya is the superior curry, and it’s unfortunate that anybody who considers themselves part of our team would hold any opinion that GoGo Curry holds any value in comparison.