There are few anime events as infamous as Comiket. Held in Tokyo every year in August and December since 1975, it has now become the largest fan convention on Earth, typically pulling in about half a million people over each three-day span. The 2019 event pulled in 750,000 people, all ready to buy plenty of self-published comics, video games, music and more.

Here’s a brief explanation of how doujinshi works in Japan. Let’s say you’d like to create your own manga, featuring Vegeta from Dragon Ball Z and Izuku from My Hero Academia going on ridiculous adventures through the Japanese countryside. Now, let’s say you’d like to sell your manga in Japan for profit.

Sounds like that could never happen, right? The companies behind those characters would sue you instantly.

Except they wouldn’t, and selling doujinshi in Japan featuring other people’s characters is perfectly legal. It’s considered parody, and suing people in Japan isn’t popular. Also, big-time manga artists often start out as doujinshi artists, and they honestly respect these newcomers for their efforts and talent.

Comiket has been brought up in plenty of anime series, most famously an entire Lucky Star episode dedicated to explaining the perils newcomers face when attending the insane gathering of otaku. There aren’t many anime series, however, completely dedicated to Comiket. That’s where Comic Party comes in.

The series follows Kazuki Sendou, a high school student with a smidgeon of artistic talent. Invited by his friend Taishi Kuhonbutsu to visit Comiket, Kazuki has his first experience with doujinshi, impressed by the artists and their works. Inspired to create a fan comic himself, his childhood friend Mizuki Takase attempts to talk him out of it, reminding him that anime fans are smelly and terrible.

Seeing how much Kazuki enjoys his new hobby, however, she eventually decides to support him in his new endeavor, even going so far as to cosplay at the event itself. 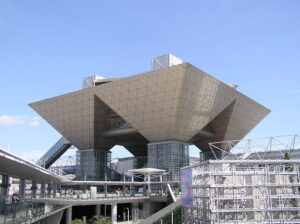 The series also spawned a Comic Party convention, which also took place at the very same venue where Comiket is held. Called Tokyo Big Sight, you’ve seen it, whether you realize it or not. It has a tendency to pop up in plenty of anime series relating to doujinshi or not.

The series is fast-paced, it’s funny, and there are nuggets of truth everywhere relating to both the business side and creative side of making fan comics. Who knows, Comic Party might inspire you to travel to Tokyo for Comiket someday. It’s something you’ll never forget, even if you’re just going out of curiosity.

Though, I’d advise you to get there in the afternoon. Unless you want to wait in line for about seven hours to get in. I say this, sadly, from personal experience.

Originally, Comic Party was a dating sim released in 1999  on the PC with some rather…risque content. However, the game was re-released soon after with all adult content removed for Dreamcast, Windows and PSP. Sadly, the game never received a western release.

The game itself was a first person point-and-click style game, with the player making decisions relating to Kazuki’s schedule before each Comiket event. As Comic Party progresses, the player’s choices affect how quickly Kazuki can complete his comics, how many copies he sells at each convention, and which girl he ends up dating.

Between 2001 and 2005, a Comic Party manga was serialized in Dengeki Daioh, the monthly manga magazine responsible for bringing Gurren Lagann, Eromanga Sensei and A Certain Scientific Railgun to the masses. The manga series was created by Sekihiko Inui, a doujinshi artist to this day. You could say he was overly qualified for the position. 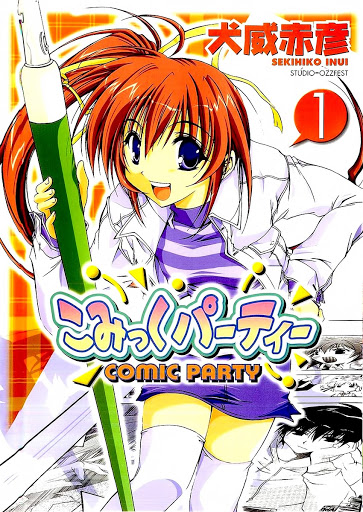 The manga series was released over five volumes, and was licensed in North America by manga staple Tokyopop.

Keeping with the theme of fan comic creation, a number of Comic Party manga anthologies have also been published, with various artists donating chapters in their own styles. Square Enix and Sony Magazines also contributed chapters. Although it was released in the west by Central Park Media, only three out of nine total volumes were published in English.

In 2001, a 13 episode Comic Party anime TV series aired in Japan, focusing more on the creation of doujinshi and less on the romantic aspect of the game. In 2004, the series was released in the west on DVD, with Right Stuf making a large number of changes to the script in order to Americanise it.

The Comic Party anime series was animated by OLM, the animation studio responsible for Pokemon, Berserk and Wedding Peach.

A 13 episode sequel, Comic Party Revolution, was released in Japan in 2005. The series introduced certain characters that were omitted from the original TV series, and focused more on the female cast rather than Kazuki alone. It was licensed by ADV in North America, and no cultural changes were made to the English dub this time.

Sadly, Comic Party and Comic Party Revolution aren’t currently available to stream. However, this doesn’t mean you’re completely out of luck! You can find the first season of Comic Party in a handy DVD box set from Amazon.

If you’re interested in the manga, copies can be found on Amazon for an extremely low price. Hopefully a digital version will be available soon!

The first issue of the Central Park Media translated anthology series can also be found on Amazon.