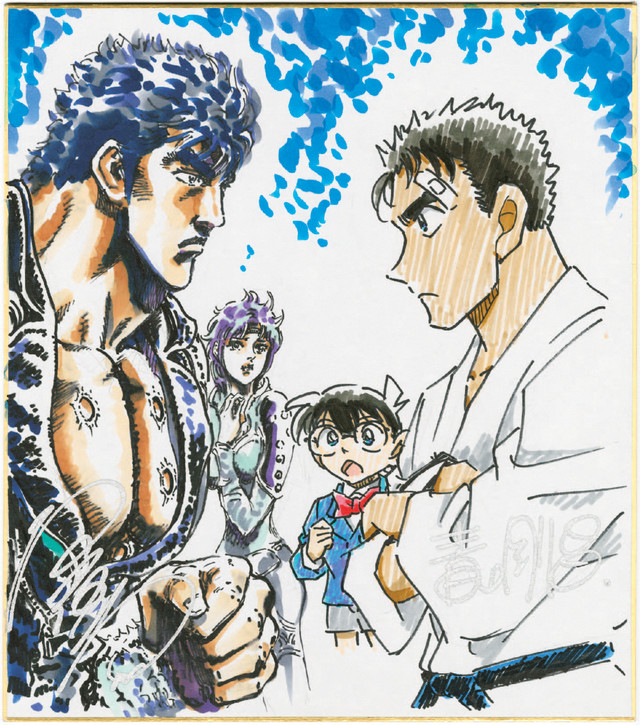 Detective Conan creator Gosho Aoyama has been unusually outgoing in the past couple of weeks, as he has done multiple interviews with several fellow mangakas. Just last week saw the launch of a new collaboration between him and Adachi Mitsuru to promote the upcoming Mix anime adaptation. Now, Conan and Mix together – nothing much out the ordinary there. But how about a Detective Conan and Fist of the North Star collaboration? Now there’s something that grabs my attention.

Aoyama sat down with Fist of the North Star Tetsuo Hara creator to work on a new illustration together featuring Kenshiro and Conan from both of their respective well-known series. While the illustration itself is pretty cool, what’s more interesting is this behind the scenes video released by Toei, showing the two masters’ methods. Check it out below:

The difference between the two creators’ art styles is pretty obvious from the finished piece, but this video offers a rare insight into how those differences arise. Aoyama’s more simplistic and cartoonish designs are finished quickly with his practiced hand, whereas Hara’s more detailed and darker designs mean that his side of the illustration takes much longer. Both art styles certainly have their merit, but allowing such a glimpse into the creative process really shows just how varied and exciting the medium of manga can be.

Another key thing that comes through in the video is the humility of both artists. When Aoyama embarks on his illustration ahead of Hara at the beginning, Hara can’t help but remark “Ah, a pro’s drawing is amazing after all,” to which Aoyama laughs and remarks that “You’re a pro too, you know.” Hara’s humility despite his success also came through very strongly in EXILE SEKAI’s interview with Hara last month, which I highly recommend.

The collaboration between Hara and Aoyama has also given birth to a new PV for the upcoming 23rd Detective Conan movie, Fist of Blue Sapphire. The PV focuses on the martial arts aspect of the upcoming film, which has been brought to the table by the inclusion of the character of Makoto Kyogoku. And providing narration for this martial arts-focused trailer is none other than Kenshiro from Fist of the North Star. Check it out below:

While it’s certainly weird to hear such iconic phrases as “Omae wa mou shindeiru” and “Hidebu!!” over the top of Aoyama’s Detective Conan, this collaboration is an important one. Hara and Aoyama are separated by a generation, but they have nevertheless both remolded the entire world of popular culture in their own image. Such a meeting of two giants should not be understated.